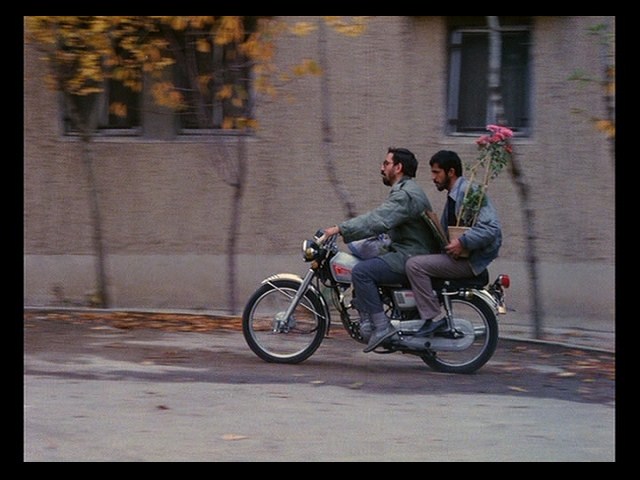 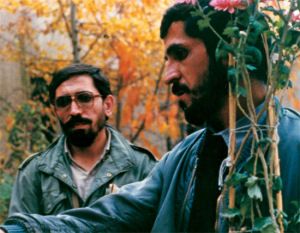 1990 / Close Up – The motorcycle ride of Makhmalbaf  and Sabzian.

Why It’s Key: A convicted imposter finally meets the man he’s been impersonating, and they set off together to visit the family that was fooled.

Hossein Babzian, a bookbinder, emerges from a jail sentence for having impersonated famous filmmaker Mohsen Makhmalbaf in order to ingratiate himself with the well-to-do Ahankhah family, pretending he was planning a movie about them. He’s greeted by the real Makhmalbaf, arriving on his motorbike to take him to visit the Ahankhahs, and filmmaker Abbas Kiarostami and his crew, who have arranged this meeting, are filming the entire encounter from a distance. We hear them saying that Makhmalbaf’s lapel mike is faulty, and notice that the dialogue between Makhmalbaf and Sabzian (“Do you prefer being Makhmalbaf or being Sabzian? I’m tired of being me”) periodically becomes inaudible — on the street, after Sabzian climbson the back of the motorbike, and when they stop briefly for Sabzian to buy flowers for the Ahankhans. Read more 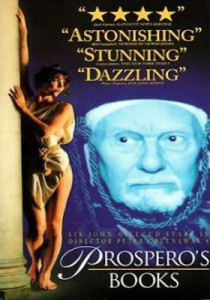 Poor John Gielgud tried for years to set up a film version of The Tempest that would record his performance of Prospero; he finally had to settle for director Peter Greenaway. Gone is any sense of drama or character; the cluttered spectacle yields no overriding design but simply disconnected MTV-like conceits or mini-ideas every three seconds. Don’t expect to enjoy Shakespeare’s poetry: aural distractions constantly intrude, from sound effects, echo chambers, and Michael Nyman’s neoclassical Muzak. And don’t expect to enjoy Sacha Vierny’s exquisitely lit cinematography: double exposures, ugly rectangular overlays, graceless quick cutting, and lots of nude or semiclad extras cavorting in clunky modernist choreography drain all the pleasure from that as well. On the other hand, if you share Greenaway’s misanthropy, you might get some kicks out of watching a cherub piss on everyone in sight. With Michael Clark, Michel Blanc, Erland Josephson, and Isabelle Pasco (1991). R, 124 min. (JR) 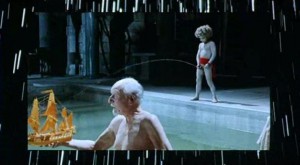