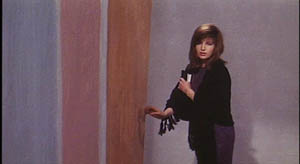 Michelangelo Antonioni’s first feature in color (1964) remains a watermark for using colors creatively, expressionistically, and beautifully; to get the precise hues he wanted, Antonioni had entire fields painted. A newly struck and restored print of the film makes clear why audiences were so excited a quarter of a century ago by his innovations, which include not only expressive uses of color for moods and subtle thematic coding but striking uses of editing as well. This film comes at the tail end of his most fertile period, immediately after his remarkable trilogy consisting of L’avventura, La notte, and L’eclisse; Red Desert may not be quite as good as the first and last of these, but the ecological concerns of this film look a lot more prescient today than they did at the time. Monica Vitti plays an extreme neurotic married to industrialist Richard Harris, and Antonioni does eerie, memorable work with the industrial shapes and colors that surround her, which are shown alternately as threatening and beautiful; she walks through a science fiction lunar landscape spotted with structures that are both disorienting and full of possibilities. Like any self-respecting Antonioni heroine, she’s looking for love and meaning — more specifically, for ways of adjusting to new forms of life — and mainly finding sex. Read more