Radio interview about THE OTHER SIDE OF THE WIND 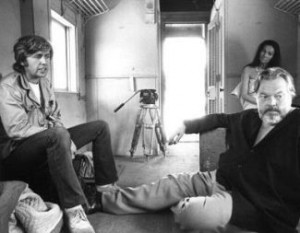 This phone interview (see link below) with Douglas Storm in Bloomington, Indiana aired yesterday. Given all the Buddy Rich extracts, I’m sorry that there wasn’t time to discuss Welles’ own jazz taste (which was oriented more towards Dixieland, at least during the 40s). The clips from the film that are heard, which may be hard to follow in spots, testify to how much the art of Welles as a filmmaker is based on his editing, which obviously can’t be perceived in sound bites. [11/28/18]

Here’s the link of WFHB: 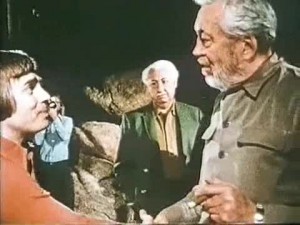 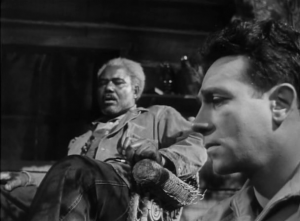 In the introduction to my forthcoming collection Cinematic Encounters: Interviews and Dialogues, I make the argument that although Truffaut’s book-length interview with Hitchcock doesn’t qualify precisely as film criticism, it nonetheless had a decisive critical effect on film taste. By the same token, on Criterion’s very welcome Blu-ray edition of Frank Borzage’s Moonrise (1958), Peter Cowie’s interview with Borzage critic/biographer Hervé Dumont — whose book on the director should be shelved and considered alongside Chris Fujiwara’s book for the same publisher (McFarland) on Jacques Tourneur — primed me perfectly for my second look at this masterpiece, and made it register far more powerfully this time. It certainly performs this task better than Philip Kemp’s accompanying essay, which, in spite of much useful information, falters in its insistence on framing Moonrise through the lens of film noir, and even more when, while rightly praising the character of Rex Ingram’s Mose, the author remarks that “It would be hard to think of another American film of the period where a black man acts as adviser and mentor to a white Southerner.” It’s not so hard, really, if one thinks of Clarence Brown’s Intruder in the Dust (1949) and/or Tourneur’s Stars in My Crown (1950); and it’s even quite easy if, following Dumont’s lead on Moonrise, one regards the Tourneur masterpiece neither as a noir (a lazy escape hatch) nor as a western (as Jacques Lourcelles does), but as a discreet form of German Expressionism, implicitly favouring thoughtful philosophy and metaphysics over simple gloom and doom.… Read more » 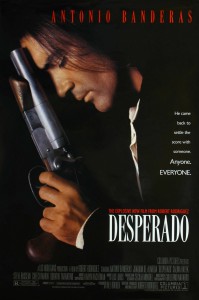 To no one’s surprise but the producer’s, Robert Rodriguez’s bigger-budget spin-off/remake of (and occasional sequel to) his impressive action quickie El mariachi doesn’t stand comparison with its predecessor. On the other hand, Rodriguez is clearly a talent to watch, and there’s plenty to be entertained or impressed by here — fancy, violent action sequences (which gradually develop from barroom shoot-outs to outright war battles); a feisty interaction between hero (Antonio Banderas) and heroine (Salma Hayek) that suggests the influence of Howard Hawks; some enjoyable actorly bits by Cheech Marin, Quentin Tarantino (who’s at least around long enough to tell a funny joke), and Steve Buscemi; an enjoyable villain (Joaquim de Almeida, not a gringo here as he was in El mariachi); a nice Mexican score by Los Lobos; and even a halfway tolerable twist in the plot. What’s mainly missing is the sort of conviction and passion that gave El mariachi its charge; one feels at almost every moment that Rodriguez is fulfilling a contract rather than saying something he has to say. There’s a lot of panache here, but not much inspiration. (JR) 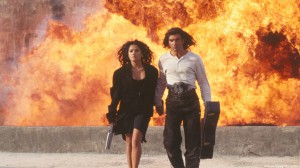