while editing This Is Orson Welles (1991). A particular problem I had

than I had room for. So I figured that if I could write and publish articles

elsewhere that incorporated portions of this material, all I had to do in the

book was allude to them.

Mr. Arkadin has always been the most difficult to research of the

partially because it remained such a painful memory to Welles due

to his friendship with Louis Dolivet, the producer, that he avoided

discussing it. Indeed, there was barely any material at all about it

to work with. So as I tried to expand what I had via research,

By necessity, much of what I included in this article was provisional. 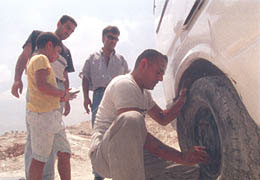 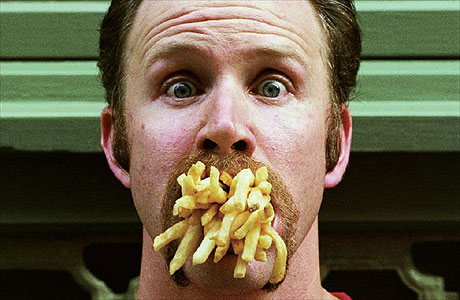 Written by Abu-Assad and Bero Beyer.

Directed and written by Morgan Spurlock.

What do we expect from documentaries? Do we seek to be informed by them or merely entertained? If it’s the former, do we expect some guidance about how to process the information?

The documentaries I’ve seen lately have made me ponder these questions. For example, last week at the Buenos Aires Festival of Independent Film I saw a fascinating Palestinian feature called Ford Transit (showing twice this week at Facets Cinematheque) that freely mixes fiction and nonfiction as if they were alternate routes to the same goal. I also attended the world premiere of a more conventional documentary, The Take, which was made for Canadian TV and may never screen here. Finally, there’s Super Size Me (which opens at the Landmark this week), a film that has been getting considerable attention since it premiered at the Sundance festival last January. 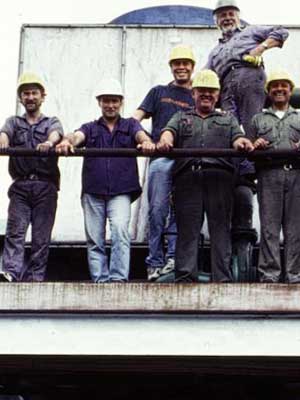 Let’s start with The Take, which was directed by Avi Lewis and written by Naomi Klein, who’s a columnist for the Nation and the Guardian and author of the international best seller No Logo, a journalistic account of the worldwide antiglobalization movement.… Read more »

From Wide Angle, vol. 4, no. 3 (1980).  I hope that Peter Lehman, who wrote the introduction to our interview and whom I haven’t seen in decades, doesn’t mind me posting this piece now.

I retain a very warm memory of Jerry Fielding; we were staying in Athens, Ohio at the same hotel during the Workshop on Sound and Music in the Cinema, which we were both attending, and we had breakfast together once or twice. I recall his conversation as both literate and dynamic, and especially compelling when he spoke about Sam Peckinpah, one of his favorite collaborators. Dan Carlin (1927-2001), whom I got to know less well, is also, alas, no longer alive. -– J.R.

Film Music: An Interview with Jerry Fielding and Dan Carlin

By Peter Lehman and Jonathan Rosenbaum

Jerry Fielding, Dan Carlin and Chris Newman were guests of a Workshop on Sound and Music in the Cinema presented by the Appalachian Regional Media Center in Athens, Ohio, October 5-7, 1979. The well-known Hollywood composer, Jerry Fielding, began studying music in his late teens with Max Atkins. Atkins was the music director and arranger at the Stanley Theater in Pittsburgh, Fielding’s hometown.  Fielding moved to Los Angeles where he worked with some of the most famous big band leaders.… Read more »

J.R. interviewed by James Naremore (from the latter’s AN INVENTION WITHOUT A FUTURE: ESSAYS ON CINEMA)

I’m thrilled that my favorite academic film critic, James Naremore, finally brought out a collection of his critical and theoretical essays, and even more thrilled that its final section, “In Defense of Criticism,” includes an essay on me (along with essays on James Agee, Manny Farber, and Andrew Sarris, and extracts from Jim’s own ten-best columns for Film Quarterly between 2007 and 2010). Naremore’s essay about me ends with an email interview, and Jim has given me permission to reprint that text here. You can order his book, An Invention without a Future: Essays on Cinema — which also contains some wonderful material about Hawks, Hitchcock, Huston, Kubrick, Minnelli, and Welles, as well as about such topics as acting, auteurism, and literary adaptation — on Amazon. — J.R. 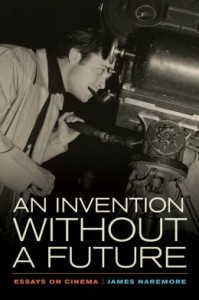 I took advantage of my friendship with Jonathan Rosenbaum to interview him on e-mail about the practical concerns or realpolitik of working as a film reviewer. His replies give us insight into at least one corner of the world of critical journalism:

JN: As a weekly film reviewer for the Chicago Reader, were you given the word length you needed for reviews? Was there any pressure, however subtle, to review big commercial films over art films and revivals?… Read more »