The Great Divide [FROM THE OTHER SIDE]

From the Other Side **** (Masterpiece)

Give me your tired, your poor,

The wretched refuse of your teeming shore.

Send these, the homeless, tempest-tost  to me.

I lift my lamp beside the golden door.

— from “The New Colossus” by Emma Lazarus, quoted on a plaque at the Statue of Liberty

More than 25 years ago, when I was living in a beachside bungalow in a suburb of San Diego, I eventually realized that the bungalow across the alley was a halfway house for Mexicans who’d just made it across the border. I had to figure this out on my own because none of my neighbors ever even alluded to the place or what it was. The constant arrival and departure of new faces was perfectly obvious yet completely unacknowledged—in fact, everything in the surrounding Elysian landscape seemed to encourage one not to observe it. The halfway house was there but not there, like the Mexican ghettos in other parts of suburban San Diego — too decorous to prompt a second look. If people needed to go there in search of cheap labor, they concentrated on what they were looking for. Read more 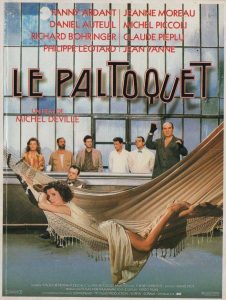 One singular virtue of the French cinema compared to our own is the possibility of low-budget, offbeat projects that well-known actors are willing to participate in. Michel Deville’s very theatrical adaptation and direction of a whodunit novel by Franz-Rudolf Falk isn’t especially compelling as story telling, but it allows one to see eight of the best movie actors in France — Fanny Ardant, Daniel Auteuil, Richard Bohringer, Philippe Leotard, Jeanne Moreau, Michel Piccoli, Claude Pieplu, and Jean Yanne — acquitting themselves honorably; Ardant and Piccoli are particularly delightful. Better yet, it permits the neglected and prolific Deville to forge an interesting stylistic exercise in mise en scene, restricting most of the action to a cavernous bar resembling a warehouse. The dialogue bristles with breezy wordplay that is not easily translated (the title means “the nonentity,” and refers to Piccoli’s ambiguous role as bartender), but Deville’s ingenious use of ‘Scope framing in charting out the space keeps things lively, fluid, and unpredictable (1986). (Facets Multimedia Center’, 1517 W. Fullerton, Friday and Saturday, June 10 and 11, 9:00; Sunday, June 12, 7:30; and Monday through Thursday, June 13 through 16, 9:00; 281-4114)

From the Chicago Reader (September 1, 1987). Twilight Time brought out a lovely Blu-Ray edition of this, and it looks even better to me now than it did in 1987. — J.R. 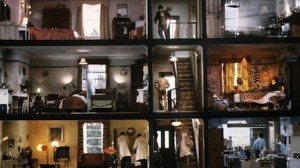 A fascinating attempt by rock video director Julien Temple to do several things at once — adapt a Colin MacInnes novel, show the London youth scene in 1958 (while dealing at length with the racial tensions of the period), build on some of the stylistic innovations of Frank Tashlin, Vincente Minnelli, and Orson Welles, and put to best use a fascinating score by Gil Evans that adapts everything from Charles Mingus to Miles Davis. A mixed success, but an exhilarating try (1986). With David Bowie, Keith Richards, and James Fox. 107 min. (JR)