In late 2002 or early 2003, I was approached by an editor at Oxford University Press about the possibility of editing a new Oxford Companion to Film. Despite some initial reluctance on my part—being rather frightened of the dimensions and demands of such a project—the editor was persistent, and eventually I signed a contract to carry out this work, after drawing up a proposal, enlisting the late Robert Tashman, a Chicago friend (and former Granta editor) to serve as line editor, and compiling several lists of entries (1099 of them covering A through L, as far as I ever got) and contributors (an ideal list of 43).  But the project fell aground after the editor who had enlisted me got downsized. A meeting of Tashman and myself with other Oxford editors in New York made it clear that they weren’t interested in following through on the project, and frankly, I wound up feeling relief about this (although I’m sorry to say that Bob was disappointed—even though both of us were able to keep our advances).

What follows are two sample entries that I wrote for this abortive project; if memory serves, both benefited from Bob’s line-editing. I haven’t updated either of them.… Read more » 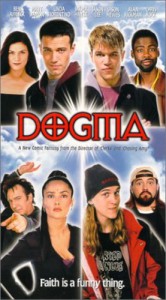 Not to be confused with the Danish publicity stunt Dogma 95, this all-American publicity stunt, a comedy about Catholicism by New Jersey yahoo Kevin Smith (Clerks, Chasing Amy), can be recommended to 11-year-olds of all denominations. Older folks who want to kid themselves that they’re engaging important issues by provoking intolerant believers will undoubtedly get plenty of kicks too. But I couldn’t care less whether Smith’s metaphysical conceits about the war between Good and Evil are those of a devout believer or an atheist. The bottom line is that they’re puerile and that people repeatedly saying things like What the fuck is this shit? doesn’t make Smith either a satirist or a disciple of Preston Sturges. And his clodhopper handling of actors Linda Fiorentino, Alan Rickman, Matt Damon, Ben Affleck, Salma Hayek, and Jason Mewes — only Chris Rock comes out more or less unscathed — makes this 125-minute movie seem interminable. (JR)… Read more »

It’s been about 45 years since I last saw Pietro Germi’s Seduced and Abandoned (1964). I’m sure it already looked like a savage social satire when I was 21 or so, but one additional meaning it’s picked up in the interim is the devastating putdown it offers of The Godfather and its first sequel years before either one was made. (The second-best putdown—Coppola’s own The Godfather: Part III—would come much later.)

If memory serves, Germi’s earlier Divorce, Italian Style (1961) is funnier, largely because it’s less overflowing with bile than Seduced and Abandoned—and also no doubt because it has Mastroianni. But even so, I’m not at all surprised that Manny Farber would describe Divorce as an “unfunny farce”. What probably distinguishes Germi (1914-1974) most sharply from a Farber favorite like Preston Sturges (1898-1959) is the latter’s affection for even his dumbest and crassest characters, little of which Germi appears to permit himself. The hypocrisy of most of the small-town Sicilians in Seduced and Abandoned is too consistent and unvarying to allow for much indulgence, much less love or amusement. Even the title victim, played by Stefania Sandrelli, ultimately becomes a bit dehumanized by all the free-floating scorn, which eventually devolves into a kind of nightmare horror show, almost on the order of something like Rosemary’s Baby.… Read more »