This remarkable and beautiful 160-minute family saga by the great Taiwanese filmmaker Hou Hsiao-hsien (Goodbye South, Goodbye, Flowers of Shanghai) begins in 1945, when Japan ended its 51-year colonial rule in Taiwan, and concludes in 1949, when mainland China became communist and Chiang Kai-shek’s government retreated to Taipei. Perceiving these historical upheavals through the varied lives of a single family, Hou again proves himself a master of long takes and complex framing, with a great talent for passionate (though elliptical and distanced) storytelling. Given the diverse languages and dialects spoken here (including the language of a deaf-mute, rendered in intertitles), this 1989 drama is largely a meditation on communication itself, and appropriately enough it was the first Taiwanese film to use direct sound. It’s also one of the supreme masterworks of the contemporary cinema and, as the first feature of Hou’s magisterial trilogy about Taiwan during the 20th century (followed in 1993 by The Puppetmaster and in 1995 by Good Men, Good Women), an excellent launch to the Film Center’s eight-film Hou retrospective, which runs over the next three weeks. Film Center, Art Institute, Columbus Drive at Jackson, Thursday, June 1, 7:00, 312-443-3737. –Jonathan Rosenbaum 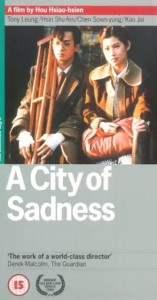 A conversation with film critic Jonathan Rosenbaum by Paolo Ziemba

This being the first article that I’ve written for Cinemad I thought it was more than appropriate to delve into a time where films changed my way of thinking of the world. Rosenbaum was key in this new beginning. Cinemad continues this process. While reading Rosenbaum’s books for research I experienced a sort of nostalgia   for the days back when I was broadening my knowledge of cinema. Rosenbaum had opened many doors to a world of cinema that I had never experienced before. With this in mind I would like this article, at the least, to stir the readers to explore what Rosenbaum, and the world of cinema, is more than willing to offer.