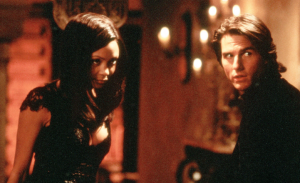 This is obviously a sequel, but whether its true predecessor is Mission: Impossible, Face/Off, or Dr. No is less certain. Like its predecessor, it stars coproducer Tom Cruise, costars Ving Rhames, was written at least partially by prestigious hack Robert Towne (who takes solo credit here), and whimsically glorifies the CIA as a band of efficient sophisticates devoted to inventing new ways for its employees to perform fancy stunts. Like Face/Off, it was directed by John Woo, features a fair amount of sadistic cruelty, and dispenses so many rubber masks to allow the characters to swap identities that no hero or villain winds up carrying any moral weight at all. (How they sometimes manage to imitate one another’s voices is poorly explained, but credibility is so thin throughout that this movie only came into its own when it became available on video and thus truly disposable.) Like Dr. No, it’s a piece of nostalgia for colonialism (the main urban setting is Sydney), Playboy, Cary Grant, high-tech gadgets, and apocalyptic fantasies, and if Cruise makes an unconvincing Bond when compared to Sean Connery, Anthony Hopkins is perfectly cast as Cruise’s chief, and Thandie Newton — as a thief enlisted by the CIA to fuck her former boyfriend, villain Dougray Scott — arguably makes an even better babe than Ursula Andress. Read more