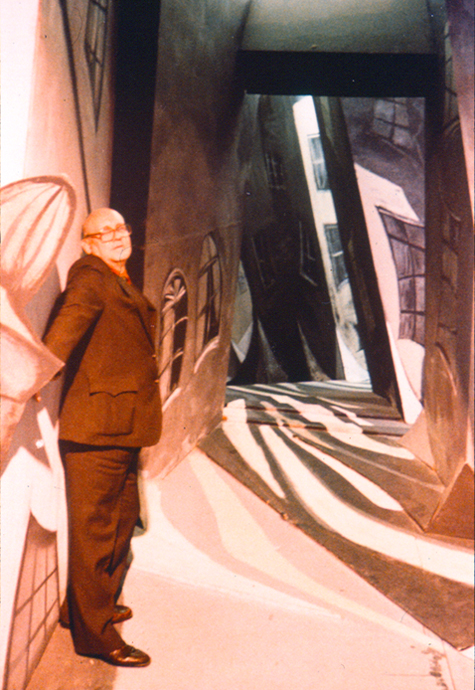 Thanks to a passing reference by Andy Rector on Girish’s excellent blog, I’ve just stumbled upon an invaluable online reference tool — the William K. Everson Collection, which has been set up by New York University’s Cinema Studies, where Everson taught from 1972 to 1996. As someone who used to attend some of the memorable screenings of The Theodore Huff Memorial Film Society that were organized by Everson, at two or three of its separate locations, I’m especially delighted to recover some of the program notes he wrote for those events, such as those for F.W. Murnau’s rediscovered City Girl (a screening I attended) on March 2, 1970. In fact, the two most impressive individual archives to be found at this site are Everson’s voluminous program notes, beautifully cross-referenced and reproduced for easy access, and his collection of press kits. (There are also some other things here as well — including the photograph reproduced above, of Everson imitating Cesare in the Cabinet of Dr. Caligari set that was rebuilt inside the Cinémathèque Française’s Musée du Cinéma at the Palais de Chaillot.)

Everson’s immense value when he was alive was more his extraordinary generosity, the breadth of his knowledge as a film scholar, and his enthusiasm than his critical acumen, so there are times when one wants to quibble with some of the own opinions in his notes (such as his own quibbles about Jacques Tourneur’s masterpiece Stars in My Crown, for example). But one of the most precious things to be found in these notes, some of which I’ve just printed out, are their rare glimpses of alternative filmgoing in Manhattan at various points in the past. When, for instance, he wrote his notes for Marcel L’Herbier’s L’argent (1929), these were for an hour-long (!) condensation of the film blown up to 16-millimeter from 9.5 millimeter that was being screened by the Huff Society on April 21, 1964, at a time when the Paris Cinémathèque apparently still believed that neither a full print nor the film’s negative was still in existence.