If you’re already familiar with the experimental and queer cinema of English artist Derek Jarman (1942-1994), you won’t want to miss this multifaceted tribute by Isaac Julien. Built around a late interview with Jarman, it draws on a personal lecture by his actress and friend Tilda Swinton and many clips, homes movies, and other materials. On the other hand, if you’d like an introduction to his art, your time would be better spent seeing The Last of England, Edward II, or Wittgenstein. This tribute has too many cooks and too many agendas to permit easy comprehension, especially when it comes to distinguishing the brief, unidentified clips from the empathetic curlicues, voiceovers, and
commentaries of others. 76 min. (JR) 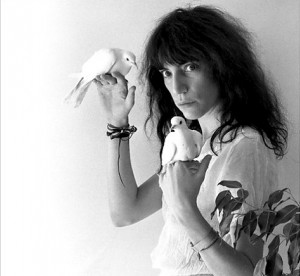 I’d read enough about this documentary, made over 11 years by Steven Sebring, to know not to expect a concert film. What I was less prepared for was the paradoxical view of my favorite punk star that emerges, making her seem like the ultimate postmodernist heroine — the edgy outlaw that, to all appearances, has never been in even modest rebellion against any part of her family, and modulates from angry iconoclast to contented Detroit housewife and back again with scarcely a bump. (At one point she avows that her principal claim to being a taboo-breaker as a child-rearing launderer is that she doesn’t use bleach.) It seems fairly evident that she’s very much in control of her own image here, and that image manages to encompass a sense of a rock star’s glamor while suggesting that she’s never shampooed her hair even once in her life.

Maybe the source of my confusion is her unusual capacity to shift back and forth repeatedly between ultra-theatricality and mundanity, which made the only concert of hers I’ve ever attended, in London in the mid-70s, a little off-putting. One moment she’d be leading the audience like a Dionysian Joan of Arc; the next moment, she’d be sitting on the floor cross-legged, apparently oblivious to the same audience, while playing idly with her guitar as if it were a kitten rather than a musical instrument.… Read more »

Profit Motive and the Whispering Wind

Inspired by Howard Zinn’s A People’s History of the United States, this beautiful documentary by John Gianvito (The Mad Songs of Fernanda Hussein) documents not only graves and memorials across the U.S. for people (both famous and unknown) who died in political struggles, but also the surrounding landscapes that nestle and sometimes hide these largely unremarked sites. The casual way Gianvito introduces us to these settings via sound and image, the varying cinematic means employed (including stretches of animation), and the powerful maximal effects he achieves from his supposedly minimalist agenda are all essential facets of the film’s haunting poetry. This was named best experimental film of 2007 by the National Society of Film Critics, but it also displays a strong passion for history–including film history, from Griffith, Stroheim, and Dovzhenko to Straub-Huillet. 58 min. a Gene Siskel Film Center. —Jonathan Rosenbaum… Read more »