The Legend Of Drunken Master

A fleet, enjoyable Jackie Chan romp, this dubbed and retitled 1994 version of Drunken Master II (a belated sequel to the 1979 Drunken Master, which served to launch Chan’s career) brings back his turn-of-the-century folk hero Wong Fei-hung exercising his virtuoso drunken fist sallies against thugs after a long string of provocations. The climactic choreographic rumble is well worth waiting for. The credited director, Lar Kar-leung, who was responsible for the original, was fired by Chan halfway through the shooting, and this appears to be Chan’s show all the way. 102 min. (JR) Read more

Blame It On Fidel

In early-70s France, a thoughtful nine-year-old (Nina Kervel) undergoes a series of crises when her middle-class French mother and Spanish father become radical leftists, committed to feminist, anti-Franco, and pro-Allende activities. The script was adapted from an Italian novel by Domitilla Calamai, though because director Julie Gavras is the daughter of left-wing filmmaker Costa-Gavras, it’s tempting to speculate on whether this first feature reflects some of her own experiences. Most of the story is told from the girl’s viewpoint; her confusion about the political issues is complicated by her conservative grandparents and anticommunist Cuban nanny (who provides the film’s title). The young heroine is rather humorless, but Gavras’s intelligence and skillful touch are evident throughout. With Stefano Accorsi and Julie Depardieu (Gerard’s daughter). In French with subtitles. 99 min. (JR) Read more

This heart-warmer by Robert Benton has some of the tender wisdom and humor of his other features (e.g., Nobody’s Fool), though Benton’s decision to hang his dramatic payoff on the pronouncements of a fortune-teller suggests a certain stickiness along with the sweetness. Adapted by Allison Burnett from a novel by Charles Baxter, the story considers various couples in Portland, Oregon, but centers on a coffeehouse owner (Greg Kinnear) whose wife (Selma Blair) leaves him for a woman and whose best friend (Morgan Freeman), a happily married professor on indefinite leave, advises him while nursing his own heartbreak. Their torments and triumphs moved me even as I regretted some of the script’s emotional simplifications. With Radha Mitchell, Alexa Davalos, Toby Hemingway, and Fred Ward. R, 102 min. (JR) Read more

Michael Hoffman (Restoration, Soapdish) directs Michele Pfeiffer and George Clooney in a beautifully contrived romantic comedy with a Manhattan setting that is exploited to the utmost. A veritable anthology of the perils of single parentingdemanding jobs, cellular phones, busy schedules, transportation hasslesthis 1996 film works a lot better than most Hollywood fluff because the leads are so good (and so well defined in Terrel Seltzer and Ellen Simon’s deft script), and because Hoffman is a pro at keeping everything in motion. With Mae Whitman, Alex D. Linz, Ellen Greene, and Charles Durning. (JR) Read more

Shadows of Our Forgotten Ancestors

Adapted from a novel by Ukrainian writer M. Kotsyubinsky, Sergei Paradjanov’s extraordinary merging of myth, history, poetry, ethnography, dance, and ritual (1964) remains one of the supreme works of the Soviet sound cinema, and even subsequent Paradjanov features have failed to dim its intoxicating splendors. Set in the harsh and beautiful Carpathian Mountains, the movie tells the story of a doomed love between a couple belonging to feuding families, Ivan and Marichka, and of Ivan’s life and marriage after Marichka’s death. The plot is affecting, but it serves Paradjanov mainly as an armature to support the exhilarating rush of his lyrical camera movements (executed by master cinematographer Yuri Illyenko), his innovative use of nature and interiors, his deft juggling of folklore and fancy in relation to pagan and Christian rituals, and his astonishing handling of color and music. A film worthy of Dovzhenko, whose poetic vision of Ukrainian life is frequently alluded to. In Ukrainian with subtitles. 100 min. a Sat 9/22, 6:15 PM, Sun 9/23, 3 PM, and Thu 9/27, 8:15 PM, Gene Siskel Film Center. –Jonathan Rosenbaum Read more

The least known of Charles Burnett’s first three features (1983)the other two are Killer of Sheep and To Sleep With Angerfocuses on the family pressure exerted on a young man in Watts (Everett Silas), who works at his parents’ dry cleaners, to abandon his disreputable ghetto friends and adjust to a more middle-class existence. This struggle is pushed to the limit when he has to choose between attending his older brother’s wedding to a woman from an affluent family and attending the funeral of his best friend, a former juvenile delinquent. Burnett’s acute handling of actors (most of whom are nonprofessionals) never falters, and his gifts as a storyteller make this a movie that steadily grows in impact and resonance as one watches. (JR) Read more

In a game of spin the bottle, a ten-year-old goth girl puts a hex on the title hero after he refuses to bare his penis. The result: when he grows up to become Dane Cook, each woman he has sex with marries the next guy she meets. Then he falls in love with a penguin specialist (Jessica Alba) andis there any point in continuing? Writer Josh Stolberg and director Mark Helfrich think so little of this premise that they periodically debunk it themselves, leaving me to conclude that for them any excuse for Cook and sidekick Dan Fogler’s vulgar shticksuch as sex with an obese woman who fartswas good enough. Some of the audience seemed to be having fun, but for me it was like a Farrelly brothers gross-out without the laughs. R, 96 min. (JR) Read more

In the Valley of Elah

Paul Haggis follows up his Oscar-winning Crash with this searing drama that uses the police procedural to explore the moral and psychological devastation of the Iraq war for U.S. soldiers (and, incidentally, for Iraqi citizens). Inspired by real events, it focuses on a grief-stricken father (Tommy Lee Jones, at his best) who, assisted by a police detective and single mother (Charlize Theron), tries to solve the murder of his son, who has been dismembered near a New Mexico army base shortly after going AWOL and returning from Iraq. With Josh Brolin and Susan Sarandon. R, 121 min. Webster Place. –Jonathan Rosenbaum Read more

Flying: Confessions of a Free Woman

The best miniseries I’ve seen this year, The Trap: What Happened to Our Dream of Freedom, made by Adam Curtis for the BBC, hasn’t reached U.S. screens yet (although you can find it online). But the second best, a six-part, six-hour essay by Jennifer Fox (Beirut: The Last Home Movie, An American Love Story), has a related theme–how a free and independent filmmaker in her mid-40s can create her own set of traps. Still unmarried and childless by choice, she has lovers on two continents–one of them with a wife and kids–and finds her life turning into a frantic juggling act; meanwhile, she tapes her conversations with women from around the globe about their own ideas of freedom. There are times when Fox’s nervy endeavor to combine art and life obliges one to give way to the other, but her efforts and reflections throughout are riveting. Reviewed this week in Section 1. a Parts 1-2: Fri 9/14, 8:15 PM, and Sat-Sun 9/15-9/16, 3 PM; parts 3-4: Sat 9/15, 5:30 PM, and Tue 9/18, 6 PM; parts 5-6: Sat 9/15, 8:30 PM, and Tue 9/18, 8:30 PM; Gene Siskel Film Center. –Jonathan Rosenbaum Read more 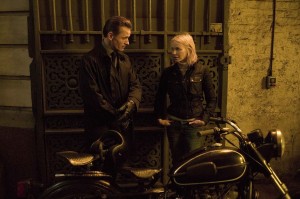 David Cronenberg’s follow-up to A History of Violence — starring the same lead, Viggo Mortensen, in a very different part — lacks the theoretical dimension of its predecessor, but it’s no less masterful in its fluid storytelling and shocking choreography of violence. A Russian mafia tale with a London setting, scripted by Steven Knight (Dirty Pretty Things), it confirms Cronenberg’s position as an old-fashioned, almost Dickensian moralist. He refuses to fetishize corruption the way the Godfather films do, while working wonders with a charismatic villain (Armin Mueller-Stahl in a remarkable performance) and creating a charged homoerotic atmosphere. With Naomi Watts and Vincent Cassel. R, 96 min.  River East 21. –Jonathan Rosenbaum 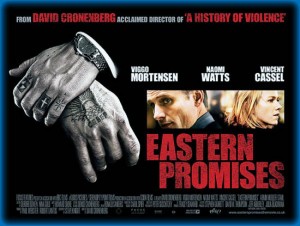 Eytan Fox (Yossi & Jagger, Walk on Water) cowrote and directed this sweet tempered but occasionally simplistic youth picture about three young, progressive Israelis who share a flat in a chic section of Tel Aviv. One of them, a music store clerk and part-time army reservist, falls in love with a Palestinian man he met while serving at a security checkpoint, and the flatmates find their lives complicated when they decide to help the Palestinian remain in the city illegally. In Hebrew and Arabic with subtitles. 117 min. (JR) Read more

This 1927 silent vehicle for Greta Garbo, which costars John Gilbert, doesn’t make too much sense as an adaptation of Anna Karenina, Tolstoy’s great novel about adultery. At least half of the ploteverything involving the character Levinis pared away in Frances Marion and Lorna Moon’s script, and the direction, by Edmund Goulding, is more serviceable than inspired. But Garbo’s radiance is imperishable. 82 min. (JR) Read more

Even if you’re square enough to find celebrations of mass slaughter tacky, it’s hard to deny that Clive Owen drives carrots through his opponents’ skulls with such stylish panache you forget real carrots aren’t lethal. Similarly, the way he casually mows down a mob while spontaneously delivering a baby in the opening sequence makes it seem only reasonable that he’d bully a prostitute (Monica Bellucci) into nursing it while the trio flee from cackling, villainous Paul Giamatti, or that she’d quickly fall in love with her laconic abuser, interrupting her maternal duties only long enough to raise some cash by giving a blow job in an alley. One can certainly be amused and entertained by writer-director Michael Davis’s hyperbolic action frolicsI wasbut not without feeling pretty low and stupid. R, 87 min. (JR) Read more

Bing Crosby stars as a carefree troubadour who settles down and helps to open a restaurant in order to keep his little friend (Edith Fellows) out of an orphanage; Madge Evans (Hallelujah, I’m a Bum!) is the skeptical social worker who gradually falls for him. Directed by Norman Z. McLeod, this Depression-era musical (1936) is hokey but likable, its cloying sentimentality made bearable by its casual but sincere populism. Louis Armstrong, who reunited with Crosby on-screen 20 years later in High Society, is just as wonderful here. 81 min. (JR) Read more

Retrospectives devoted to Alfred Hitchcock (at Block Cinema this fall) and Akira Kurosawa (at Doc Films) are always welcome no matter how often they occur. But Doc Films’ complete screening of the work of Ousmane Sembene is an exceptional gift, considering how difficult it’s been to see most of his nine features and four shorts. The father of African cinema, Sembene, who died in June at the age of 84, had a lengthy and distinguished career as a fiction writer before he made his first short around the age of 40. Hailing from Senegal, he worked as a mechanic and bricklayer and fought with the Free French in Africa and France before participating in a famous railway strike back in Dakar. Moving to France, he worked at a Citro’n factory, then for a decade as a Marseille dockworker, which formed the basis for his first novel, Le Docker Noir, published in 1956. Sembene was a masterful storyteller with a flair for both comedy and drama; he was also a highly political but consistently undogmatic commentator on what it means to be African. He showed a special feeling for his female characters in Black Girl (1966), Faat Kine (2000), and Moolaade (2004), but his blistering treatments of bureaucracy in Mandabi (1968) and foreign aid in Guelwaar (1992) are no less memorable. Read more