The Sea Is Watching

Scripted by Akira Kurosawa four years before his death in 1998, this Edo-period tale (2002) about prostitutes, adapted from Shugoro Yamamoto’s novel The Smell of an Unknown Flower Before the Dew Dries, seems more characteristic of Kenji Mizoguchi. Director Kei Kumai, best known for his socially conscious films, was recommended for this assignment by Kurosawa himself, who admired Kumai’s handling of women characters. Following the master’s own sketches for sets and costumes, Kumai makes this a real eye pleaser, impressive in its use of color and its treatment of weather (including a climactic flood). The banal score seems more appropriate for a western, and there’s a certain self-conscious theatricality in the mise en scene, yet this is both handsome and affecting. In Japanese with subtitles. 119 min. (JR)… Read more »

The Girl From Chicago And Broken Strings

Two race movies made for segregated black audiences. The 69-minute The Girl From Chicago (1932) was written and directed by independent black pioneer Oscar Micheaux, who’d been an able filmmaker in the silent era but became mannerist and slapdash once he turned to talkies, consistently selecting terrible camera angles, extracting stridently false performances from his players, and apparently making up his scripts as he went along (on occasion he can be heard offscreen feeding lines to the actors). The muddled plotabout a Secret Service agent (Carl Mahon) courting a small-town schoolteacher while fighting the numbers racketis made all the more indigestible by a lousy 16-millimeter print. However hokey, Bernard Ray’s Broken Strings (1940, 60 min.), showing in an excellent 35-millimeter print, is comparatively touching and professional. Clarence Muse (frequently a servant in Hollywood pictures) stars as a classical violinist whose hand is paralyzed in an accident. His adolescent son (Walter Washington) saves the day by becoming a star swing violinist. (JR)… Read more »

The saddest thing about Woody Allen’s effort to retool his brand of romantic comedy for the youth market isn’t the absence of laughsit’s the bitterness that cuts through everything, which is hardly sweetened by all the Billie Holiday numbers on the sound track. Jason Biggs is a young writer who falls in love with freewheeling actor-singer Christina Ricci (shades of Annie Hall) and who’s saddled with loser agent Danny DeVito (shades of Broadway Danny Rose). Allen plays Biggs’s sour mentor, who goes walking with him in Central Park (allowing us to get two versions of Woody at once), and Stockard Channing does a turn as Ricci’s mother, who also wants to be a singer. The film’s hatred of Ricci and Channing and its affectionate tolerance of the hero’s mousy hypocrisy and his mentor’s negativity are familiar Allen motifs, but the faint echoes of his best work only make this one seem grimmer. 108 min. (JR)… Read more »

In a gothic city (i.e., Tim Burton’s Gotham City) where vampires and werewolvesmostly Brits and a few Americanshave been at war for centuries and everyone falls to the ground in slow motion, Kate Beckinsale, an action vampire, strenuously underacts while everyone else, vampires and werewolves alike, strenuously overacts. She’s also the only one permitted to make a fashion statementone that mainly says The Matrix rules, though her black rubber suit suggests Batman again. I spent most of the movie’s endless 121 minutes trying to figure out where and how she could buy such a cute outfit in a city where it’s always night, there are no stores or restaurants, and the subway is used chiefly for shoot-outs. This is the silliest horror movie I’ve seen in years, though some of the special effects are pretty good. Len Wiseman directed Danny McBride’s ponderous, humorless script, and Scott Speedman costars. (JR)… Read more »

Things To Do In Denver When You’re Dead

Alas, most of the surprise and the wit to be found here ends with the title. Produced and distributed by Miramax, it’s another quirky thriller like The Usual Suspects (albeit slightly better) that got green lighted because of Tarantino’s successan exercise without much point or originality except stylishness (not to be confused with style). A retired criminal (Andy Garcia) is recruited by his former boss (Christopher Walken) to frighten the new boyfriend of his son’s ex-girlfriend, a plan that goes awry when a borderline nut case (Treat Williams) in Garcia’s team of hoods gets carried away. Directed by first-timer Gary Fleder from a screenplay by Scott Rosenberg; the remainder of the predictable if serviceable cast includes Christopher Lloyd, William Forsythe, Bill Nunn, Jack Warden, Gabrielle Anwar, Fairuza Balk, and, yep, Steve Buscemi. (JR)… Read more »

Once Upon A Time In Mexico

Following a suggestion from Quentin Tarantino, Robert Rodriguez turned this third El mariachi installment into an homage to Sergio Leone. The result is a dull and campy 97-minute bloodbath offering little distinction between good guys and bad, on the basis either of character (Willem Dafoe’s cartel boss, Johnny Depp’s CIA agent) or of screen persona (Cheech Marin, Mickey Rourke, Ruben Blades). The only exception is the guitar-slinging hero (Antonio Banderas), more icon than character as he avenges the murder of his wife (Salma Hayek). Rodriguez shot this in seven weeks with a newly developed DV camera, which might be impressive if the results meant anything. But the editing is strictly MTV and the storytelling so confusing that I kept longing for the focused austerity of his 1993 El mariachi debut. (JR)… Read more » 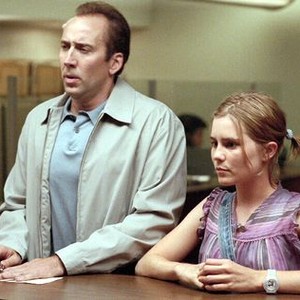 Nicolas Cage, director Ridley Scott, and writers Nicholas and Ted Griffin (adapting an Eric Garcia novel) do an interesting job of capturing the fractured and tortured consciousness of a small-time Los Angeles con artist riddled with compulsive disorders whose life achieves some focus when he encounters a teenage daughter (Alison Lohman) he never knew he had. (He also has a partner and a shrink, played respectively by Sam Rockwell and Bruce Altman.) The portraiture is so carefully done that I regret in some ways the tricky plot — which is also carefully done, but seems at times to belong to a different movie. Robert Zemeckis served as executive producer. 120 min. (JR) 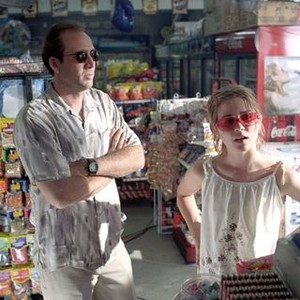 This 2001 American-German documentary by Angela Christlieb and Stephen Kijak isn’t very popular among normal cinephiles (if such a term isn’t already an oxymoron) because it exhibits five of the most extreme and dysfunctional cinemaniacs in Manhattan, figures already somewhat legendary among patrons of the Walter Reade Theater, the Museum of Modern Art, Film Forum, and similar venues. Roberta Hill, a pack rat who saves ticket stubs and flyers, was banned from one of her haunts after assaulting an usher who tore her ticket in half, while Harvey Schwartz, who lives with his mother in the Bronx, memorizes the precise running times of everything he sees. The filmmakers aren’t exactly cruel, but they focus on compulsion rather than passion, which by implication tends to tarnish the more intellectual and scholarly members of the breed. 80 min. (JR)… Read more »

Eleven short films from around the world, responding in very different ways to the terrorist attacks of September 11, 2001; the only ground rule is the length, stipulated as 11 minutes, 9 seconds, and one frame. The best films (by Iran’s Samira Makhmalbaf, the UK’s Ken Loach, Burkina Faso’s Idrissa Ouedraogo, and Japan’s Shohei Imamura) are likely to broaden many Americans’ perception of the attacks, while the most confused (by Egypt’s Youssef Chahine, France’s Claude Lelouch, and our own Sean Penn) still have the merit of showing fresh points of view. The others are by Israel’s Amos Gitai, Mexico’s Alejandro Gonzalez I… Read more »

I came, I saw, I sufferedthough so far I’ve been spared the 1998 documentary of the same title by the same filmmakers, Fenton Baily and Randy Barbato, as well as James St. James’s 1999 nonfiction book Disco Bloodbath: A Fabulous but True Tale of Murder in Clubland. This docudrama about flamboyant, drugged-out New York queens dissing one another focuses on the rise of Michael Alig (Macaulay Culkin) from protege of St. James (Seth Green, who sometimes seems to be lampooning Gary Indiana) to king of the clubbers, not to mention casual killer of a member of that bunch (Wilson Cruz). If this were witty, it might have qualified as a downtown version of All About Eve; if it were believable, I wouldn’t have come away feeling that the actors (including Dylan McDermott and Chloe Sevigny) were wasted. I’m so out of here, one character remarks when he can’t take any more. My sentiments exactly. 98 min. (JR)… Read more »