Emilio Fernandez’s 1947 feature, shot by the great Gabriel Figueroa, stars Maria Felix as a highly respected schoolteacher who comes up against a renegade land baron in a small town, a villain who employs rape as a key weapon against her. With Domingo Soler. 100 min. (JR) Read more

One Day In The Life Of Andrei Arsenevich

As the title’s reference to Solzhenitsyn implies, this superb 1999 video portrait of the late Russian filmmaker Andrei Tarkovsky by his friend Chris Marker is a protest against the post-Stalinist persecution that eventually drove Tarkovsky into exile. But above all this is a work of film criticism and the best one dealing with Tarkovsky that I know, full of clarifying insights. Marker sees Tarkovsky’s seven features and his staging of the opera Boris Godunov as a kind of continuum that also echoes his lifea dangerous way to interpret the work of a complex artist, yet Marker justifies it through his obvious close acquaintance with the man and his films. In some ways a companion piece to The Last Bolshevik, Marker’s earlier video about Russian filmmaker Alexander Medvedkin, this is more metaphysical in nature, in keeping with its subject. Essential viewing. In French with subtitles. 55 min. (JR) Read more

Shot on video, this 1998 effort by Lars von Trier is the only one of his features made according to his headline-grabbing and somewhat specious Dogma 95 manifesto. When I saw it in 1998, shortly after its Cannes premiere, it seemed like one of those independent countercultural films made in the U.S. and western Europe in the late 60s and early 70s but with all the leftist politics removedthe implication being that people rebel against society only because they have unhappy family backgrounds. The rebels in this movie are members of a sexually freewheeling commune who like to behave like mentally challenged children in public. Aside from one excellent scene, in which a father turns up at a commune to reclaim his daughter, this is thoughtful nihilist provocation at best (knowing von Trier’s work, however, I’m more inclined to take it at its worstas a cynical and sentimental con). Showing here belatedly, the film has been censored in the Japanese manner, with black bars obstructing the characters’ genitalia (though apparently the process was carried out in the U.S.). In Danish with subtitles. 117 min. (JR) Read more

It isn’t surprising that John C. Richards and James Flamberg won the prize for best screenplay at the 2000 Cannes film festival; this offbeat and unpredictable comedy-thriller throws so many curveballs, one right after another, that I doubt I had more fun at an American movie released that year. You should know as little in advance about the plot as possible, so let’s just say that the title heroine (Renee Zellweger), a poorly treated housewife in a small town in Kansas who’s addicted to a daytime soap and smitten with one of its main characters (Greg Kinnear), drives out west to find him, with a couple of bickering hit men on her tail. The latter are played by Morgan Freeman and Chris Rockwho may be the most exciting tragicomic duo to come along since Martin and Lewis. There’s a lot going on in this movie about fantasy fulfillment and folie a deux in general, and one of the most remarkable things about it is that it was directed by Neil LaBute, the writer-director of the highly misanthropic In the Company of Men and Your Friends & Neighbors; this starts out with a similarly nasty edge and then turns warmer, funnier, and perhaps even wiser by the minute. Read more

The cast is encouraged to overact and the script doesn’t try for much subtlety either, but at least there’s a certain amount of sincerity here. In the title Texas backwater, four graduating seniors out of a class of five (the other’s a girl) have vowed to move to Los Angeles together and seek their fortunes, but as the time to leave approaches they all encounter either doubts or interference. Writer-director Tim McCanlies only occasionally makes up in earnestness for what he lacks in originality, but the cast of unknownsincluding Breckin Meyer, Peter Facinelli, Ethan Embry, and Eddie Mills as the four boyssometimes gives it the welcome flavor of a small-town theater production. (JR) Read more

The Oyster And The Wind

The daughter of a lighthouse keeper on a remote island dreams up an imaginary male companion in this 1997 Brazilian feature by Walter Lima Jr. It’s supposed to register like a fairy taleyet in fact it’s fairly dull. The movie tries for the magic of a Raul Ruiz fantasy and doesn’t make itbut the colors are pretty. (JR) Read more

Six-inch twin princesses who sing and talk in unison are kidnapped from an island by an evil showman, only to be pursued all the way to Tokyo by a giant caterpillar that smashes buildings, spins a cocoon, and becomes a moth. Ishiro Honda whipped this up in 1961; originally it went under the name Mosura. 100 min. (JR) Read more

This exciting existentialist road movie by Monte Hellman, with a swell script by Rudolph Wurlitzer and Will Corry and my favorite Warren Oates performance, looks even better now than it did in 1971, although it was pretty interesting back then as well. James Taylor and Dennis Wilson are the drivers of a supercharged ’55 Chevy, and Oates is the owner of a new GTO (these nameless characters are in fact identified only by the cars they drive); they meet and agree to race from New Mexico to the east coast, though an assortment of side interests periodically distracts them, including various hitchhikers (among them Laurie Bird). (GTO hilariously assumes a new persona every time he picks up a new passenger, rather like the amorphous narrator in Wurlitzer’s novel Nog.) The movie starts off as a narrative but gradually grows into something much more abstractit’s unsettling but also beautiful. 101 min. (JR) Read more

Made in 1960, on the heels of Breathless, Jean-Luc Godard’s second feature (and his first starring Anna Karina) is more typical of the intellectual rumination that would characterize his later work. Michel Subor plays a secret agent in Geneva who winds up being tortured by Algeria’s FLNarguably more as a kind of macho testing, like the protracted beating of the hero in The Glass Key, than as a consequence of Sartrean position taking. For years Le petit soldat was banned in France for its treatment of torture and terrorism in the Algerian war; in fact Godard was closer to the right when he made it, but like his protagonist he was full of doubts. Subor’s contemplative voice-over and Raoul Coutard’s somber cinematography make this seem severe compared to the jazzy exuberance of Breathless. 88 min. (JR) Read more 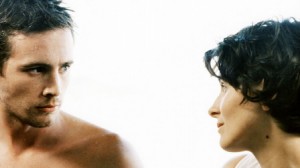 As demonstrated by My Favorite Season, Wild Reeds, and above all Thieves, Andre Techine has become the most accomplished novelistic filmmaker in contemporary French cinema. This feature may not be on the same level as those films, but it has much the same tragic and melodramatic view of family, desire, and destiny. The talented (and Oscar-winning) Juliette Binoche plays a violinist who lives with a gay actor in Paris (Mathieu Amalric) and becomes romantically involved with his illegitimate half brother (Alexis Loret), a professional model, after he moves into their flat. Loret’s relative lack of acting experience is the film’s biggest flaw, but it doesn’t pose any fatal problems: the sheer neurotic intensity of Techine’s main characters, which stretches both backward and forward in time, as in a Faulkner novel, holds one throughout, as do Techine’s masterful direction and many of the other performances (including Carmen Maura as Loret’s mother). 123 min. Music Box, Friday through Thursday, September 1 through 7. –Jonathan Rosenbaum Read more