Another neo-noir about the intersection of various scams in a small American town. This one stars Alessandro Nivola, Reese Witherspoon, and Josh Brolin, and it’s directed by England’s Mike Barker from a script by Ted Griffin. The movie makes a great show of parsing moral issues, but it’s clear from the outset that the stylish interiors and the fancy colors in Ben Seresin’s cinematography are what really count, along with a couple of predictably unpredictable twists. It’s vacuous but diverting in a seedy sort of way. (JR)… Read more »

All The Little Animals

The impressive directorial debut of Jeremy Thomasproducer of major films by Bernardo Bertolucci, David Cronenberg, Nagisa Oshima, and Nicolas Roeg, among othersis a compelling throwback to the emotional purity and directness of 19th-century melodrama and its various offshoots; though it isn’t as good as D.W. Griffith’s Broken Blossoms or Charles Laughton’s The Night of the Hunter, these are the sort of pictures it calls to mind. The somewhat Dickensian plot, adapted by Eski Thomas (the producer-director’s wife) from a novel by the late Walker Hamilton, involves an intellectually challenged animal lover (Christian Bale) who flees from his evil stepfather (Daniel Benzali) in London after his mother’s death and an eccentric former bank clerk (John Hurt) he links up with on the road who devotes his life to burying animals killed by motorists. The unabashed depiction of characters so purely good or evil that their behavior virtually defies motivation demands a certain innocence from the viewer that is rarely solicited nowadays, but the film fully rewards it: Thomas has a wonderful feeling for landscape and a keen sense of storytelling that falters (and not by much) only when he overextends the plot’s suspenseful finale. This isn’t for everyone, but can be emphatically recommended to anyone suffering from a surfeit of cynicism at the movies.… Read more »

A watershed in the history of Chinese cinema, this first feature (1998) directed by Lu Yue — the remarkable cinematographer of Xiu Xiu: The Sent Down Girl and several recent features of Zhang Yimou, including Shanghai Triad — is an eye-opening comedy about adultery in contemporary Shanghai. Much of the dialogue is improvised by the talented actors — Shi Jingming as the husband, a professor of traditional Chinese medicine; Zhang Zhihua as his factory-worker wife; and Chen Yinan as his mistress and former student — and both the shooting style and the emotional directness of the performances suggest the filmmaking of John Cassavetes. Though this is unquestionably one of the key films of the 90s from mainland China, it unaccountably disappeared from sight after winning the Golden Leopard at the Locarno film festival in 1998, and as far as I know this [in August 1999] is its first commercial run. Viewers requiring the validation of the New York Times or the New Yorker before making their cultural decisions will therefore have to take a pass on this, and it will be their tough luck. (JR)… Read more »

A military secret weapon that can obliterate everything in its path is intercepted by a couple of working-class stiffs (Skeet Ulrich and Cuba Gooding Jr.) in Montana and pursued by a disgruntled and scapegoated major (Peter Firth) who wants to make a zillion dollars by holding the world at ransom. This action-adventure movie shows the usual contempt for life, humanity, art, the audience, intelligence, characterization, and plot, and the usual affection for stunts, minor star turns, and cliches. The stunt work is pretty good, the brain work close to nonexistent. Directed by Hugh Johnson from a script by Drew Gitlin and Mike Cheda; with David Paymer and Kevin J. O’Connor. (JR)… Read more »

Like all of Albert Brooks’s features, this satire of Hollywood’s insularity is funny, with adroit comic performances from Sharon Stone and Jeff Bridges. But it’s difficult not to see it as a coarsening of Brooks’s rare conceptual talent as a chronicler of American mores. As always, his directing is impeccable, and his whiny performance is pretty much what you’d expect, but his script is fairly lazy by his usual standards. The plot concerns a Hollywood screenwriter (Brooks) who hires a muse with expensive tastes (Stone) to get him out of a career crisis, but the main source of humor is basically Hollywood myopia and all it entails. Andie MacDowell plays the hero’s wife, Bridges plays a fellow screenwriter, and there are a good many cameos by Hollywood notables to fill in the cracks. Monica Johnson, Brooks’s usual cowriter, helped with the script. (JR)… Read more »

Claude Chabrol, Or The Entomologist

I haven’t seen Andre Labarthe’s 1991 documentary about the French director and former film critic. But it’s part of the superb French TV series Filmmakers of Our Times, which has been around since the 60s, consisting of the best documentaries about filmmakers that I know, all in the form of interviews. Labarthe, who’s in charge of the series, used to be a critic for Cahiers du Cinema along with Chabrol, so this is bound to be interesting. (JR)… Read more »

Written by Steve Martin, who stars with Eddie Murphy, this low comedy about low-rent Hollywood filmmaking is funnier than it is logical or satirically consistent. Martin plays a contemporary version of Ed Wood who’s so desperate to shoot his underfunded SF epic that he winds up following an already paranoid action star (Eddie Murphy) around town with hidden cameras, filming him without his knowledge or permission. Most of the satire concerns the star’s religious cult, with Terence Stamp as the guru. This is enjoyable but thin, which is no doubt what was intended; with Heather Graham and Christine Baranski. (JR)… Read more »

Ideologically this lurid tale of two American teenage girls (Claire Danes and Kate Beckinsale) who wind up in a Thai prison on a manufactured drug charge is every bit as xenophobic as Midnight Express, though it’s not nearly as compelling (the storytelling is sluggish) nor as pornographic. Just about every Thai is depicted as evilthe exception is the wife of an expatriate American lawyer played by Bill Pullmanwhich is pretty disgusting but typical of how American movies deal with this corner of the globe. The revisionist approach to this sort of material proposed by the excellent 1998 Return to Paradise, about the imprisonment of Americans on drug charges in Malaysia, is nowhere in sight. Director Jonathan Kaplan clearly has a feel for the material, but he’s at the mercy of a pedestrian script by David Arata and producer Adam Fields. (JR)… Read more »

At once complex and gentle, this 1998 feature concludes Eric Rohmer’s Tales of the Four Seasons series and is one of the best films of his career. It’s about the perils and rewards of rediscovering love in middle age, though, characteristic of Rohmer, it has important young characters as well. Beautifully capturing the southern Rhone valley, it focuses on lifelong best friends — a bookseller (Marie Riviere) and a wine grower (Beatrice Romand) — and the efforts of the bookseller and a young friend of the wine grower (Alexia Portal) to find their friend a lover. Riviere and Romand are both seasoned Rohmer actors, and even played together once before in Summer (1986); the charisma generated by them and Alain Libolt — one of the prospective boyfriends, who looks like Charles Boyer — is central to the film’s success, along with the casual precision and growing momentum of Rohmer’s script and direction. In French with subtitles. 112 min. (JR) 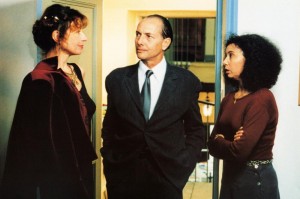 Pretty Woman proved that the Disney peopleor Julia Roberts’s smilecould sell just about anything, including a misogynistic celebration of big business and prostitution. This romantic comedy from Paramount (1999, 116 min.), which reunites Roberts and Richard Gere with director Garry Marshall, presumes we’re so ready to love them all over again that we’ll accept the characters’ sudden shift from loathing to doting when Marshall says abracadabra. But I wonder. Gere plays a male-chauvinist New York newspaper columnist who ridicules Roberts’s character for her habit of backing out of weddings at the last minute; when he’s fired for flubbing some facts he hunts her down in rural Maryland to write one more story. And guess what? Maybe writers Josann McGibbon and Sara Parriott were thinking of Tracy and Hepburnassuming they were thinking of anythingbut not even Roberts’s smile can put this one over. With Hector Elizondo, Joan Cusack, Rita Wilson, and Paul Dooley. (JR)… Read more »

Treating Frisch’s 1974 novel Montauk as if it were autobiographical, Swiss filmmaker Richard Dindo rewrites it through images of the New York locations where the action took place and quotes from several of Frisch’s published works, exploring the creative process.… Read more »