In theory this well-shot, low-budget, black-and-white pseudodocumentary and satiric dark comedy (1992), codirected by and starring Remy Belvaux, Andre Bonzel, and Benoit Poelvoorde, should have been scathing. (The original French title literally means It Happened Close to Where You Live.) A documentary crew headed by director Belvaux and cameraman Bonzel film the exploits of a small-town serial killer and tiresome autodidact (Poelvoorde) who carefully explains his techniques and airs his opinions about life and art; gradually the crew become more and more implicated in the killer’s crimes, which include rape and theft as well as murder. The media’s heroizing of serial killers is certainly ripe for unpacking, but this bold yet rather self-satisfied treatment of the theme often seems nearly as heartless and exploitive as what it’s attacking. What emerges is fairly original in look and feel, but not terribly convincing. In French with subtitles. NC-17, 95 min. (JR)… Read more »

Juno And The Paycock

Though praised when it came out (1930), Alfred Hitchcock’s film of Sean O’Casey’s play, with some of the original Dublin cast (including Sara Allgood as Juno), is a fairly deadly case of canned theater that’s pretty close to what Hitchcock many years later would refer to as photographs of people talking. (JR)… Read more » 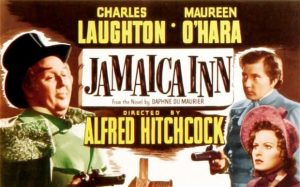 By common consent, one of Alfred Hitchcock’s poorest and least personal works (1939), though it has some compensations. The last film he made in Britain before moving to the U.S., it’s adapted — like Rebecca, his first American picture — from a Daphne du Maurier novel, about an 18th-century nobleman in Cornwall who doubles as the head of a band of smugglers. If this quirky pasteboard effort belongs to anyone, it’s Charles Laughton, who plays the lead with some wit and energy and also served as coproducer. Sidney Gilliat, Joan Harrison, and J.B. Priestley all worked on the script, and Maureen O’Hara, Leslie Banks, and Robert Newton costar. 98 min. (JR)

Identification Of A Woman

This entertaining first fiction feature of Julia Reichert (Union Maids) is at least 25 times better than Paul Mazursky’s The Pickle at making a filmmaker’s creative/midlife crisis meaningful, engaging, and interesting. The filmmaker is a married woman (Kathryn Walker) in Dayton, Ohio, who’s bogged down in finishing a documentary about the 60s counterculture. She becomes involved with a bitter, disaffected cable-access video artist (Jason Duchin) in his 20s, which creates an ongoing dialogue between 60s and contemporary approaches to political protestparticularly when both join an anticensorship protest involving a gay activist with AIDS. The story is set in spring 1989, during the Tiananmen Square protests, and all the characters are fresh and unpredictable. The film-within-a-film features interviews about the 60s with Angela Davis, Tom Hayden, David Horowitz, Greil Marcus, and Holly Near. Mark Blum is effective as the filmmaker’s neglected husband; Steven Bognar and Martin M. Goldstein collaborated with Reichert on the lively script. (JR)… Read more »

Some Hitchcock esoterica from 1930, shot at the studios of British International Pictures at Elstreean all-star vaudeville and revue entertainment apparently intended as an English equivalent of early sound show-biz anthologies such as The King of Jazz and The Hollywood Revue of 1929. Hitchcock is credited with directing the sketches and other interpolated items. Tommy Handley serves as host to about a dozen performers borrowed from current West End musicals, including xylophonist Teddy Brown and his orchestra, the Three Eddies tap-dancing in blackface, Helen Burnell and the Adelphi Girls, and comic and singer Will Fyffe. Donald Calthorp and Anna May Wong contribute a comedy skit about The Taming of the Shrew. (JR)… Read more »

Confessions Of A Suburban Girl

The first documentary of Susan Seidelman (Desperately Seeking Susan), made with British money in 1992, is a predictable 50-minute account of her return at age 40 to Huntingdon Valley, a Philadelphia suburb, to look up her old girlfriends and reminisce about what it was like to be a well-to-do Jewish female teenager. It’s backed up by the usual postmodernist trimmingsmainly corny found footage from the 60s and home movies, though also some clips from Seidelman’s underrated She-Devil. None of the analysis, if you want to call it that, digs very deep; in place of it we get an assumption of entitlement that seems to go with the environment. (JR)… Read more »

It’s hard to think of a movie my feelings have been more divided on. An action adventure directed by ace craftsman Renny Harlin, in spectacular mountain settings (supposedly the Rockies, though most of the picture was filmed in Italy), this is often breathtaking and beautifully put together; the action never flags, and despite the presence of Sylvester Stallone (who wrote the silly boy’s fantasy of a script with Michael France), sheepdog expressions and all, the movie comes across as if somebody half-believed in it. On the other hand, the brutality and sadism it delivers at every opportunity, which we’re supposed to take for granted as part of the fun, left me feeling that any civilization that can create such an entertainment may not deserve to survive; except for our recent turkey shoots in Panama and the Persian Gulf, savagery has seldom been celebrated as shamelessly or as disgustingly. Maybe the way those scenic mountain vistas recall the pre-Nazi star vehicles of Leni Riefenstahl isn’t just coincidence: the movie seeks to make proto-Nazi thugs out of all of us. With John Lithgow, Michael Rooker, Janine Turner, Rex Linn, Caroline Goodall, Paul Winfield, and Ralph Waite. (JR)… Read more »

Alfred Hitchcock’s 1929 masterpiece, his last silent, follows the plight of a murderer caught between her blackmailer and her detective boyfriend. For all the experimental interest of the sound version that followed (the first full-length talkie released in England), this is more fluid and accomplished. Apart from two suspenseful set piecesan attempted date rape in an artist’s studio that ends with the murder of the artist-rapist, and a chase through the British Museum, Hitchcock’s first giddy desecration of a national monumentwhat most impresses is the masterful movement back and forth between subjective and objective modes of storytelling, as well as the pungent uses of diverse London settings. As someone who’s always preferred Lang’s treatment of serial killers to Hitchcock’s, I would opt for this thriller over the much better known The Lodger as Hitchcock’s best silent picture, rivaled only by his less characteristic but formally inventive The Ring. 96 min. (JR)… Read more »