From the Chicago Reader (December 8, 1989). Reseeing this about a quarter of a century later, on an Olive Films Blu-Ray, I was struck by how much it qualifies as Tashlinesque — stylistically if not thematically, insofar as you can’t find real villains (or very much malice) in Frank Tashlin’s movies, whereas the villains here, even if they’re ultimately redeemed, satisfy every possible requirement in a feminist and working-class revenge fantasy. Otherwise, the cartoon characters, the loud and vulgar colors, and the overall cheerfulness are very Tashlin-like. [P.S. You can animate the second still here by hitting it with your cursor.]  —  J.R. 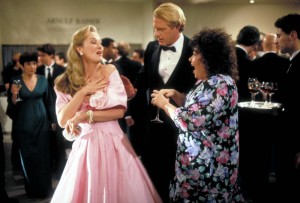 Susan Seidelman’s funniest film since Desperately Seeking Susan is a feminist revenge comedy, adapted from Fay Weldon’s novel The Life and Loves of a She-Devil by Barry Strugatz and Mark R. Burns, and delivered as a broad farce starring Roseanne Barr as an abused housewife and Meryl Streep as the wealthy and famous romantic novelist her husband (Ed Begley Jr.) leaves her for. Considering the potential bitterness of the story line, the movie is surprisingly upbeat, high-spirited, and even inspirational, with lots to say about the empowerment of exploited women and the neglect of old people in this culture without ever being unduly preachy about it. Read more

Christopher Guest’s hilariously accurate and canny satire about contemporary filmmaking in Hollywood was one of David Puttnam’s last projects at Columbia, made with the support of Steve Martin’s production company. Needless to say, it’s getting dumped rather quickly, so this will probably be the last week you’ll be able to see it. If you want to have a better idea of how dopey decisions get made in the film industry, you should rush off to it without delay. Admittedly, the movie turns mushy and conventional whenever it tries to become serious (which fortunately isn’t too often), and ends with a querulous cop-out, but otherwise it’s pretty clear sailing, and few movies this year have made me laugh quite as much. A prizewinning graduate (Kevin Bacon) of the National Film Institute (read: American Film Institute) gets courted by the studios, and winds up getting a chance to direct a big Hollywood movie, but the bright ideas of the studio head (J.T. Walsh)–whose office, incidentally, is said to be modeled directly after Spielberg’s–quickly make hash of his script, and other complications, personal as well as professional, follow. Director Guest collaborated on the screenplay with Michael Varhol and Michael McKean; Emily Longstreth, Jennifer Jason Leigh, Martin Short (at his absolute best as the hero’s agent), and McKean costar, and Roddy McDowall and Elliott Gould, among others, offer cameos. Read more

It’s not normally our practice to feature screenings scheduled in advance of our Friday cover date, but William Klein’s Mr. Freedom rates an exception for the sake of those readers who pick up their papers on Thursday afternoon. An over-the-top fantasy-satire made in 1968, it’s conceivably the most anti-American movie ever made, though there’s no doubt that only an American (albeit an expatriate living in France) could have made it. Despite Klein’s well-deserved international reputation as a still photographer, his films are almost completely unknown in the U.S., so his spirited and hilarious second feature which inaugurates a small retrospective of his works at the Film Center–offers an ideal introduction to his volatile talent. Filmed in slam-bang comic book style, Mr. Freedom describes the exploits and adventures of a heroic, myopic, and knuckleheaded free world agent (Playtime’s John Abbey) who arrives in Paris to do battle against the Russian and Chinese communists, embodied by Moujik Man (a colossal cossack padded out with foam rubber) and the inflatable Red China Man (a dragon who fills an entire metro station). Donald Pleasence is the hero’s sinister LBJ-like boss, and Delphine Seyrig at her giddiest plays the sexy, duplicitous double agent who shows him the ropes and then some. Read more