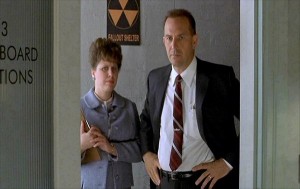 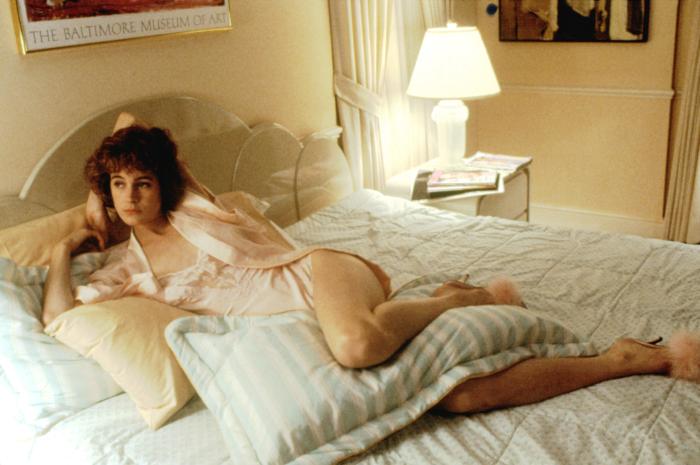 A mild, romantic comedy-thriller, set in Austin, Texas, in 1954. If only the actors — Kim Basinger, Jeff Bridges, Rip Torn, and Gwen Verdon — had more to sink their teeth into, they could have had a field day; but writer-director Robert Benton gives them so little nourishment or stimulus that even a pro like Bridges seems somewhat bemused by the lack of material, while Rip Torn looks so bored with his own cardboard villain that he might as well be phoning in the part. Neither the setting nor the period is made distinctive, and apart from a few minor Hitchcockian jolts, the overall strategy seems to be banking everything on the behavioral cuteness of the two leads, who do the best they can with their condescendingly sketched-in southern working-class characters. Not even cinematography by Nestor Almendros can juice up the proceedings; the movie chugs along, but barely. Although Benton went to school in nearby Austin in the 50s, he seems to remember the movies he saw there better than the region, which is scaled down to sitcom proportions. (JR)

Masochistic, sub-Le Carre stuff about the dirtiness of spying, adapted by Julian Bond from a novel by John Hale. The performances are solid and subtle, with Michael Caine especially effective, but more valuable are the film’s insights into 80s English conservatism. With foreign news coverage in this country dwindling, even this stodgy 1986 thriller can tell us something about how the English middle class thinks. Simon Langton directed; with James Fox, Nigel Havers, Felicity Dean, and John Gielgud. (JR)… Read more »

While lack of feeling is ascribed more often to Stanley Kubrick, Brian De Palma qualifies more as a detached formalist. Here the relative absence of directorial emotion works hand in glove with the slickness and cynicism (as well as craft) of this big-scale 1987 adaptation by David Mamet of the 60s TV series, shellacked with a grandiloquent Ennio Morricone score. The results are watchable enough, with a particularly adept use of Sean Connery, Chicago locations, and period details. But De Palma’s vulgar habit of copying and thereby reducing sequences from better directors is even more offensive when he turns to Eisenstein instead of the usual Hitchcock; his Odessa Steps hommage to Potemkin is the worst kind of kitschy student exercise. There’s much more of Kevin Costner (as Eliot Ness) here than there is of Robert De Niro (as Al Capone), though Costner is quite effective in setting the Reaganite law-and-order tone. Still, it’s a pity to have Charles Martin Smith eliminated so early in the proceedings. 119 min. (JR)… Read more »

Mamie Van Doren stars with (get this) Mel Torme, Paul Anka, Ray Anthony, Gigi Perreau, Gloria Talbott, Jim Mitchum, Sheilah Graham, the Platters, and Harold Lloyd Jr., playing a bad girl who gets sent to reform school, where Maggie Hayes sets her straight. Charles Haas directed this 1959 film (also known as The Innocent and the Damned), and it’s every bit as junky and tawdry as one might hope. 92 min. (JR)… Read more »

Passionately lusting after her missing brother, the eponymous heroine (Tiziana Jelmini), a lonely provincial pharmacist, turns herself into a seductress at night, and, to deal with her frustration and amuse herself, perfects a poisioning technique which allows her to polish off an inordinate number of hapless men. Made in 16-millimeter as a graduation thesis at the Berlin Film Academy by Tania Sticklin and Cyrille Rey-Coquais, this somewhat stylish and dutifully perverse black comedy, a Swiss/West German coproduction, is fairly watchable, but really nothing specialthe sort of nihilistic exercice de style that invariably turns up as festival fodder because of its relative familiarity. You might have a little fun with it, but you can just as easily live without it. (JR)… Read more »

An independent feature from Florida, adapted from a story by Marjorie Kinnan Rawlings, Victor Nunez’s film moves slowly, but with such a precise sense of period (prohibition) and place (the backwoods of central Florida) that it acquires a solid, sensual mass as it develops, aided and abetted by Nunez’s pleasurable camera work. A well-to-do widow (Dana Preu) marries and gets exploited by a slick, younger moonshiner (David Peck) who eventually brings home a teenage mistress (J. Smith, the title waif) until poetic comeuppance finally gets delivered. Preu and a wonderful ginger cat, both inspired nonprofessionals, jointly walk away with the movie (1979). (JR)… Read more »

Set mainly in and around an establishment called the Blue Water Grill in Texas, this is a small film, but within its own terms a delightful and virtually perfect one. The charactersthe dreamy grill owner (Gene Hackman), who compulsively watches home movies of his long-vanished wife; his grumpy yet serene father-in-law (Burgess Meredith); a slightly retarded handyman (Elias Kotias); and a bus driver (Teri Garr) who has her sights set on the grill ownerall seem to come out of Erskine Caldwell and Tennessee Williams, but Bill Bozzone’s capable script, Peter Masterson’s deft direction, and Fred Murphy’s handsome photography all show them off to best advantage, and the movie’s playlike story moves effortlessly. Funny and appealing, this is the kind of quiet and assured Hollywood movie that used to be more common in the 50s; the local flavor is caught perfectly, and every member of the cast shines. (JR)… Read more »

Richard Cheech Marin has expanded his video spoof of Bruce Springsteen’s anthem of the 80s, Born in the U.S.A., into a throwaway comedy that really delivers. Written, directed by, and starring Cheech himself and cheerfully indifferent to technique, the film follows a Mexican-American and his comic misadventures with the Immigration and Naturalization Service. The picture gets a respectable number of laughs out of the parallel multiple misunderstandings of the non-Spanish-speaking hero stranded in Tijuana and his equally monolingual Mexican cousin in LA, with plenty of healthy digs at the crassness of white Americans in dealing with Latinos on both sides of the border; it’s down-home ethnic humor with lots of sentiment and sincerity. (Chong appears only as a painting of Christ on the cross with eyes that open and shut.) With a supporting cast including Daniel Stern, Kamala Lopez, Paul Rodriguez, and Jan-Michael Vincent. (JR)… Read more »