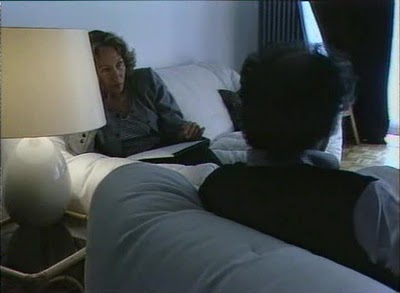 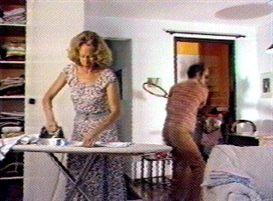 A 48-minute video that’s premiering in Chicago ten years after it was made, Jean-Luc Godard and Anne-Marie Miéville’s Soft and Hard (A Soft Conversation Between Two Friends on a Hard Subject) is so far in advance of most films and videos made today about the essential properties of both media that it makes not so much Chicago but contemporary Western culture feel like an intellectual backwater. It was commissioned by and originally broadcast on England’s Channel Four, and although most of Godard and Miéville’s talk is in French and subtitled, the funding source is acknowledged in several ways: by the video’s English title, by English intertitles throughout, by many stills from Hollywood pictures (including Frankenstein, Scarface, Rear Window, and the 1948 Joan of Arc) employed as punctuation, by an early sequence of Godard speaking in English on the phone about business arrangements for his film King Lear, and by a brief but moving exchange in English between Godard and Miéville that concludes the work. 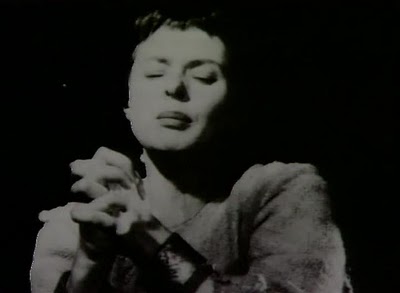 An intimate home video in most of its details and ambience — taped in and around Godard and Miéville’s adjacent homes in rural Switzerland and built around their normal daily activities — Soft and Hard gradually turns into a discussion of and meditation on the differences between TV/video (“soft”) and film (“hard”). The transition from domestic documentary to epistemological investigation is accomplished so subtly, on so many different fronts, that one can’t always pinpoint when and where it takes place. But key moments in this process include points at which TV screens and the images they contain impinge on domestic events (including the climactic conversation); a scene punctuated with freeze-frames showing Miéville at an ironing board, during which Godard, after taking several practice swings with a tennis racket, irascibly remarks, “So I’m making pictures instead of making children — does that stop me from being a human being?”; and a passage from Hermann Broch’s The Death of Virgil read aloud by Godard in the front seat of a car while Miéville goes for a walk (yielding a lyrical passage of superimposed pans across clouds and landscape). 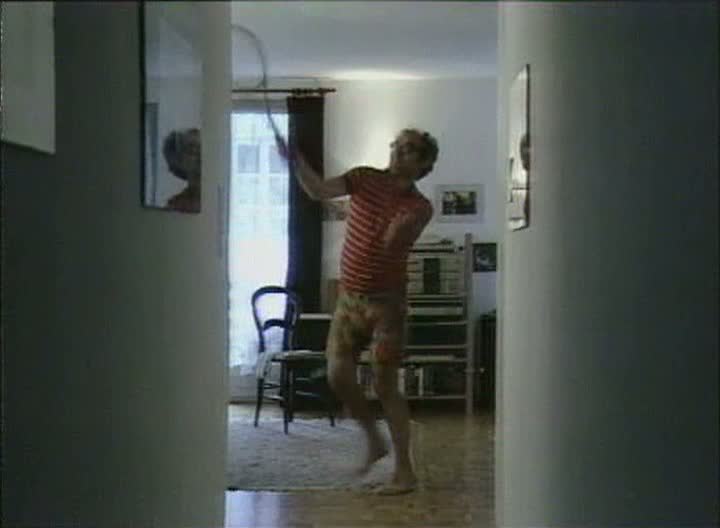 In these segments and a few related ones, the function of the video camera as a “soft” recording instrument is undermined whenever there’s a freeze-frame, slurred motion, or superimposition. All these techniques are of course available in film, but their use here tends to foreground the specific properties of video by disrupting our sense of a natural flow. There’s a playful innocence in these moments that recalls some of the earliest uses of filmmaking as a domestic “amateur” activity. Godard also played with slurred motion in his 1980 fiction film Every Man for Himself, in a manner that often suggested Muybridge’s early motion studies. But using a similar technique here in video produces a substantially different effect — a kind of smearing that suggests watercolors and is considerably more legato than the stop-frames of cinema.

Densely packed, as all of Godard’s best work is, Soft and Hard differs most strikingly from the equally packed “Parisian” phase of his work (stretching roughly from the 1960 Breathless to the 1972 Tout va bien) in its relaxed rural setting, which it shares with subsequent features like King Lear and Hélas pour moi. What differentiates film from TV and video may sound like a tired subject — after all, Marshall McLuhan was already calling TV a cool medium and film a hot one back in 1964. But it’s uncertain whether we understand these complex differences as well as we pretend to. Even our everyday conversations — when we talk about “seeing a movie on video” or “seeing a movie on television” — imply that we’re seeing the same movie we’d see in a theater and not a radically transmogrified version. Yet economic and practical considerations encourage us to shrug off the ontological and phenomenological differences. (With a few notable exceptions: art and film critic Fred Camper, a rare purist in this matter, refuses to preview films on video, arguing that it’s not the same art as would be seen in a theater. I can certainly see his point, but if I followed his rule I’d have to give up covering at least half the films I usually review for the Reader, especially independent, foreign, and older films.) Tragically but inevitably, as film-archive budgets are steadily gutted in this country, TV-rental outlets and home-video and laser-disc collections are becoming our only active “film libraries.” And because business thrives on this loss, we may even be persuaded to remove the quotation marks. 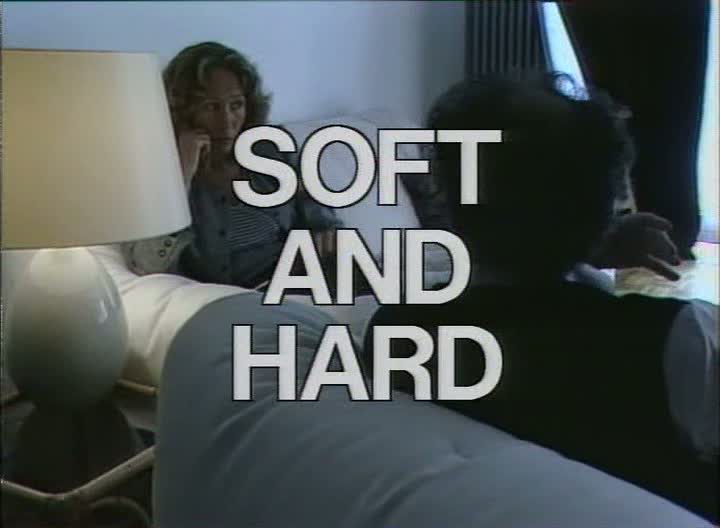 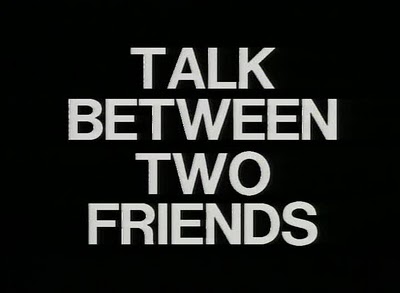 Soft and Hard begins, characteristically for Godard, with an offscreen monologue. We hear Godard’s voice over various fragments of the title (“Soft and Hard,” “Talk Between Two Friends,” “Hard and Soft,” “Two Friends,” “Soft Talk,” “Hard Subject”): “We were still looking for the path to our language. It was still the time of daily massacres in Beirut. It was already the time of glorious space flights to Mars and Venus, it was the time of private television’s triumph and of the dollar’s incredible rise, the time when trees were buried in the Black Forest and McEnroe was first defeated.” As Godard continues in this vein, we hear Miéville’s voice like an echo reciting the same text.

Miéville — initially a still photographer and subsequently a filmmaker — has been an important part of Godard’s life since the early 70s, when she nursed him through two and a half years of intermittent hospital treatment following a serious motorcycle accident. Miéville is now accorded cowriting, codirecting, and/or coediting credits on some Godard projects but not on all. Soft and Hard is probably the collaborative work in which she’s most frequently seen and heard (though she also figures fairly prominently in First Name: Carmen, where significantly she plays Godard’s nurse). And surely it’s the work that gives us the best, most precise depiction of how they collaborate. Among the many possible meanings of the title is that these adjectives apply to Godard and Miéville, though it’s by no means certain that Miéville is the “soft” member of the duo, despite Godard’s prominence in their scenes together. The late Serge Daney once described her highly critical offscreen voice in such films as Ici et ailleurs (1974) and Numéro deux (1975) as “cruel mothering.” But to my mind she saves both Godard and this video from the unchecked neo-Goethean excesses of self-regard and melancholia that characterize his more recent JLG by JLG.

In Philippe Dubois’ critical survey of Godard’s work in video and television called “Video Thinks What Cinema Creates” (included in Raymond Bellour’s collection Jean-Luc Godard: Son + Image 1974-1991), he usefully distinguishes six separate approaches Godard has taken since the mid-70s. First came the complex, innovative use of video within films — Ici et ailleurs, Numéro deux, Comment ça va. Then came the two TV series made for French television shortly afterward, 6 x 2 and France/tour/détour/deux/enfants. Next is “video before film” — that is, videos made as “scripts” or “scenarios” for films in preproduction, sometimes for producers, sometimes for Godard’s own purposes, beginning with the one he did for Every Man for Himself (1979) and continuing through Hail Mary (1985). Dubois adds to this category “video after film,” in Godard’s 1982 postproduction analysis of Passion. The last two types are “video instead of film” (the 1986 Grandeur et décadence d’un petit commerce de cinéma — which, if I’m not mistaken, is a video feature transferred to 16-millimeter) and “video about film, or cinema, or images in general,” which includes Histoire(s) du cinéma, several lesser-known works, and Soft and Hard. 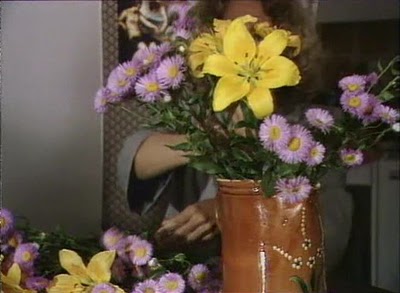 Indeed, Soft and Hard can be regarded in retrospect as a kind of necessary prelude to the still-in-progress Histoire(s) du cinéma — a work that examines film history “posthumously” in and through the “postfilm” medium of video. That connection becomes fully apparent, however, only in the extended dialogue between Godard and Miéville that dominates the video’s second half, shot from a single angle over Godard’s shoulder as he faces Miéville. This discussion begins with — and periodically returns to — Godard’s problems with his actors on Détective (also released in 1985), which Miéville traces in part to what she calls the weakness of Godard’s dialogue in the film’s love scenes. Godard basically concedes this weakness, remarking that his dialogue is “no better than Alan Parker’s,” and incidentally recalling a comment he made to me in a 1980 interview about his own limitations as a screenwriter and about the frequent disparagement of screenwriting among filmmakers: “Even if you say to a fellow director, ‘You’re better as a screenwriter,’ he feels puzzled, as though being a screenwriter is inferior. But I don’t think that. I think I’m not a very good screenwriter who can be a good director.”

Godard and Miéville’s discussion then drifts into comments about how each of them first discovered cinema. Miéville, who was forbidden to see films as a young child, constructed her own makeshift “cinema” in her bedroom out of a shoe box, a lamp, and the negatives of family photographs (a device that is incidentally re-created in Godard’s King Lear, made two years later). Godard, by contrast, only became passionate about cinema around the age of 20, thanks to visits to Henri Langlois’ Cinematheque in Paris. Eventually this develops into Godard’s discussion of TV as the “usurper” of cinema — a concept that becomes central in Histoire(s) du cinéma: “When I watch French television today, I think I know exactly how the French resistance felt about the German occupation or about the collaborators.”

Considering how important metaphor, simile, and subjectivity are to Godard’s poetics, it’s small wonder that he would lament the prosaic, antimetaphoric, and “objective” side of TV — a side that, in retrospect, the whole first section of Soft and Hard was devoted to trying to overcome through the expressive, playful use of freeze-frames, slurred motion, and superimpositions.

Godard synthesizes these concerns in a climactic meditation in Soft and Hard on film and video: “Cinema projects itself in a form of visual representation that people can recognize, so that the ‘I’ could be projected, enlarged, and could get lost. But its idea could still be traced back; there was a sort of metaphor. Television, on the other hand, can project nothing but us. So you no longer know where the subject is. In cinema, in the very idea of the large screen, like the myth of Plato’s cave, [you get] the idea of project, projection (which, in French at least, have the same roots: ‘project,’ ‘projection,’ ‘subject’). With TV, on the other hand, you feel you take it in — you’re subjugated by it, so to speak. You become its subject, like the subject of a king.” 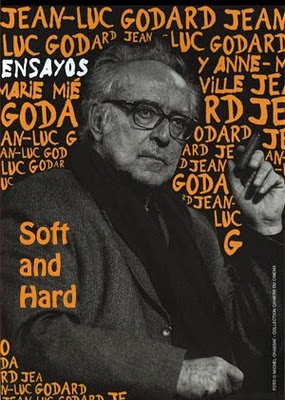