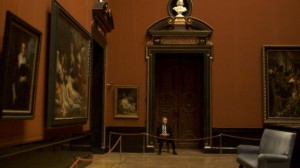 Marker’s more benign influence was especially evident in Jem Cohen’s magisterial Museum Hours, a luminous mix of fiction and essay set in Vienna itself, where it takes the form of a casual friendship developing between a guard at the Kunsthistorisches Art Museum (played by Bobby Sommer — a familiar and friendly Viennale presence, who has worked for many years at its guest office) and a Canadian tourist (Mary Margaret O’Hara) who arrives to visit a dying cousin and turns up at the museum. Delicately exploring the multiple relations between art and everyday life — what a visiting lecturer (Ela Piplits) in the museum’s Bruegel room aptly calls “hallucinations of the real” — Cohen even acknowledges Marker via his pseudonym “Krasna Sandor” in his closing credits, and though a family medical emergency of his own prevented Cohen from attending the screening (unlike his executive producer Patti Smith, who also stuck around to offer the Viennale a concert and poetry reading), he drafted a graceful statement that was read by Sommer, one describing Museum Hours (and film in general) as“a conversation with the world” in which everything became important: “there was no foreground or background or if there were, they might shift places at any time”. 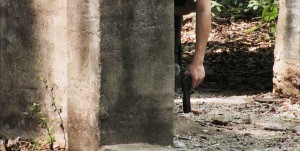 A very different but no less indelible Markeresque mood, closer to a highly charged poetry of absence built around an elusive thriller plot, hovers over João Pedro Rodrigues and João Rui Guerra di Mata’s haunted and voluptuously photographed The Last Time I Saw Macao. Less obviously, but no less decisively, a wordless travelogue that traverses the entire border between the U.S. and Mexico with a surveillance camera, Peter Bo Rappmund’s Tectonics, collapses formal inquiry into political investigation in a number of striking ways, recalling the melancholy compositions of both Benning and Akerman (as well as the brooding afterthoughts of Marker) while forging a multifaceted discourse of its own. 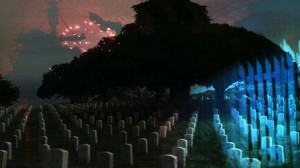 Even more directly, the collectively made Far from Afghanistan was inspired by the 1967 Far from Vietnam, overseen by Chris Marker and including work by Jean-Luc Godard, Joris Ivens, William Klein, Claude Lelouch, Alain Resnais, and Agnès Varda. A compilation feature instigated and edited by John Gianvito, incorporating work by Jon Jost, Minda Martin, Soon-Mi Yoo, Travis Wilkerson, and André Gregory (as actor), Far From Afghanistan has been described by some of my colleagues as “disappointing” in relation to its predecessor, but I suspect they have a distorted or incomplete sense of how the earlier film was received by its initial audiences. At the New York Film Festival press screening, there was as much booing as applause-–not only at the end, but at various points during the projection–and many scornful reviews followed, but Gianvito’s heroic effort has to confront a far more indifferent climate.

It’s worth adding that Far from Afghanistan wasn’t accepted by or shown at the New York Film Festival. Protests against the war in Vietnam were both widespread and fashionable, neither of which can be said about protesting the U.S. war in Afghanistan. Even the issue of neglect has been neglected: Mitt Romney didn’t even bother to mention Afghanistan in his speech at the Republican National Convention. But it’s characteristic of Gianvito to select topics that are anything but fashionable, even to Leftist orthodoxy—something already fully apparent in his multifaceted treatment of the first Gulf War in The Mad Songs of Fernanda Hussein (2001) and his mourning for the heroes of progressive causes in Profit Motive and the Whispering Wind (2007). His extraordinary 264-minute Vapor Trail (Clark) (2010), which charts some of the lingering and deadly toxic effects in the community around the abandoned Clark Air Force Base in the Philippines, remains completely unknown to most people, and if Gianvito were more of a serious hustler and correspondingly less serious about the world and about filmmaking, he wouldn’t already be working on a companion film, Vapor Trail (Subic), about the effects of the Subic Naval Base in the same country. It’s also characteristic of him that whenever he encounters Filipino interview subjects who don’t share his disgust with American negligence and indifference, even after losing many family members as a consequence, he doesn’t hesitate to include their contrary responses in his film.

There may not be anything in Far from Afghanistan as overpowering to me as the Norman Morrison segment shot by William Klein in Far from Vietnam. But by the same token, there’s nothing in the new film as embarrassingly solipsistic, at least from a non-French perspective, as the uncharacteristic Alain Resnais episode that features a Parisian expounding at length on his moral conscience to an obediently silent and attentive girlfriend, glimpsed in many reverse angles.What we’re offered is in fact even more unified by Gianvito’s editing as the earlier film is unified by Chris Marker’s, even though the unity in this case is far less obvious. In Wilkerson’s closing episode, “Fragments of Dissolution,” the relevance of interviews about the American victims of fires caused by illegal electrical hookups might well seem extraneous at first to the remainder of the film, but it’s central to Gianvito’s overall achievement to make and illustrate connections between diverse topics that are far from obvious; indeed, coping with disconnection — the Marker theme par excellence — is in many ways the driving force behind the film.