Not the Same Old Song and Dance

The Young Girls of Rochefort

Directed and written by Jacques Demy

As eccentric as this may sound, Jacques Demy’s 1967 Les demoiselles de Rochefort is my favorite musical. Yet despite my 30-year addiction to the two-record sound track, the first time I was able to see the movie subtitled was a couple of weeks ago — helpful considering my faltering French. It’s certainly the odd musical out in terms of both its singularity and its North American reputation — a large-scale tribute to Hollywood musicals shot exclusively in Rochefort in southwest France, and an unabashedly romantic paean to American energy and optimism that’s quintessentially French. It has a score by Michel Legrand that’s easily his best, offering an almost continuous succession of songs with lyrics by Demy, all written in alexandrines (as is a climactic dinner scene that’s spoken rather than sung); choreography that ranges from mediocre (Norman Maen’s frenchified imitations of Jerome Robbins) to sublime (Gene Kelly’s choreography of his own numbers); and perhaps the most beautiful dovetailing of failed and achieved connections apart from Shakespeare and Jacques Tati’s Playtime, shot during the same period. Read more

Trying To Catch Up With Raúl Ruiz: A Conversation with Jonathan Rosenbaum

This appeared Cinema Scope no. 11 (summer 2002).Thanks to Francois Thomas in helping me clean up my German and French. — J.R. 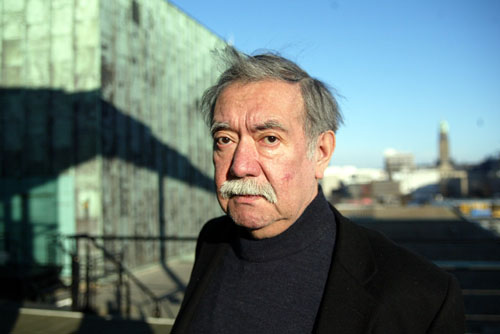 “You can’t smell email,” Raúl Ruiz insisted to me the night before we had this interview at the 2002 Rotterdam Film Festival, explaining to me why he didn’t have any truck with the Internet. He added that lately he’s been collecting various first editions, excommunications, and death sentences, many of them from the 19th century and earlier, and he can smell all of them.

At first I was surprised by this old-fashioned form of resistance, but then the more I thought about it, the more I realized that Raúl is basically a 19th century figure. His largely Borgesian canon of 19th and early 20th century English and American writers (Chesterton, Stevenson, Wells, Harte, Hawthorne, Melville, et al) and his taste for rambling narratives and tales within tales smacks of a Victorian temperament.

I first encountered Ruiz’s work during my first trip to the Rotterdam Film Festival, in 1983, and it was there where we first became friends three years later —- as well as where we had this interview on January 26, in the lobby of the hotel where we were both staying. Read more