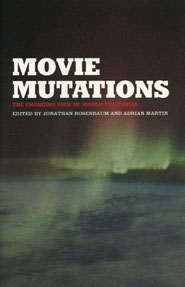 It’s by no means unusual for a “retired” film scholar such as myself to find more work as a freelancer since my retirement late last February than I did for most of the previous two decades as a staff reviewer for the Chicago Reader. Two of my contemporaries, both former academics and both friends of mine — the slightly younger David Bordwell and the slightly older James Naremore — have told me that they’re busier nowadays than they were when they were teaching. But what seems more surprising, at least to me, is how much of my time recently has been consumed by my participation in panels and symposia, both in print and in person, about the alleged death of film criticism. The October issue of Sight and Sound is full of ruminations on this subject, under such headings as “Who needs critics?” and “critics on critics”; so is the Autumn issue of Cineaste, where the stated topic is “Film Criticism in the Age of the Internet: A Critical Symposium”. A week from now, I will be flying from Chicago to the New York Film Festival to speak on a panel called “Film Criticism in Crisis?” (“Are we now facing the Death of Film Criticism — or its rebirth?”), appearing along with such print and Internet figures as Aquarello (the Internet pseudonym of Pascual Espiritu), Emmanuel Burdeau, David Hudson, Kent Jones, and Pablo Suarez.

Some of this fixation seems to stem from the unfortunate conflation of film reviewing (a profession that has suffered some recent losses in the U.S. since my own voluntary retirement, as a partial reflection of the many layoffs that have taken place this year in print journalism) with film criticism as a more general activity. And some of it seems to reflect an apocalyptic reflex that affects many of the arts (as in periodic  announcements about The Death of the Novel). Back in the 1990s, when I was shopping around a book proposal for a collection devoted to significant worldwide changes taking place in cinema and cinephilia — a book that was eventually published as Movie Mutations: The Changing Face of World Cinephilia (2003), coedited by my fellow columnist in these pages, Adrian Martin — one of the editors who rejected my proposal insisted on calling the project my “end of cinema” book, despite its mainly optimistic and even utopian focus. Maybe the problem was that, like many others, he regarded any change in the status quo of cinema and film criticism as the end of something rather than the beginning or the continuation.

One reason why film reviewing in the U.S. appears to be undergoing a loss of prestige is the rapid growth and expansion of Internet film reviewing and blogging, which has intensified the already popular idea that anyone can be a film critic (unlike, say, a dance critic or a sports commentator — two other professions in which some background knowledge is regarded as essential). Personally, however, I find that the distinctions usually made between professional and nonprofessional film critics in both journalism and academia are spurious. In response to Cineaste’s question, “Do you prefer blogs written by professional critics or those by amateur cinephiles?,” I replied, “I have no idea what differentiates `professional’ film critics from ‘amateur’ cinephiles, apart from the fake credentials dispensed by institutional bases — or the fact that `professionals’, whether they’re academics or journalists, don’t have to be cinephiles, don’t have to know anything about film, and don’t have to know how to write or do research in order to be regarded as ‘professionals’ within their respective professions. As for those with blogs, I prefer those who are cinephiles, know something about film, and know how to write and do research….”