Written for the 2019 catalogue of Il Cinema Ritrovato in Bologna. Tim Lucas has helpfully and subsequently furnished us with the following on Facebook: “According to his autobiography, Roger Corman — then a script reader at Fox — retrieved this script from a slush pile and presented it to a producer acquaintance as having worth, given a proper rewrite. He did it himself, then presented it to the producer, who — without telling him — got the film greenlit as a Peck vehicle and took all the credit. Corman promptly quit his job and set about becoming a producer outside the Hollywood studio structure.” —  J.R. 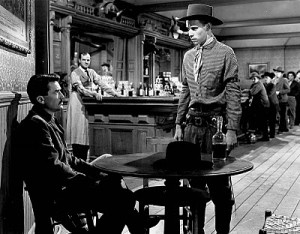 Commonly described as an “adult” Western, The Gunfighter (1950)  differs from both the Freudian Pursued (1947) and the classical The Furies (1950).  Though it comes close to equating screen time with real time, without any rhetorical emphasis (as High Noon brings with clocks), its method is historical revisionism, postulating a “real” West that tragically undermines the ones we accept in other Westerns. It plays an intricate double game with genre expectations, satisfying some demands and implicitly chiding us for certain others. Significantly, the film’s first and final images are almost identical but register as antithetical in moral significance. After all, the callow silliness of boys skipping school so they can witness a hoped-for shootout –occasioned by the even sillier macho pretexts of adolescent males for beating still older gunfighters to the draw — is not so different from the spell exerted by most Westerns, which take this sort of behavior with utmost seriousness. 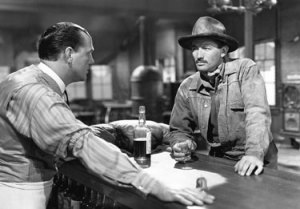 This film was reportedly first suggested by retired heavyweight boxer Jack Dempsey telling screenwriter William Bowers that kids kept trying to pick fights with him, and the script’s original title, The Big Gun, even stressed the sexual implications. But Henry King’s approach to this material, scripted by several hands (including Bowers, Andre De Toth, William Sellers, and producer Nunnally Johnson), is historical realism that strips settings, costumes, props, and hair styles of most of their glamour. Gregory Peck’s handlebar mustache even occasioned some executive resistance at Fox for what it did to his star image.

Speaking as someone who has always disliked the inauthenticity of Peck’s performances in Southern roles (notably in To Kill a Mockingbird and I Walk the Line), I’ve tended to regard him as a specialist in mythic archetypes rather than an actor capable of creating believable or complex characters. Given Jimmy Ringo’s status as a gunman and former bank robber trapped in the prison of his own reputation, Peck is unusually persuasive as an icon aspiring to an unreachable ordinary existence. 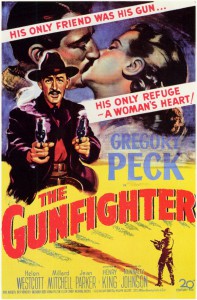