As nearly as I can remember, the following, signed “Jon Rosenbaum,” was hastily written at Bard College in the mid-60s for Pierre Joris, presumably for a never-to-be-published campus publication. 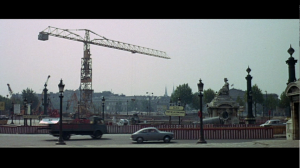 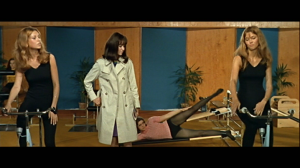 Ideally, Godard would like 2 ou 3 Choses que je sais d’elle and Made in USA (which he made during the same summer) to be screened together, in a single evening. The ideal method of screening — which Godard sees as a kind of homage to William Faulkner’s The Wild Palms— would be to show them ‘contrapuntally, ” by alternating the reels. To any viewer who has seen even one of these films, the idea induces vertigo; the prospect seems not unlike that of sitting down with both Finnegans Wake and a critical commentary on it, one on each knee, immediately after breakfast. A somewhat sickening thought, but after all, Godard is a critic as well as a filmmaker –like Joyce, a critic chiefly (one is tempted to say exclusively) of his own work. Like a house of mirrors, like Nabokov, like Finnegans Wake, Naked Lunch, and Becket’s trilogy, Godard’s work is largely an exercise in self-reflection: how does one make a movie? In Contempt, the question is. how does one make a big budget movie about making a big budget movie? and in 2 ou 3 Choses: how does one make a movie about the question, “How does one make a movie?”

Not only do Godard’s films question themselves; they question each other. As Richard Roud points out, 2 ou 3 Choses can be viewed as a thoughtful “remake” of The Married Woman, La Chinoise  (perhaps) a second version of Masculine-Feminine. (One might add that as a film about confusion about politics, Made in USA is “another draft” of Le Petit Soldat. )  On the matter of questions, let us go back to The Wild Palms. In the celebrated long bedroom-and-bathroom scene in Breathless, Patricia reads a sentence from the novel to Michel: “… between grief and nothing I will take grief. ” Which would you take, she asks Michel. After a bit of hesitation, a joke about her toes, Michel says, “Nothing.” 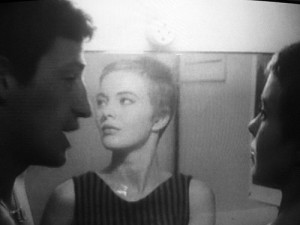 But Michel is lying, of course. What he chooses is not nothing but Patricia, who may look like nothing to us but is in fact pure grief for him. The situation can be expressed in terms of algebra: P = 0, M = Michel (“La vie, ” says Nana in Vivre sa vie “c’est la vie”; or as Michel himself puts it somewhat differently in Breathless “Killers kill, squealers squeal. ” Patricia, of course, is the squealer.) M+ P = Grief. M – P = Grief. M x P = O. In Masculin-Feminine, Paul remarks that in the word “masculin” you find “mask” (masc) and “ass” (cul), but what do you find in feminin? Rien. M x F = 0. A similar product is reached by multiplying the couple in Contempt, but there the whole matter is shrouded in mystery because neither of the characters are ever explainable — not to themselves, not to each other, not even (except remotely) to the audience. We do know, however, what sets the tragedy of Paul and Camille in motion: the compulsion of Paul to ask questions. 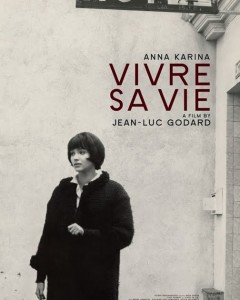