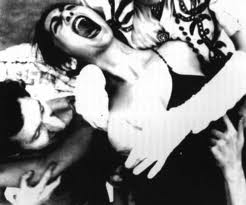 Looking back today at the legacy of Jonas Mekas (1922-2019) as a pioneer of American independent filmmaking, we like to think that he paved the way for us to enjoy our current freedom as spectators. When he was arrested for screening Jack Smith’s Flaming Creatures in New York City in March 1964, along with Ken Jacobs and Florence Karpf, we tend to suppose that this was eventually to ensure that we wouldn’t be penalized for watching the film today.

But maybe we haven’t advanced quite as far in our freedom and sophistication as we like to suppose. Such, at any rate, was my thought when I found myself censored on Facebook last week and banned from posting anything there for 24 hours when I tried to post the following two images: 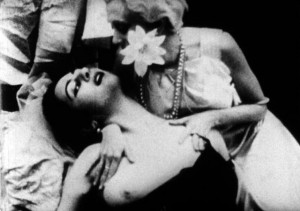 I assume it was the second image rather than the first that led to the censorship, but given the usual arbitrariness of what gets banned and why, how can I be sure? All I was doing was advertising the reposting of my own 1998 review of the film in the Chicago Reader (www.jonathanrosenbaum.net/2019/02/sweet-outrage/), and this unexpected glitch raised the question of whether Facebook’s objections were to the single bare nipple being exposed or to the fact that one (apparent) woman was amorously clutching another (apparent) woman. Whatever the precise cause of their disapproval, Facebook wasn’t saying; it only told me that “it doesn’t follow our Community Standards on nudity or sexual activity. No one else can see this post,” and after I successfully requested a review of their decision, they came back with the same verdict, expressed in the same vague terminology.

As I wrote in the Chicago Reader 21 years ago, “Implicitly or explicitly, all avant-garde cinema has a dialectical relationship to mainstream cinema, which usually means Hollywood. Apart from Joseph Cornell’s Rose Hobart (1939), Flaming Creatures may be the first major avant-garde movie to have embraced Hollywood even as it more implicitly defied its narrative procedures. In this respect it shares a kinship with found-footage films that use mainstream material — a relatively recent tradition stretching all the way from Craig Baldwin to Jean-Luc Godard’s Histoire(s) du cinéma to…Martin Arnold’s Alone. Love Wastes Andy Hardy….Flaming Creatures is mesmerizing and luscious partly because Smith is more interested in emulating various features starring Maria Montez or directed by Josef von Sternberg than in subverting them. It’s an act of love, not of revenge.”

But “historically, the impact of Flaming Creatures in 1963 had less to do with this love than with its presumed sexual content: flaccid penises, bouncing breasts, evocations of an orgy. The object of repeated police raids, it quickly became a cause celèbre for free speech in general and ‘underground cinema’ in particular, especially as these were being defined by critic and programmer Jonas Mekas, the film’s most vocal champion at the time. Smith saw the movie strictly as a comedy and eventually became so alienated by Mekas’s rhetorical and institutional appropriation of it that he never made another film that achieved a final form.”

But if you reproduce a single image from that movie in which a single nipple gets exposed and fondled for all the world to see — a nipple that presumably belongs to a woman and presumably is being fondled by another woman, though given the film’s overall exuberant pansexuality, who can be absolutely sure? — you run the risk of being unable to post anything on Facebook for 24 hours, as I was. So watch your step.

This was my second recent tangle with Facebook’s censorship. The first was occasioned by the following ad for a Fassbinder movie, which I used to advertise my mid-70s review of that film for Monthly Film Bulletin: 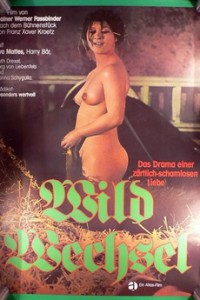 Facebook had absolutely no objection, however, when I came up with the following substitute image, taken from the same film:

This led me to conclude that if Alfred Hitchcock had had the unbridled nerve and savagery in 1960 to simply show a nude Janet Leigh taking a shower in Psycho and enjoying it rather than show her body double getting slashed to ribbons with a knife, he might well have faced serious trouble with puritanical American censors, so he took the easy way out and opted for “redemptive” butchery to reveal the proper moral response to such a spectacle. Thus Hitchcock paved the way for another kind of freedom—the kind enjoyed today by a Quentin Tarantino depicting any of his latest grudge matches rather than by any hedonistic disciple of Jack Smith. 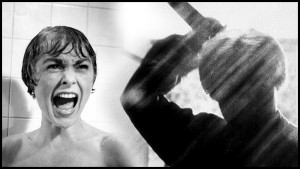 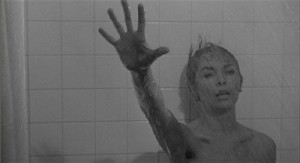 Was Jack Smith being political when he made Flaming Creatures? I believe he was, but when I interviewed Jonas Mekas at some length in 1982 for my book Film: The Front Line 1983, I discovered that we disagreed about this. Here are the most relevant parts of our exchange:

ROSENBAUM: There’s a way in which institutional acceptance and promotion can take the teeth out of certain kinds of art that have something to do with protest.

MEKAS: What art do you have in mind? The avant-garde of the Forties, Fifties, and Sixties had nothing to do with protest.

ROSENBAUM: You don’t think Flaming Creatures had anything to do with protest?

MEKAS: No, absolutely no. He [Jack Smith] was floating around in that kind of reality. He was obsessed with that reality; he had to do it, and he did it with his friends. It had nothing to do with any politics; it was his world, the life that he lived.

ROSENBAUM: Don’t you think that world and life was formed in relation to something else?

MEKAS: Later, once it was shown, it became political. But the creation of it did not come from any political necessity. On the other hand, if you listen to Jack’s soundtrack in Blonde Cobra, you can see that he himself, as a human being, did not like the type of civilization he saw around him when he walked down the street, obviously. So he created his own world that had nothing to do with what was going on around him in the offices or stores or Park Avenues.

Today, I would describe my disagreement with Jonas on this matter as somewhat more nuanced — especially after I learned from Ken and Flo Jacobs about Smith crossing their picket lines when Ken and Flo were on strike. But none of this is to suggest that Facebook’s censorship of an image from Flaming Creatures while presumably giving an immediate pass to images of any Tarantino bloodbaths isn’t profoundly political, in intent as well as effect. All of which suggests that one kind of violence and one kind of pleasure involving love is being forbidden, and another kind of violence and pleasure involving revenge is being permitted.