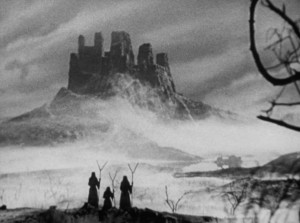 [Orson Welles’s] desire to transcend the barriers separating the classics, the avant-garde, and popular culture remains, I believe, his most enduring legacy. 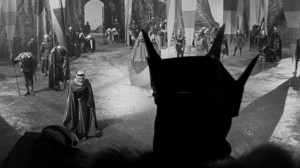 It seems probable that no American film director ever rattled the American mainstream more than Orson Welles, and none of his features rattled that mainstream more than his two versions of Macbeth, made successively out of the same material he shot in 1947, and released successively in the U.S. in 1948 and 1950. Welles’ fifth completed feature, it was the first of many that would come out in more than one version, and the first that decisively shifted his public status, against his own wishes, from that of commercial studio director to that of arthouse auteur — a profile that would be deviated from only by Touch of Evil a decade later, the only other studio feature he would ever make. 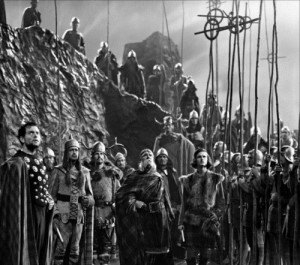 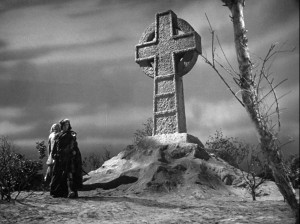 Welles’ approach to the material is wildly neo-primitive and so expressionistic that one can never be entirely sure whether the action is taking place in interiors or exteriors; the same ambiguity persists in the spoken text, where off-screen internal monologue and on-screen external speech often seem only a breath apart. The witches’ foaming, bubbling cauldron and Macbeth’s equally unstable consciousness are the closest we can get to any continuous sense of location, and the unabashed B-movie artificiality of the sets confirms that Welles wanted to draft something closer to a charcoal sketch than a finished canvas. This skyless world of cave dwellers and fog is split obscurely between pagan Druid artifacts that resemble pitchforks and the no less barbaric  crosses of early Christianity (the latter signaled by Alan Napier’s Holy Father, a character invented by Welles, whose lines are drawn from those of other characters) — a polarity that only intensifies the atmosphere of moral confusion. As in Welles’s never-realized first Hollywood project, Heart of Darkness, bestiality and tyranny are seen as opposite sides of the same coin. 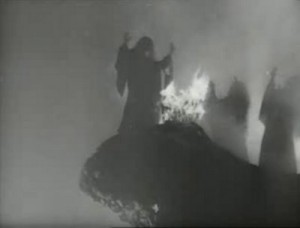 An aristocrat and a populist whose taste was both highbrow and lowbrow — and thus diametrically opposed to the middle-brow, middle-class taste that ruled American culture at mid-century, especially when it came to William Shakespeare — Welles, born in 1915, was as much a child of the nineteenth century as he was a prophet of the twentieth, which meant that his view of Shakespeare harked back to the time when Shakespeare was a staple of American popular “low“ culture, not a prized exhibit in elitist and effete “high” culture. As Lawrence W. Levine demonstrates in Highbrow/ Lowbrow: The Emergence of Culture Hierarchy in America (Harvard University Press, 1988), this was a version of Shakespeare subject to massive cuts and anachronistic interpolations, teeming with melodrama, that spoke directly to all walks of life: ”Shakespeare was performed not merely alongside popular entertainment as an elite supplement to it; Shakespeare was performed as an integral part of it. Shakespeare was popular entertainment in nineteenth-century America. The theater in the first half of the nineteenth century played the role that movies played in the first half of the twentieth: it was a kaleidoscopic, democratic institution presenting a widely varying bill of fare to all classes and socioeconomic groups.” As early as the 1830s, when he was touring the U.S., Alexis de Tocqueville found that “There is hardly a pioneer’s hut that does not contain a few odd volumes of Shakespeare. I remember that I read the feudal drama of Henry V for the first time in a log cabin.” 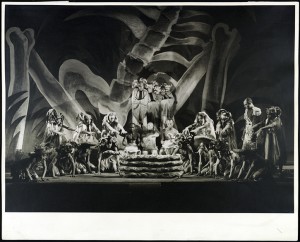 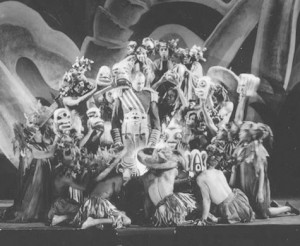 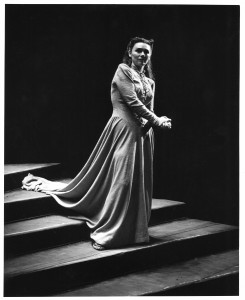 This lost tradition evokes Welles’ intentions for his film of Macbeth, but not, alas, the film’s negative reception in the U.S. (It was greeted much more favorably in France, where its champions included such filmmakers as Robert Bresson, Marcel Carné, and Jean Cocteau.) Yet it seems that Welles came much closer to succeeding on his own ambitious terms when he performed the play twice on the stage — first in Harlem in 1936, with an all-black cast and the setting switched to Haiti (his famous “voodoo” Macbeth), then in Salt Lake City in 1947 with the original Scottish setting, in preparation for the film, with the same principal actors he would use and elements of the same design. And in between those productions he did two audio versions, in 1937 on CBS radio (with Irving Reis directing) and then in 1940 for 78-rpm records (a full-scale performance by his Mercury players, with music by Bernard Herrmann, only three months before he began to shoot Citizen Kane — a recording that is still available today). 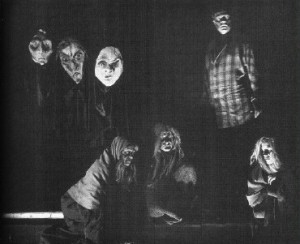 According to Welles biographer Simon Callow, the Salt Lake City production “was the sort of thing — less considered, less detailed, but equally electric in its impact — that Max Reinhardt had done in Salzburg: a kid of sophisticated folk theatre, attended by the whole town (or as near as dammit). It was, said Governor Herbert Maw,  ‘the greatest thing that ever happened in Utah,’ which certainly puts Brigham Young in his place.” It opened with the audience plunged into total darkness (even the exit signs were illegally masked) and listening to the sounds of six bagpipes slowly crossing the auditorium from the rear and then exiting, followed by an explosion in the orchestra pit that unleashed the three witches. Although the show ran for only four days (with two matinees added for schoolchildren), it received favorable reviews in both Variety and the New York Times. Yet when American reviewers encountered the film carved out of this production, it was almost universally scorned. Life magazine devoted a three-page spread to ridiculing it, headlined,  “MURDER! Orson Welles doth foully slaughter Shakespeare in dialect version of his Tragedy of Macbeth,” and remarked of one still, “The scene opposite is not, as you might think, from a musical comedy skit in an alcoholics’ ward…” 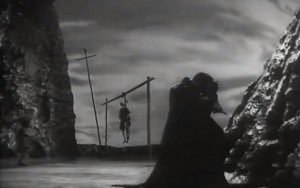 What happened? Obviously the differences between stage and screen are profound, but no one knew this better than Welles himself. Despite his plan to use the stage production as a sort of trial run for the film, he clearly wasn’t interested in simply filming that production but in making something different out of the same raw materials that was equally theatrical in its own way. Just for starters, he had a musical overture that lasted for almost eight minutes before the picture even started — utilizing not bagpipes but a sinister orchestral score by French composer Jacques Ibert that was recorded in Europe. (His original plan for Herrmann to write the score lamentably fell through because  Herrmann arrived in Hollywood before a rough cut was available, and he  refused to work without one.) Combined with three-and-a-half additional minutes of creepy exit music, this was a horror-show package designed to oppress the viewer on all sides. 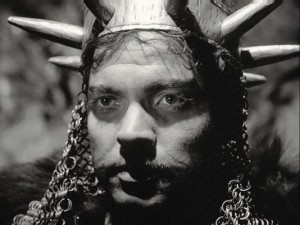 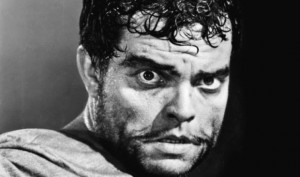 The fact that his film abounds in close-ups, which are impossible to achieve on the stage (and which Welles employed only sparingly, at a few key moments, in almost all of his other films), already proves that he was after something quite different from what he had done in Salt Lake City. More importantly, all his versions of Macbeth were part of a much larger effort on behalf of Shakespeare that included a book series called Everybody’s Shakespeare, coedited with Welles’s mentor Roger Hill in the 1930s, an accompanying series of audio recordings of four Shakespeare plays (the Mercury Text Records, the last of which was the aforementioned Macbeth), and various other forays ranging from a 1938 article about “the teaching of Shakespeare” to hosting and narrating a 1973 educational documentary about Macbeth. 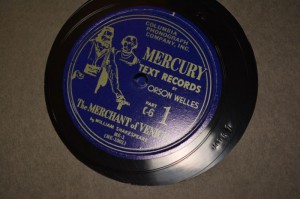 The timing of Macbeth’s 1948 premiere, in Boston — only a week after Laurence Olivier’s much slicker, highly revered, and distinctly middle-brow Hamlet (which had already garnered a celebratory eleven-page spread in Life) opened in the same city — couldn’t have been worse. By this time, Welles had already been persuaded to withdraw Macbeth from competition at the Venice film festival with the fear of Olivier’s Hamlet stealing its thunder there. And the U.S. reception was so poor that Republic, in panic mode, obliged Welles to cut half an hour from the film (including the ten minutes of overture and exit music), add an opening voiceover to paper over some of the gaps, and to redub much of what was left without the Scottish accents — although, to his credit, studio boss Herbert J. Yates allowed Welles to carry out this work himself. Welles had by this time relocated to Italy to star in Black Magic and start shooting Othello (his first independent production), and had to do the re-editing of Macbeth there, with associate producer Richard Wilson serving as stateside intermediary and Welles returning briefly to Republic only to supervise the redubbing. 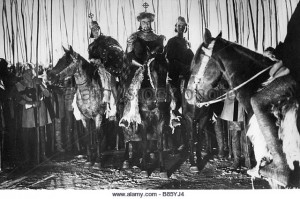 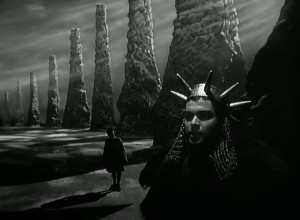 The curious fact that Macbeth resembles at times both a Western and a musical is actually intrinsic to how it was made. (It’s worth noting that in 1941, Welles, cinematographer Gregg Toland, and art director Perry Ferguson were scouting locations for a Life of Christ conceived as “a kind of primitive Western” set in turn-of-the-century America.) Welles shot it in only three weeks at Republic Pictures, a studio specializing in low-budget Westerns (and a few more costly ones, such as the subsequent Johnny Guitar), and the experimental method he employed was to prerecord most of the dialogue and then have the actors lip-sync it to playback, the same technique used for songs in musicals. This was a technique Welles had already tried out, and eventually rejected, on his second feature, The Magnificent Ambersons, but he had several reasons for reviving it here. Because he had to shoot everything in a hurry, often having two separate crews filming separate scenes at the same time, he figured that not having to worry about the dialogue being properly spoken and recorded at the same time would make it easier for both the actors and the crews. As a longtime veteran of radio, he thought a lot about sound, and he decided that thinking about the sound before and after the shooting would also give him more creative leeway.  Regrettably, the actors were also deprived of much of their potential spontaneity, and eventually the prerecording had to be tossed out for the redubbing. Another major loss in the second version was a ten-minute take recording all the events before, during, and immediately after the off-screen murder of Duncan, a year before Alfred Hitchcock made Rope (which consists largely of ten-minute takes). 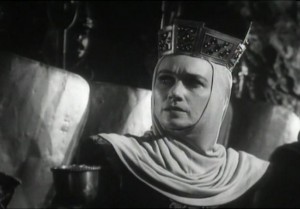 The film’s most poetic defense comes from Cocteau, who caught the film in Venice:  “Orson Welles’s Macbeth has a kind of crude, irreverent power. Clad in animal skins like motorists at the turn of the century, horns and cardboard crowns on their heads, his actors haunt the corridors of some dreamlike subway, an abandoned coal mine, and ruined cellars oozing with water. Not a single shot is left to chance. The camera is always placed just where destiny itself would observe its victims. Sometimes we wonder in what period this nightmare is unfolding, and when, for the first time, we see Lady Macbeth, before the camera moves back to situate her, it is almost a woman in modern dress that we are seeing, reclining on a fur-covered divan beside the telephone.” 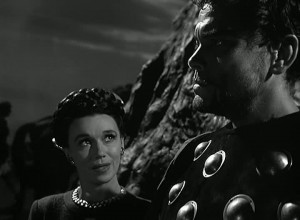 Callow notes that this description makes it all sound like a Cocteau film, which he finds “misleading”. But one could also argue that the comparison is apt: both directors are “amateurs” in the best sense (the term derives from the Latin word for “lovers”) who playfully juxtapose ancient with contemporary, and both display a knack for making theater cinematic and cinema theatrical — which helps to explain, as Cocteau recounts in the same essay, Welles’ own appreciative enthusiasm when he saw Cocteau’s Les Parents Terribles at the same Venice festival. We also know that while Welles was scrupulous about making most of the costumes and sets in Macbeth historically accurate, he was no less explicit about making his Lady Macbeth anachronistic — a rather jaundiced version of the contemporary glamour-puss housewife. In other words, Welles’s experimental hodgepodge, second-guessing us all while playing for the rafters, is as challenging now as it was in 1948. 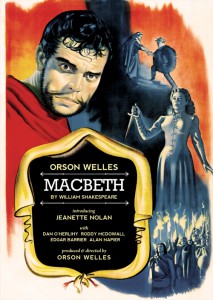