This profile was published without title in the December 1983 issue of Omni, in a section simply called “The Arts”. -– J.R. 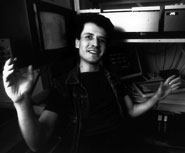 It makes perfect sense that Manuel De Landa, a thirty-year-old Mexican anarchist filmmaker who specializes in the aesthetics of outrage, inhabits a midtown Manhattan apartment so tidy and upstanding that it could almost belong to a divinity student. The point seems to be that if you want to shake the civilized world at its foundations, it helps your credibility if you wear a jacket and tie — especially if you speak with an accent that makes you sound like Father Guido Sarducci. For a talented artist who has an asocial image to sell and a highly social way of putting it across, it isn’t surprising that De Landa makes wild, aggressive films that leap all over the place while standing absolutely still. In The Itch Scratch Itch Cycle (1977) and Incontinence: A Diarrhetic Flow of Mismatches (1978),quarreling couples in tacky settings are subjected to all kinds of optical violence:The camera moves around them in the shape of a figure eight, or De Landa crazily cuts back and forth between two static shots of the principals screaming at each other — as if he were a mad scientist, controlling their shrieks with the twist of a knob. 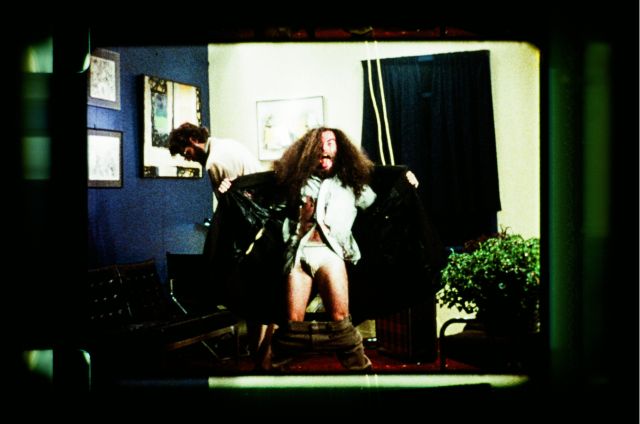 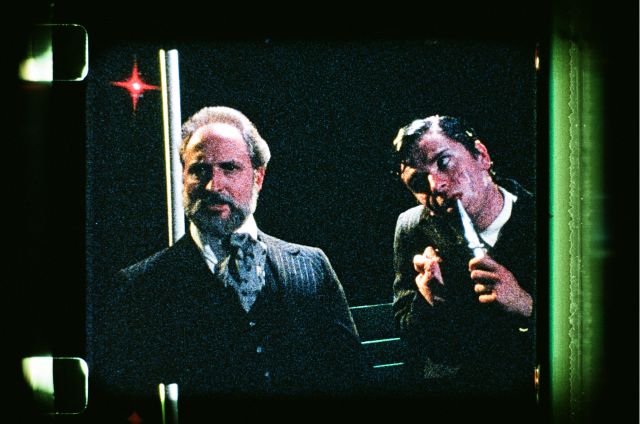 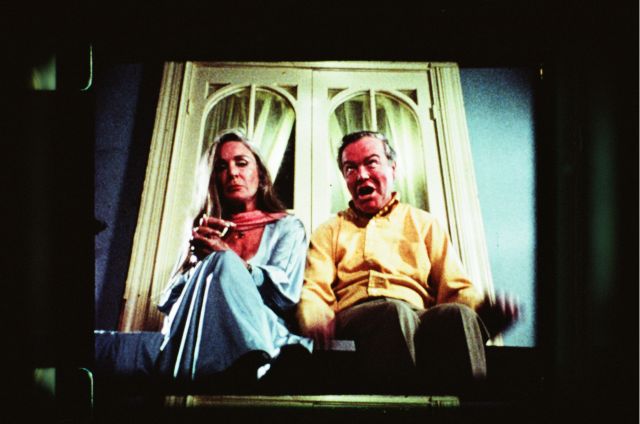 In his Massive Annihilation of Fetuses(1982), shot in super-8 and announced as part one of his projected Jerry Falwell series, De Landa films cockroaches and then plays God by delivering afflictions of an almost biblical nature on them.A slab of striped toothpaste, a screw, and the prong of a fork successively drop from the sky to crush three bugs. Others are sliced by a razor, drowned in honey,or ignited by a match — all the carnage accompanied by high-pitched screams furnished by De Landa and his girlfriend. “The film is my tribute to the real master race that will soon inhabit the planet,” De Landa offers by way of explanation, clarifying his intentions by revealing that his sadism is actually a form of advance revenge for a species that, unlike mankind, might actually survive a nuclear holocaust.”Cockroaches not only invaded the flip side of my house — the back of my kitchen, the other side of my walls,” De Landa continues, describing his more bohemian digs before he moved uptown, “they have also taken over some areas of my unconscious. Whenever the flip side of things appears in my dreams, it is always intensively populated by hundreds of these perfectly designed creatures. Ever since I started the film, the structure of my nightmares has changed, almost as if I had violated the cockroaches’ laws, and they were getting ready for their own revenge.”

He brings a touch of the happy charlatan to his glitter-punk credentials that hark back to such Spanish-speaking masters of surrealism as Fernando Arrabal, Luis Buñuel, Salvador Dali, and Alexandra Jodorowsky. Unlike most of his predecessors, however, De Landa prefers LSD and computers to the sacraments and Antichrists of Catholicism in establishing the paradoxical terms of his shock (and mock) rebellion.

One of his most modest efforts. Magic Mushroom Mountain Movie, charts his eight-year relationship with a Mexican family that used psychedelic mushrooms as part of its religious ritual.Although gross-outs of various sizes and shapes are a kind of De Landa trademark (he considers Frank Zappa’s early rock albums seminal influences),an intellectual bent— fueled by an odd mixture of arcane French theory and late-night TV — seems no less apparent. In Raw Nerves: A Lacanian Thriller (1980),a private eye out of the paranoid film noir tradition stumbles upon a coded message on a roll of toilet paper in a men’s room stall. The resulting intrigue, which improbably mixes Mickey Spillane slang with an allegory about the Oedipus complex, is defined by De Landa as “my personal testament against psychoanalysis. The main point of the movie,” he tells me somewhat more obscurely, “is that the words on the toilet paper are the final scribble of a man who has just taken his last crap in this wo 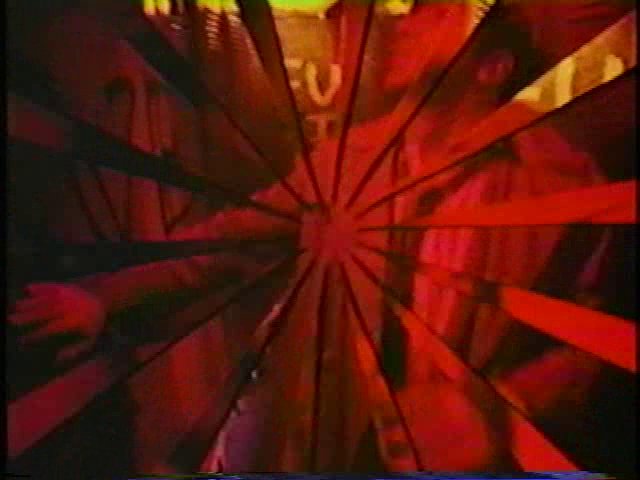 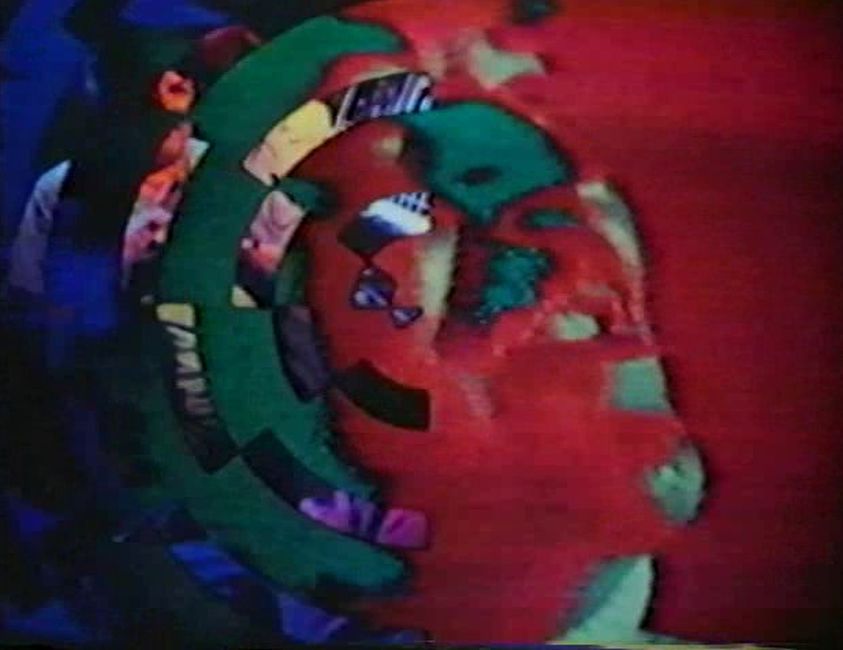 A former film student who recalls growing up in the most Americanized Mexico City suburb, De Landa currently makes a living working on computer animation for TV commercials, which may help to account for the relatively straight persona he presents to the world today. (That he is a student of analytical philosophy in his spare time also adds to the image of respectability.)Seven years ago De Landa was filling New York with graffiti— mainly monstrous, gaping lips, teeth, and eyes affixed to, or transplanted from, various street posters.At that time, he was arrested for defacement of public property and possession of marijuana but was released a few hours later. At a recent screening of most of his films, including Ismism, a super-8 chronicle of his graffiti-making activity of that period, he distributed photocopies of the police report as program notes.

Apart from the facial distortions, De Landa’s graffiti consisted of individual words painted all over New York with a spray can.He filmed each word in a static shot, then strung shots together to form sentences — secret messages discernible only to people watching the movie: “use/illegal/surfaces/for/your/ art,” says one of these messages; “let/ the/slang/of/your/desires/drive/language/crazy,” says another. In one of the two rooms of De Landa’s apartment, there are two walls of bookshelves that reflect his interests in physics, philosophy, and technology.

A recent book that interests him especially is a study of computer crime. For De Landa the liberation of technological society will come not through careful planning but through the mischief of perverse-minded teenagers who, for the sheer hell of it, are dreaming up ways to jinx the country’s computer systems.In the other room of his flat is the most treasured of all his toys, a recently acquired image processor that’s programmed to construct video images 500 lines high and 500 lines across. It’s a monstrous piece of computerized equipment with which, it would seem, De Landa hopes eventually to disrupt the planet’s future, à la WarGames. (At points in our discussion, he compares a computer to a gun.)Despite De Landa’s respect for technology, he expresses some admiration for certain old-style rebels whose forms of outrage are more primitive and pre-industrial than his own. Perhaps the most extreme of these is the legendary Professor Mamboozoo, an underground cartoonist who has appeared in a couple of his films and whose exploits have earned the professor a reputation that makes De Landa seem tame by comparison.

Characteristically, when Mamboozoo met underground filmmaker John Waters at a premiere several years ago, his unconventional form of paying tribute was to bite Waters’s hand. More frequently Mamboozoo’s specialty is to put aluminum foil on his chest, tape a string of firecrackers to it, put them all on a single fuse, replace his shirt and coat, and blow himself up — an act he performs for the camera in Incontinence, all the while leaping about like the Wild Man of Borneo.

But the most notorious of all De Landa’s collaborations with Mamboozoo took place at an avant-garde program held in 1981 at The Kitchen, in lower Manhattan, when DeLanda hired the professor to contribute his own form of Dada assault. After lying to the show’s organizers (De Landa said he’d appear with papier-maché sex organs), the two concocted a sort of voodoo ceremony under Mamboozoo’s guidance, which involved a double-barreled shotgun loaded with blanks, the freshly decapitated heads of a pig and a cow (acquired at a New Jersey slaughterhouse), and large quantities of boxed snakes, frogs, mice, and crickets that were either released or thrown at the audience after the shotgun was fired.

“Now that’s all that was in the script,” DeLanda explains, almost nostalgically. “But of course Professor Mamboozoo had to do something that would shock me, his assistant, too. So at this point I had the snakes and frogs, and he had the mice. They started to crawl on him and bite him — we had to give him rabies shots afterward — so he started biting back and biting their heads off.” By this time most of the audience had fled the premises; it’s no surprise that De Landa hasn’t been invited back to The Kitchen for any encores.

Most often, however, the violence implicit in his work is internalized and formalized in the form of hallucinogenic Day-Glo colors and giddy optical devices — making one feel at times like a fruit salad inside a blender. In Incontinence the image splits into halves, characters drop from nowhere into a room, and Mamboozoo enters the scene by emerging from a suitcase.

In Raw Nerves, where the garish colors are even louder, one eventually discovers that the off-screen narrating voice of the gumshoe hero actually belongs to a woman, who promptly announces, “Never trust a first-person pronoun,” before shooting her male alter ego dead. Oddly enough, this overall concept of the movie stems from French psychoanalytic theory whereby the private eye equals the private male ego, and the public space of a men’s room represents the site of a child’s first encounter with language. As De Landa puts it, “Displacing the primal Oedipal scene from a private, middle-class warm space to a public, cold, wet public bathroom is a way of saying that your first encounter with language is never a private little cozy event. Your father is always somebody else’s boss and servant — there’s always the social field present.”

Negotiating this social field as a wild man with charisma, De Landa works both sides of the street with a gleam in his eye,just like his films — carrying us nowhere and everywhere at the same time.