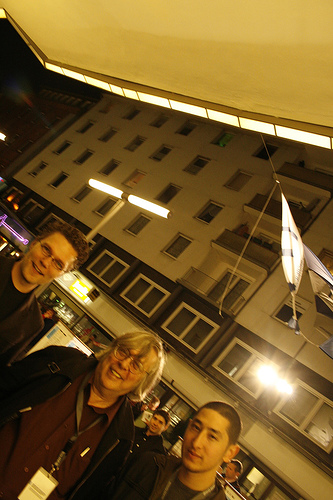 I no longer recall who snapped this deliberately lopsided photo of Oliver Baumgarten (left), Alexis Tioseco (right), and me in spring 2007, when the three of us were the entire FIPRESCI jury at the Oberhausen International Short Film Festival. Our prize that year went to an eye-popping masterpiece, Amit Dutta’s Kramasha (To Be Continued…), from India — which later became one of the five late (2007) entries to my list of all-time favorite films in the Afterword of the second edition of my collection Essential Cinema — and discovering that great film with Alexis was for me the absolute high point of the festival.

As some of you have heard by now, Alexis, who was 28, and his Slovenian partner Nika Bohinc, who was almost 30 and another very talented film critic, were murdered yesterday in their home in Quezon City, the Philippines, apparently by burglars. Nika, whom I also knew, but less well, had only recently moved there from Ljubljana, Slovenia; Gabe Klinger has just posted a very tender and affectionate piece about both of them a few hours ago. And for the moment, at least, one can still access Alexis’ excellent web site, Criticine. (Postscript, 9/3/09: Adrian Martin writes from Melbourne that Nika’s own Ekran blog, also [mostly] in English, which I haven’t encountered until now, “with many fine pieces, is still also accessible”.)

I still have a good many emails from Alexis on my server, spanning at least four years. The first was sent in 2004, and it wasn’t until two years later that we finally met, briefly, before a screening of the first half of Rivette’s Out 1 in Vancouver. Then, after we worked together in Oberhausen, we had many more exchanges. I sent him a copy of a documentary about Lino Brocka that I had and he sent me a good many Filipino films that he thought I should see. He wrote me in late November, asking something about the Portuguese box set devoted to Pedro Costa’s Where Lies Your Hidden Smile? that I’d written about in my DVD column for Cinema Scope, and then again in early April, informing me, in response to another one of my DVD columns, that Chris Marker’s One Day in the life of Andrei Aresenvich was available on a DVD in the U.K. All of which I’m bothering to mention in order to suggest how wide and comprehensive and serious Alexis’s interests in film were.

It’s not enough to say that he and Nika will be sorely missed. I already miss them both. [9/2/09]