One possible point of interest about this piece of juvenilia is my early comparison of Pynchon with Rivette in relation to what might be called the poetics of paranoia, a subject I would return to. For whatever it’s worth, the disappointment I’ve generally felt regarding Pynchon’s post-70s work is matched by the overall disappointment I’ve felt regarding Rivette’s post-70s work, and in both cases I’ve felt guilty about this, because the work I prefer  tends to be less sane (and therefore less conventional and more avant-garde) than the work that follows it. —J.R. 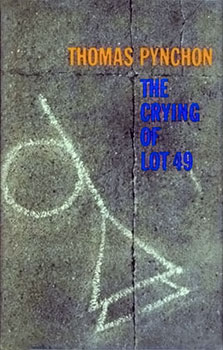 When a first novel called V. came out five years ago, many of the reviews consisted of little more than fevered speculations about what the author could be up to. A genuine sense of mystery surrounded the book: half of it was given over to a character named Benny Profane, “a schlemiel and human yoyo” who spent his time riding the Times Square shuttle, shooting alligators in the New York sewer system, and living a life of cultivated inertia (like Beckett’s Murphy) in a loose circle labeled the Whole Sick Crew; the other half followed Herbert Stencil, an occasional friend of Profane’s, on a complex, increasingly impenetrable quest to learn the history of a mysterious female agent  known as V. Most readers of the novel, including this one, felt more comfortable with the Profane sections –- plotless as they were, they painted a picture in depth of people living in emotional shell shock, numbed by World War II and the torpor of the Eisenhower era  to the point of being uninvolved even with themselves. The Stencil sections, less comic and more ambitious, reflected Pynchon’s apparent obsession with history: beneath all the intrigues, atrocities, and enigmas surrounding the figure of V., Stencil was searching for an illuminating pattern, a key to the past that would explain and justify — hence liberate — the present.

What made the quest of Stencil doubly confusing (and ultimately tedious) was Pynchon’s encyclopedic knowledge — so many facts were given about medicine, history, geography, and a profusion of other subjects that it was often impossible for the reader to tell whether Pynchon was leading him into or out of reality. This indeed was part of the novel’s subject –- the unknowability of our heritage –- and it is the central concern of The Crying of Lot 49.

Oedipa Maas, a young housewife living in California, after being named the executor of a vast estate left by an ex-lover, stumbles upon what appears to be an underground postal system, centuries old, which is devoted to bypassing the government’s distribution of mail. Like the elusive V. in Pynchon’s first novel, this organization (Tristero) is a multi-faceted symbol, and Oedipa’s quest to uncover its meaning is as religious in its implications as Stencil’s; it comprises an heroic attempt to discover a logical pattern behind the prolific senselessness (what Norman Mailer calls the “cancer”) of modern America:

“She looked down a slope, needing to squint for the sunlight, onto a vast sprawl of houses which had grown up all together, like a well-tended crop, from the dull brown earth; and she thought of the time she’d opened a transistor radio to replace a battery and seen her first printed circuit. The ordered swirl of houses and streets, from this high angle, sprang at her now with the same unexpected, astonishing clarity as the circuit card had. Though she knew even less about radios than about Southern Californians, there were to both outward patterns a hieroglyphic sense of concealed meaning, of an intent to communicate.”

The curious paranoiac tone of this passage has a contemporary ring to it. One can find echoes of the same sentiments –- and very nearly the same plot –- in Paris nous appartient (Paris Belongs to Us), a striking French film of a few years ago, in which the heroine tries to uncover what appears to be a world-wide conspiracy but might be nothing more than a day dream; predictably, the film encountered a hostile press in America,  just as Pynchon’s book is getting short shrift from such literary quarters as Time, which wonders with austere sublimity Why Such Novels Ever Get Written. (A simple answer to their query would be apparent if they bothered to leaf through their own magazine.)

One advance that Pynchon has made in The Crying of Lot 49 is his greater concentration: although the new novel lacks some of the breadth of V. (being only a fraction as long), there is scarcely any excess. The two plots of V. are in effect fused here, so that in the course of Oedipa’s search we get a sharp satirical portrait, disturbing as well as comic, of the West Coast -– an embodiment of current life and habits that are precisely what drives the heroine to distraction and frustration, and eventually creates her need to find out more about Tristero. In many respects, the bizarre portrayal of modern California suggests an updated Nathanael West: one scene, in which Oedipa gets caught up in a dance at a deaf mutes’ convention, could have come straight out of The Day of the Locust.

Considering Pynchon’s gifts, there are some unfortunate lapses in the book. His style, which is generally fluid and colloquial in a natural way, occasionally becomes muddy and inadequately polished: after a host of characters with names like Genghis Cohen, Randolph Driblette, and Manny DiPresso, one sometimes suspects that Pynchon wants to trivialize his own satire by giving it a harmless edge of Mad Magazine humor. But lapses notwithstanding, The Crying of Lot 49 gives us a delineation of America too funny not to be taken seriously, and too serious not to make one profoundly uneasy.
—Bard Observer, May 24, 1966 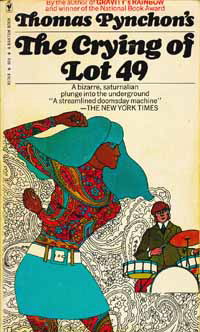