Written in 2013 for an expensive book on Jacques Tati prepared for Taschen by Alison Castle.  — J.R. 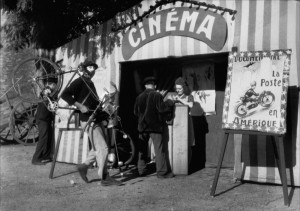 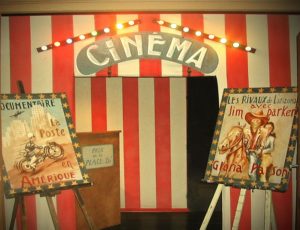 1. A Parisian Discovers the Countryside 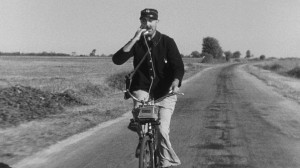 In 1943, Jacques Tati, age 34, was living in occupied France. He had played rugby, become a successful music hall performer, and acted in a few short comic films. That year he left Paris with a screenwriter friend named Henri Marquet in search of the remotest part of the country they could find, hoping to escape recruitment as workers in Germany. They finally settled on a farm near Sainte-Sévère-sur-Indre, located in the dead center of France — not far from where George Sand had entertained such house guests as Chopin, Liszt, Flaubert, and Turgenev — and spent a year or so getting acquainted with the village and its inhabitants. 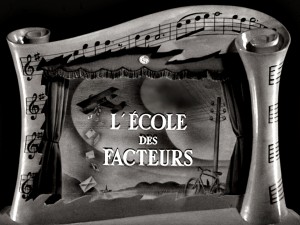 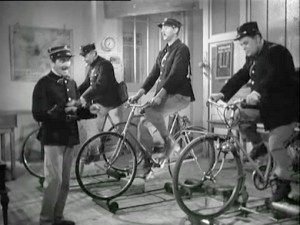 Two years after Germany’s surrender, Tati and Marquet returned to the village to make a short film, L’école des facteurs (“The School for Postmen”), in which Tati played François, the village postman, who delivers the mail on a bicycle. François was based loosely on a bit character — a befuddled postman, played by another actor — in Soigne ton gauche (1936), a comic short Tati had written and starred in.  Read more

From Film Comment, July-August 2001. I’m sorry that I haven’t been able to provide many illustrations for this that are tied to the films and videos discussed. Many of the ones I’ve used are drawn from earlier or later works by Saks, including paintings and photographs. — J.R. 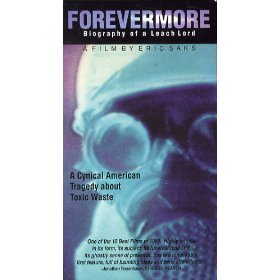 It’s tempting to call Eric Saks’ preferred mode, in video and film alike, the pseudo-documentary — though there are times, mainly during my more apocalyptic moods, when I wonder if any other kind of American documentary currently exists. It’s less speculative to say that two of Saks’ main subjects are ecology and waste, but if you extend the meaning of those terms logically, you come up with just about the entirety of the sad American empire, President George W. Bush included.

Place Saks’ work in a drawer marked “weird stuff” or “marginal,” regardless of whether that drawer stays open or closed, and the gesture becomes the same kind of empty, self-fulfilling market judgment that his work laments — like the current functioning of national boundaries, simply a blind stab at demographics and market research rather than any valid estimation of universality. Yet Saks’ remarkable, neglected early 16mm feature Forevermore: Biography of a Leach Lord (89) and his more recent videos like Creosote and Dust breathe an everyday American desperation that we can all recognize, even when it comes wrapped (as it often does) in a literary tradition — a form of layered, weathered melancholy about American hunger that Thomas Pynchon captured perfectly (albeit in a more hippie-humanist register) on an early page of his 1966 novel The Crying of Lot 49. Read more 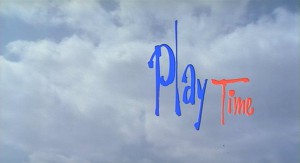 First of all, what is the title?  Like most other critics, I’ve generally known and written it as Playtime, but the final draft of the screenplay in late 1964 called it only Film Tati No. 4. Other early and tentative titles included Récreation (Recess) and La grande ville (The Big City).  In 1979, based on the credits sequence and ad logos, film academic Kristin Thompson wrote that the correct title was Play Time. But according to this volume’s editor, “Tati himself referred to it in correspondence always in capitals and always (at least from what I’ve seen) as one word,” i.e. as “PLAYTIME”. And “Macha Makeieff, as the rights holder to the Tati estate, took an official decision a few years back that the official spelling is now to be ‘PlayTime,’ i.e. in one word but with a capital ‘T’.”

Do such distinctions matter? I think they do. American historian Rick Perlstein has called “Play Time “a sentence, not a word, and a command,” adding that one can even “read it as two verbs, a double command.” Read more