Curiously, the Chicago Reader’s web site dates this capsule review in October 1985, two years before the film was made. I first saw it at the Toronto Film Festival in September 1987, and believe I reviewed it not too long afterwards. — J.R. 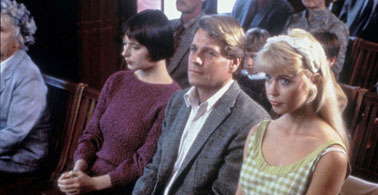 Norman Mailer’s best film, adapted from his worst novel, shows a surprising amount of cinematic savvy and style from a writer whose previous film efforts (Wild 90, Beyond the Law, Maidstone) were mainly unvarnished recordings of his own improvised performances. Working for the first time with a mainstream crew and budget and without himself as an actor, he translates his high rhetoric and macho preoccupations (existential tests of bravado, good orgasms, murderous women, metaphysical cops) into an odd, campy, raunchy comedy thriller that remains consistently watchable and unpredictable — as goofy in a way as Beyond the Valley of the Dolls. Where Russ Meyer featured women with oversize breasts, Mailer features male characters with oversize egos (although the women here also do pretty well in that department), and thanks to the juicy writing, hallucinatory lines such as “Your knife is in my dog” and “I just deep-sixed two heads” bounce off his cartoonish actors like comic-strip bubbles; even his sexism is somewhat objectified in the process. Coaxing good performances out of his male actors (Ryan O’Neal, Lawrence Tierney, Wings Hauser) and mannerist displays from his actresses (including Isabella Rossellini and Debra Sandlund), he is certainly capable of broad strokes — the southern accents are laid on with a trowel — but his framing, editing, and uses of sound and music are often fresh and tangy. Whatever has induced Mailer to clean up his act, he has introduced an effective (if convoluted) flashback structure, trimmed the fat off his prose, eliminated digressions, and shown some genuine flair with his Provincetown locations, including his own home. The results are giddy and singular — 100 percent Mailer, and one of those rare occasions when a novelist’s obsessions and vision have been brought to the screen intact. (Chestnut Station, Ford City East, Deerbrook)