John Ford’s first film in ‘Scope also happens to be one of his major neglected works of the 50sa biopic of epic proportions (138 minutes) about West Point athletic instructor Marty Maher (Tyrone Power), who was a mess-hall waiter before joining the army but returned to West Point to become a much-beloved teacher — an example of the sort of victory in defeat or at least equivocal heroism that comprises much of Ford’s oeuvre. Adapted by Edward Hope from Maher’s autobiography, Bring Up the Brass, the film is rich with nostalgia, family feeling, and sentimentality. It’s given density by a superb supporting cast (including Maureen O’Hara at her most luminous, Donald Crisp, Ward Bond, and Harry Carey Jr.) and a kind of mysticism that, as in How Green Was My Valley, makes the past seem even more alive than the present. Clearly not for every taste, but a work that vibrates with tenderness and emotion (1955). (JR) 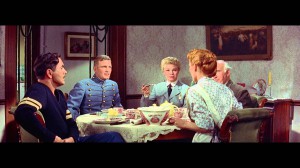