The following selection is not only personal but very eclectic. It’s not exactly a list of my favorite films: I prefer Erich von Stroheim’s Foolish Wives (1922) and Greed (1924) to his Blind Husbands (1919), for instance, and if I had to take one Anthony Mann film along with me to a desert island, this would undoubtedly be The Naked Spur (1953) rather than his Man of the West (1958). Similarly, my favorite films by Nicholas Ray are probably Johnny Guitar (1954) and Bitter Victory (1957), even though Party Girl (1958), for all its flaws, is still a Ray film that I’d describe as sublime. But I’ve opted in these cases for the DVDs devoted to Stroheim, Mann, and Ray that I cherish the most, and the reasons why I cherish them are stated below.

A few other caveats:

(a) There are at least two other editions of Carl Dreyer’s Gertrud (1964) —- the U.S. one from Criterion and the English one from the British Film Institute—- that are top-notch, and they’re probably easier to come by in the Western hemisphere than the Australian edition on the Madman label that I cite. But it’s only the Australian edition that has Adrian Martin’s wonderfully penetrating and thoughtful commentary, which is why I’ve opted for including that one.

(b) I’ve aimed overall for a certain geographical spread, with the result that releases from Australia, Austria, China, England, France, Italy, and Portugal (and films from Austria, China, Denmark, France, India, Iran, Portugal, and the U.S.) are included. But I hasten to add that the fact that two of these releases come from Austria, two from Portugal (both of which are by the same filmmaker, Pedro Costa), and three from France doesn’t mean that I’m ranking these countries overall as purveyors of DVDs over any others — nor am I necessarily ranking Costa over all other Portuguese filmmakers. I may also be technically cheating a little by including one all-region or region-free DVD, Tian Zhuangzhuang’s The Horse Thief (1986, from mainland China), on my list.

(c) I’ve made room for three collections of short films as well as ten features (one of these DVDs, devoted to Andy Warhol, carries two short features).

(d) One of the French releases — Un feu + La maison est noire, two Iranian short films included as part of a now-defunct French film magazine — isn’t outfitted with English subtitles, unlike the five DVDs I’ve included that don’t have English-speaking features, which are. I’ve also included one French film (Où gît votre sourire enfoui?) that’s on a Portuguese DVD, Onde Jaz O Teu Sorriso?, which is boxed along with a book bearing the same Portuguese title; everything on this DVD is provided with English subtitles, but nothing in the book is translated into any other language. But even though I can’t read the book, this is still one of my favorite DVDs.

(e) The order of the following dozen DVDs is chronological–according to when the film (or earliest film, when more than one is included) was made, not when the DVD was released. 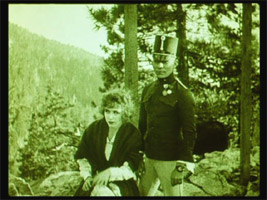 Furthermore, a good many of these shorts are unavailable elsewhere, and I would single out one inclusion — Alain Resnais’ Le Chant du styrene, his first film in CinemaScope, a dazzling color documentary about the manufacture of plastic —- as a priceless gem that will take your breath away. The only drawback here is that the pun-laden commentary, all composed in alexandrines by Raymond Queneau, resists any sort of English translation that can do justice to its brilliance.

Rissient also has some pertinent observations about Mann’s background in theater. From the more recent and excellent Criterion DVD of The Furies, I learned that Mann attended a good many outdoor amphitheater productions of Greek tragedies as a child, and the way he uses his spectacular landscapes as well as violence in Man of the West strongly reflects this influence. It’s also worth noting that Mann’s special flair for off-center framing, which often reminds me of the compositions of Michelangelo Antonioni (a near-contemporary), meshes perfectly with both his talent as a landscape artist and his theatrical training.

This tragic two-hour melodrama follows the struggles of a poor refugee family in Calcutta. Beautifully shot in black-and-white, deep-focus photography, The Cloud-Capped Star often reminds me of Orson Welles’ The Magnificent Ambersons, despite the striking difference in the class being depicted, as another tragic portrayal of the shifting fortunes of a family set against a larger backdrop of a culture in relentless decline, with a great deal of emphasis placed on the sacrifices made by some of the family members, in particular the oldest daughter. No less Wellesian is the way Ghatak’s prodigious soundtrack–often layered between music, dialogue, and sound effects that can be naturalistic (such as the sound of food cooking on a grill) or expressionistic (such as the recurring sound of a cracked whip) — is composed in a kind of counterpoint to its images. In his otherwise sensitive introduction, English critic Derek Malcolm misleadingly speaks of the film’s innovative use of “natural sound,” but it’s important to stress that post-dubbing is as central to Ghatak as it is to Welles — or to Jacques Tati, for that matter. All three filmmakers might be said to compose each of their films twice —- once while shooting and then a second time while recording their soundtracks. And Ghatak is in some ways the most radical of the three in the degree to which his soundtracks “revise” his images. Much as our visual attention shifts in some shots from foreground to background and back again because of the construction of the layered images, our aural attention shifts at times between music, dialogue, and sound effects, which in turn affects the direction of our gaze in relation to those images.

During its six years of existence (2001-2007), the biannual magazine Cinéma was arguably the most irreplaceable as well as the most lavishly illustrated French journal of film history and film criticism, and it included a DVD featuring a major film restoration in each the last ten of its thirteen issues. (Other DVDs in the series featured rare short works by Jean Eustache, John Ford, Kenji Mizoguchi, Luc Moullet, and King Vidor, among others.) The House is Black (though not A Fire) is available with English subtitles in a nonrestored and slightly less complete version from Facets Video, but the French subtitled version included in Cinéma 07 is the best version of the film available anywhere. You can purchase it online HERE, and most of the subsequent issues with DVDs (Cinéma 08 through 014) at the same French Amazon site.

Pièce touchée, working with a fragment from Joseph M. Newman’s 1954 police procedural The Human Jungle for 16 minutes, shows a woman reading in a chair as a door behind her repeatedly opens and closes; a man finally enters and engages in some kind of interaction with her, and Arnold essentially turns the two figures into epileptic dolls with his relentless repetitions and reversals. For 12 minutes, Passage à l’acte takes a few short fragments of a scene from To Kill a Mockingbird, with a father (Gregory Peck) and mother figure, little girl, and little boy sitting at the breakfast table, and loops, inverts, and scrambles them to an even more bizarre effect. But the real unsettler here is the 15-minute Alone. Life Wastes Andy Hardy, which takes various bits from three separate Andy Hardy comedies starring Mickey Rooney, Judy Garland, and others and manages to yield mother-and-son incest, insanity, grief, and death out of them. In Arnold’s archetypal Hollywood small town, lovers kiss repeatedly in a park, then start hissing and emitting ducklike wheezes like geeks. This is a blighted cosmos where Judy sings “alone” first like a melancholy foghorn and then as if someone has just stepped on her foot –- and where a door repeatedly opens and closes as if attacked by some poltergeist until Mickey finally enters in a top hat and tails and gets stuck in a perpetual dance shuffle, caught in an endless loop that makes us realize he’s actually in hell. 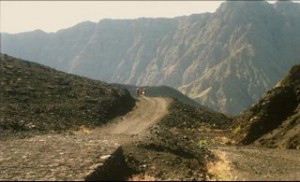 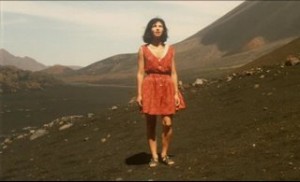