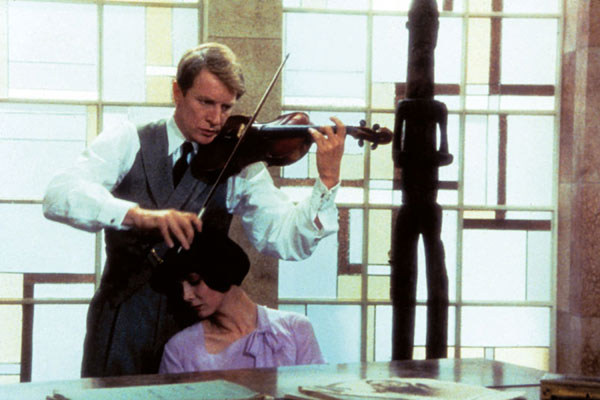 The exquisite art of MÉLO, like the art of Alain Resnais in general, bears a certain resemblance to sculpture: it needs to be seen from several different vantage points if one is to fully appreciate its shapeliness and the powerful multiplicity of its meanings. The following selection of vantage points can’t pretend to be exhaustive; at best, it presents only a few starting points for sounding the bottomless depths of this deceptively simple movie. The first six points are provided by the film’s title and the names listed in the heading above. The last four — theater, mise en scène, symmetry, and mystery — offer more general and abstract perspectives.

1. MÉLO.
The title is an abbreviation for mélodrame or melodrama, which derive from the Greek word melos, music, and the French word drame, drama. What do we usually mean by melodrama? “Sensational dramatic piece with violent appeals to emotions” and “extravagantly theatrical play in which action and plot predominate over characterization” are two relevant dictionary definitions, among others. The earlier meaning is drama with music.… Read more »

The Dreamboat With No Name [THE BRIDGES OF MADISON COUNTY] 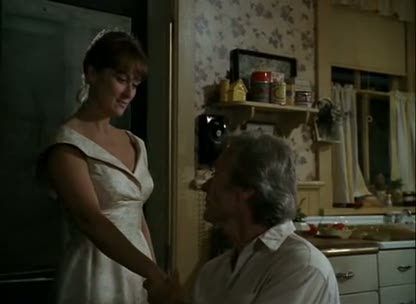 It’s amazing what an Oscar can do. Clint Eastwood’s career as a filmmaker was viewed by many as a cranky, uneven enterprise until he was anointed by the academy for Unforgiven. Now it’s clear that in many quarters he can do no wrong, even though A Perfect World and The Bridges of Madison County show no particular improvement in his work. (For starters, both films are longer than they need to be.) His skill in realizing and giving shape to the scripts of others is sometimes praised so highly it’s as if people thought the movie had emerged full-blown from his Zeus-like head. Whatever the achievements of The Bridges of Madison County (and they aren’t to be sneezed at), there’s a strong temptation to credit Eastwood with resuscitating the star system, the Hollywood tearjerker, and classical mise en scene (as I’ve done in my own capsule review). Yet at best he’s performing yeoman service on a so-so adaptation of a lousy novel, plunking his customary persona in the middle of it as if that were all it needed to achieve greatness.

Let’s face it, the danger of the star system is that it’s predicated to some degree on a blind worship of power; we’re encouraged to rationalize imperfections, slide over contradictions, and go with the oceanic flow.… Read more »