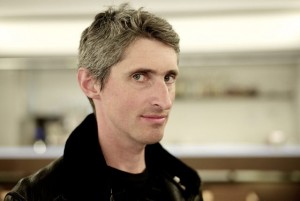 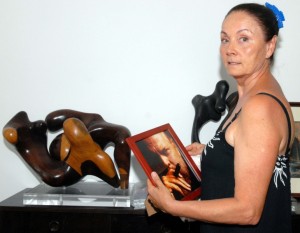 Early last September, the first week of my visit to Croatia was occasioned by Tanja Vrvilo’s ninth annual “Movie Mutations” event in Zagreb, this time devoted to Godard. An illuminating highlight was the visit of Fabrice Aragno, Godard’s cinematographer and all-around technical assistant since Notre Musique. And my last three days in Croatia was a social visit to Oja Kodar at the Villa Welles in Primosten. Kodar was Orson Welles’ muse, companion, and major collaborator over the last two decades of his life, and, I’m proud to say, a valued friend in the three decades since then.

Both Kodar and Aragno qualify as the sort of major collaborators who complicate and even confound the sort of solid auteurist profiles that we usually associate      with both Welles and Godard — profiles that we also paradoxically associate with their uncanny capacities to engage with the creative imaginations of their viewers.  (“I like to think of myself as an airplane, not an airport.” Godard once said to me in   a 1980 interview, implying that the proper destination of one of his films is the spectator and where he or she wants to go, not Godard and his own preferred destination — and the same “open” and interactive principle applies to Welles and his own films.) 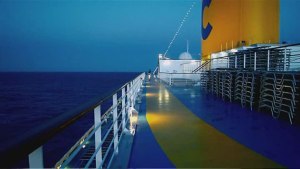 One of the first things that Aragno said to me when I met him in Zagreb was that he doesn’t consider himself a “Godard fan” — his own aesthetic preferences were closer to Antonioni and Kiarostami — but that he loved “working with Jean-Luc”. I also learned that after Godard booked two passages on the cruise ship Costa Concordia for both himself and Aragno for Film Socialisme, he decided not to go himself on the second passage, and instructed Aragno to go alone and either shoot his own material or shoot nothing, depending on his own preferences, but refused to give him any instructions about what he might shoot. And Aragno wound up shooting a good deal of material that Godard used in the film. For Adieu au langage (2014), he  devised the 3-D system that was used with Godard’s input and shot a test reel of 3-D visuals and sound separations (a fascinating document that he screened in Zagreb), and the little boy and girl viewed periodically in the film are his own children.

A filmmaker in his own right (as is Kodar), Aragno has made at least eight films. The two that I’ve seen, Quod Erat Demonstratum (2012) and L’invisible (2013), are both largely concerned with Godard material — the first is a portrait of Godard for Swiss television in which Aragno is credited for the direction, Godard for the “scenario”; the second is a compilation of found footage featuring Lake Geneva; both feature outtakes as well as extracts from diverse films by Godard that are edited in a somewhat unGodardian fashion. 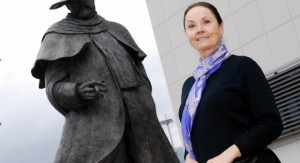 Kodar’s three films as director or codirector, even less well known, are Jaded (an American exploitation film, 1989), Vrijeme za… (a Croatian-Italian  docudrama about the Serbo-Croatian war, 1993), and Orson Welles: The One-Man Band (a documentary codirected by Vassili  Silovic, 1995). Because she originally wanted to be the sole director of the latter (which is featured as an extra on various Welles DVDs), I asked her at one point in Primosten if she still considered it “her” film, and she pointed out that apart from the portions she directed herself, the other portions in which she was interviewed at length effectively put her in charge. More famously, she cowrote both F for Fake and The Other Side of the Wind, each of which incorporates stories she wrote independently of Welles, costars in both, and gave both films its titles.

The challenge offered by Kodar and Aragno to auteur-based film criticism is the healthy reminder that reading strategies and writing strategies are never the same. I recall Terry Gilliam saying (in Sodankyla, Finland in 1998) that he was constantly surrounded by people proposing various “typical Gilliam touches” when he was more attracted to ideas that escaped such categorization, and Welles once said that he deliberately avoided “typical Welles shots” in F for Fake. But old critical habits die hard. 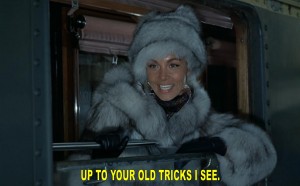