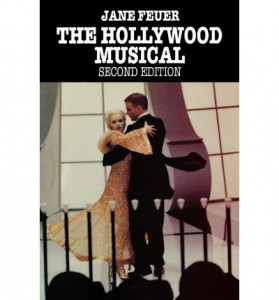 Since the advent of Pauline Kael and the anti-intellectual approach to popular genres that she has successfully championed, serious writing about the Hollywood musical that wishes to offer anything more than consumer tips, stray bit of gossip or trivial local evaluations —  all useful enough services in their own right – has often had to remain doggedly academic in order to be recognized at all. Yet it is one of the rare virtues of Jane Feuer’s long-awaited The Hollywood Musical that, contrary to the ideological assumptions of the Kaelians and neo-Kaelians, it manages to be rigorously analytical and loads of fun at the same time. And thanks to Feuer’s witty style, the intellectual vantage point and the sense of play, far from seeming in any respect contradictory or inappropriate to its subject, work together to mutual advantage –- creating, like the musical itself, a high concentration of energy and grace under pressure.

Rick Altman’s excellent BFI Reader on the musical, which I reviewed in these pages last year, gave more than one foretaste of this possibility.… Read more »

SPRINGTIME IN A SMALL TOWN: A Reinvented Remake

From The Guardian (June 6, 2003). Happily,  Fei Mu’s 1948 masterpiece is now available on a decent DVD with English subtitles from the BFI, and I’ve recently written a lengthy essay about it for the final issue of the French quarterrly Trafic, to be published in French this fall and on this site in English around the sane time..– J.R. 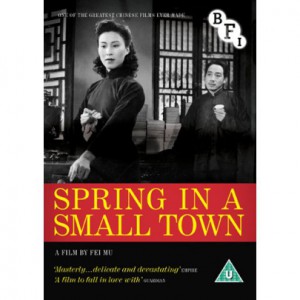 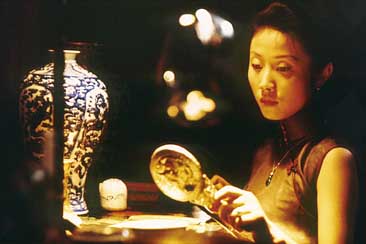 If I had to pinpoint what makes so much of contemporary life intolerable, something I’d call remake mentality might head the top of the list. The mindset that dictates that anything new has to be a recycling of something familiar — that old markets be exhausted before any new ones are contemplated, and that viewers be regarded as mindless brats demanding only more of the same — is so common by now that it has become fully internalised, and not only within the film industry.

The fact that we’re supposed to be looking forward to two sequels to The Matrix in the same year implies that we are fixed marketing units, programmed to relish staying in our well-appointed ruts. But there are just as many spinoffs predicated on our ignorance of the originals, suggesting that the avoidance of fresh thinking may not simply be our own.… Read more »

Figuring Out DAY OF WRATH

The following, a revision and substantial expansion of liner notes that I wrote for the Criterion DVD of Day of Wrath several years ago, was written for the Australian DVD, which came out in 2008  on the Madman label — as did my essay on Ordet. (One can order DVDs from Madman’s site, and by now they have quite a collection.) My thanks to Alexander Strang for giving me permission to reprint this. — J.R.

Figuring Out Day of Wrath by Jonathan Rosenbaum 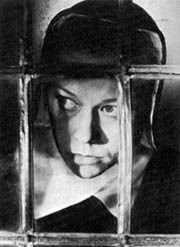 I first encountered Carl Dreyer’s work in my teens, but it wasn’t until my 40s that I started to be ready for it. I mainly had to rely on lousy 16-millimeter prints, so ruinous to the sounds and images of Day of Wrath that I could look at that film only as a form of painterly academicism, a repressed view of repression. The film defeated me with its unalleviated Danish gloom and its dull pacing, which I associated with Dreyer’s strict Lutheran upbringing. Most of this was sheer nonsense, as I discovered once I had access to better prints, information, and reflexes. For one thing, contrary to many would-be reference works, Dreyer’s upbringing was neither strict nor Lutheran, and he was born a Swede, even if he grew up in Denmark.… Read more »