Vietnam Under Glass [THE SCENT OF GREEN PAPAYA] 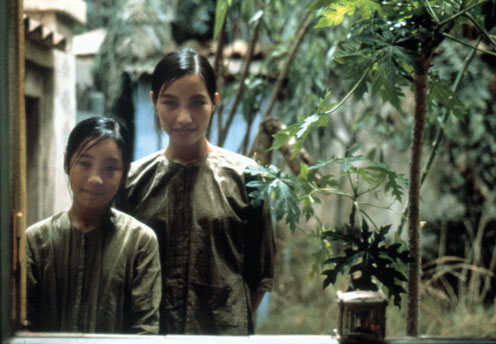 *** THE SCENT OF GREEN PAPAYA 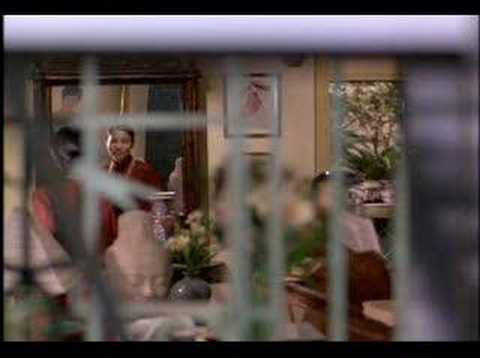 Until fairly recently, films from the Chinese- and Vietnamese-speaking world have had next to no distribution here; so it’s worth noting that three such movies have been nominated for the foreign-language Oscar: Farewell My Concubine from Hong Kong, The Wedding Banquet from Taiwan, and The Scent of Green Papaya from Vietnam. The first two of these have already opened in Chicago, and the third — in some ways my favorite in the bunch — is starting a run this week at the Fine Arts. What overlapping interests — economic, cultural, artistic, ideological — are being served by this sudden upsurge in attention?

Interestingly enough, none of these Oscar nominees qualifies purely and unambiguously as a movie representing the country officially attached to it. Though Farewell My Concubine was produced in Hong Kong, all its action takes place in mainland China, and it was directed by a celebrated “Fifth Generation” filmmaker, Chen Kaige. The Wedding Banquet, a Taiwanese-American coproduction, has a Taiwanese director, Ang Lee, but it’s set in New York City and much of its dialogue is in English. The French-Vietnamese coproduction The Scent of Green Papaya is set in Saigon, but for budgetary reasons it was filmed in a studio in a Paris suburb. 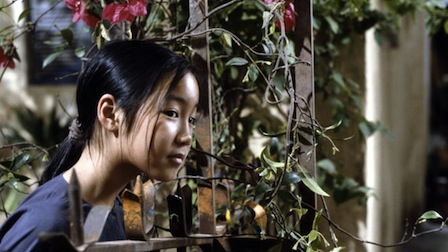 To what extent is mainstream status something legitimately recognized by distributors and academies (including the Academy of Motion Picture Arts and Sciences), and to what extent is it something created by promotion, including press coverage? If films from China, Taiwan, and Vietnam are no longer deemed marginal to public interest, films from Africa continue to be regarded that way. This is not an aesthetic judgment arrived at by critics, but an economic judgment made by distributors — though one finds it reflected in the discourse of most mainstream critics as if it represented their own aesthetic judgment: China’s hot, Africa’s not. It’s worth adding that Farewell My Concubine and The Wedding Banquet are both concerned in part with homosexuality, a topical subject in the U.S. Does this mean that if masterful African filmmakers like Souleymane Cisse, Djibril Diop Mambety, and Ousmane Sembene — none of whose work is commercially available here even on video — made films that were comparably topical, they might become Oscar-ready as well?

I’m not trying to argue that Farewell My Concubine, The Wedding Banquet, and The Scent of Green Papaya don’t deserve their pre-eminence; all three are cuts above the usual cornball foreign-language Oscar nominees. (If The Wedding Banquet doesn’t come within light years of the best work of Taiwanese directors like Hou Hsiao-hsien and Edward Yang, it’s still pretty entertaining.) But considering everything that doesn’t become visible over here, it’s worth wondering a little about what makes The Scent of Green Papaya, as a Vietnamese film, specifically worthy of our attention. Unlike Robert Kramer’s powerful recent documentary Starting Place, which has had little or no visibility in this country, or Oliver Stone’s Heaven and Earth, this film has nothing to say about U.S. intervention in Vietnam, and that may contribute to its appeal: it doesn’t confront us with any reminders of the over two million Vietnamese (and 58,000 American) corpses associated with our involvement there.

Writer-director Tran Anh Hung, whose first feature this is, indirectly makes the same point himself when he says, “In The Scent of Green Papaya, I wanted to show the regular life of the Vietnamese people. I wanted to show their humanity, which hasn’t been seen yet at the movies.” He also notes that the film “was born from the images I have of my mother, the freshness and the beauty of my mother’s gestures.” His next feature, Cyclo, about a young bicycle-taxi driver, which he plans to shoot on location in Ho Chi Minh City, will be based on recollections of his father. 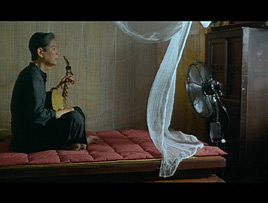 The Scent of Green Papaya redefines what we usually mean by “inside” and “outside” from first moment to last, architecturally as well as socially and psychologically. The slender story takes place in two separate Saigon households ten years apart, 1951 and 1961. It registers more in some ways as two separate movies than as a movie in two parts. The first part is superior to the second, though the central protagonist — a servant girl age 10 and 20 — and the main characteristics of the camera style (complex, choreographed arabesques plotted in relation to her daily rounds and routines) are the same in both.

The servant, who arrives from a village in the opening shot, is named Mui, which I’m told is a Vietnamese word meaning “scent”; this would make the film’s title in Vietnamese a sort of pun. (The title relates to Mui’s fascination with the seeds she finds inside a papaya after slicing off the pulp.) We learn that her father is dead but her mother and sister still live in the village she has left, and that she’ll be allowed to visit them after three months in Saigon. (In the film’s second part her mother and sister aren’t mentioned at all.) 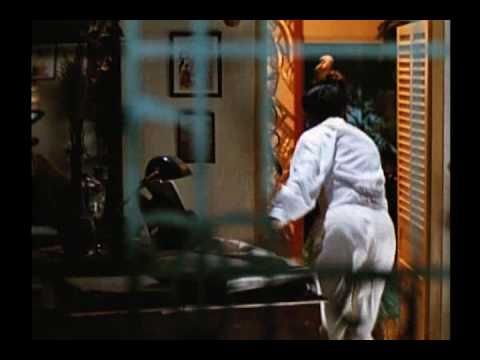 The mother of the middle-class household into which young Mui moves runs a fabric shop a few yards away, and we get frequent looks at both the shop and the short stretch of neighborhood between the shop and the two-story house. Because all the cooking and washing is done outdoors and many of the rooms are open (via windows and doors) to the outside, the distinction here between “interior” and “exterior” is particularly ambiguous. Thanks to the fluidly tracking and craning camera movements, the proximity of inside to outside and of house to shop is frequently spelled out within extended takes. 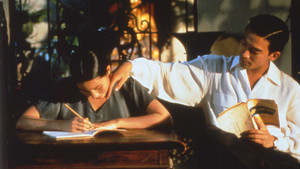 The second section finds Mui working inside an upper-class, single-story house belonging to a young composer named Khuyen — a friend of the oldest son in her previous household. We get no sense at all of a surrounding neighborhood and very little of the house’s exterior; for all practical purposes, what happens in the house’s interior is all that counts. The social implications of this — of money shutting out the exterior world — are never expressed directly in the dialogue but can be read as an ongoing subtext of the mise en scéne; and the Europeanized elements in the composer’s house and environment — ranging from the Chopin and Debussy he plays on his piano to the appearance and behavior of his fiancée — are clearly a function of this wealth.

The only indications of war that we get in the film are the occasional sirens and overhead planes, and if memory serves these are heard mainly in the first section, set in 1951. Significantly, in an interview given to the French newspaper Liberation, Tran cited as his most formative early film experience Robert Bresson’s masterpiece A Man Escaped (1956), an account of a real-life escape from a Lyon prison during World War II in which the world outside the prison is represented exclusively by offscreen sounds.

The first section of Tran’s film is largely devoted to Mui’s awed discovery of the natural world — such as the plants, lizards, and insects of her new environment — to her learning how to cook and perform her other household duties, and to her gradual integration into the life of a rather dysfunctional family. (The father periodically runs off with the money made at the fabric store and apparently spends it on prostitutes and gambling, while the grandmother remains on the second floor in perpetual mourning for a granddaughter who would have been Mui’s age. The youngest of the three sons, who clearly regards Mui as an intruder, makes “territorial” statements by farting and urinating in her presence, and the second youngest tortures insects with candle wax.)

The second section charts Mui’s no less awed discovery of sex and culture, both at the hands of her well-to-do employer, who teaches her to read and write after becoming sexually involved with her (thus precipitating the angry departure of his fiancée). 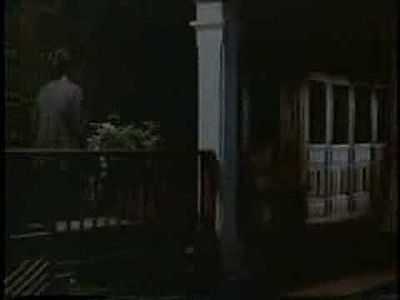 It’s possible to read a discreet and subtly ironic fable here about the subjugation of Vietnamese women, colonized first by housework, then by eros and a culture that is shown as largely Europeanized. One could go even further and read a certain, perhaps unconscious allegory about the voluntary colonizing of a Vietnamese male director at the hands of a French male producer. But if such a tale is being told, the irony is so faint that it can be read only with difficulty. Mui at 20 — played by Tran Nu Yen-khe, identified in the film’s press materials as “Tran’s girlfriend and creative partner” — has a silly smile perpetually glued to her face that makes her crush on Khuyen, her attraction to his wealth, and her fascination with certain objects associated with him (such as his black shoes and his fiancée’s clothes and lipstick, all of which she tries on) seem like interchangeable emotions. The movie does nothing to “place” this ambiguity either critically or analytically.

Again in the press materials, Tran contrasts the mutual seduction of Mui and Khuyen with what he calls seduction American style, where “a man and a woman meet and immediately there is a power struggle.” Here, he contends, “Two Asiatics who are attracted to each other brush up against each other, avoid each other, create chance encounters where they’ll have the opportunity to meet again until, little by little, they become indispensable to each other. Slowly, always very slowly.” But the absence of any overt power struggle doesn’t mean that power plays no role in the seduction, and a certain romanticizing of traditional sexist roles seems central to this episode. 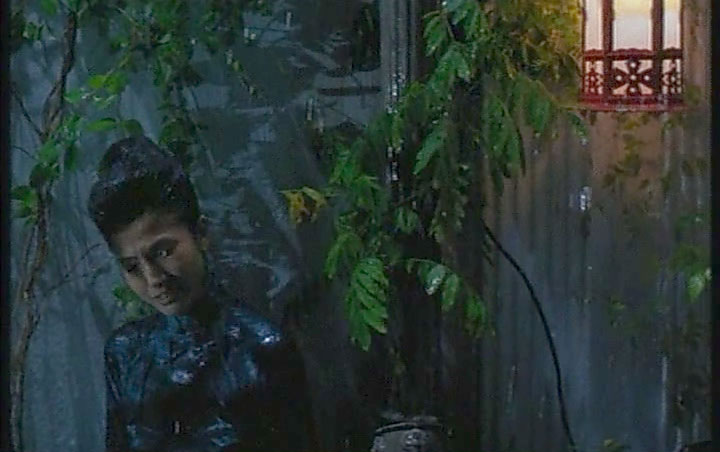 Tran, who was born in Vietnam in 1962 — a year after the film’s second section takes place — and moved with his family to Paris in 1975, seems to be working out an allegory about personal origins here, but how deeply this has any bearing on Westernization is less than clear. On one hand, it’s refreshing to see a third-world feature characterized more by studio mise en scene than by pseudodocumentary techniques — and closer in its formal pleasures to Max Ophuls or Ernst Lubitsch (in its principles of camera movement and camera placement) than to Satyajit Ray or Yasujiro Ozu. On the other hand, the beautifully realized studio shooting serves in some respects to increase the touristic exoticism of a movie about Vietnam — to place it under glass as a delectable consumer object. (I’m told that when Los Angeles’s American Cinematheque recently showed the movie as part of a fund-raising benefit, they offered a Vietnamese meal with the same dishes displayed in the movie as part of the package. Did that include, I wonder, a too-salty sweet-and-sour pork? In the movie it was made too salty because of a shortage of rice, thereby provoking a small domestic crisis.)

The concentration on housework in the movie’s first section — a neglected film subject apart from experimental movies like Chantal Akerman’s Jeanne Dielman — is equally refreshing, and Tran’s elliptical handling of narrative and incident, combined with his highly selective uses of sound, shows him to be a talented pupil of Bresson. As for what any of this has to do with Vietnam, I’d much rather wait and hear from Vietnamese spectators — assuming that any of them want to speak and that any part of the U.S. media cares to listen. 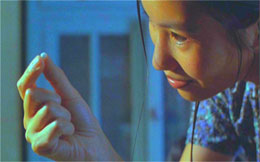