I’ve always been somewhat skeptical about Herzog’s reputation and constructed myth as a mad genius. Here are my capsule reviews for the Chicago Reader of  Lessons of Darkness (1992) and My Best Fiend (1999), respectively (on other occasions, I’ve sometimes been more supportive of his work):

In his characteristically dreamy Young Werther fashion, Werner Herzog generates a lot of bombastic and beautiful documentary footage out of the post-Gulf war oil fires and other forms of devastation in Kuwait, gilds his own high-flown rhetoric by falsely ascribing it to Pascal, and in general treats war as abstractly as CNN, but with classical music on the soundtrack to make sure we know it’s art. This 1992 documentary may be the closest contemporary equivalent to Riefenstahl’s Triumph of the Will, both aesthetically and morally; I found it disgusting, but if you’re able to forget about humanity as readily as Herzog there are loads of pretty pictures to contemplate. 54 min.

Werner Herzog’s surprisingly slim and relatively impersonal 1999 feature charts his relationship with the mad actor Klaus Kinski on the five features they made together. Though Herzog has plenty to say about Kinski’s tantrums on the Peru locations of Aguirre: The Wrath of God and Fitzcarraldo and even interviews other witnesses on the same subject, he says next to nothing about his own involvement — such as why he hired Kinski in the first place or how the overreaching heroes Kinski played for Herzog were clearly modeled after the director, metaphorically speaking. Like many other Herzog features, this carries a certain morbid fascination but provides little edification; Kinski’s extensive career apart from Herzog is barely acknowledged. 95 min. — J.R. 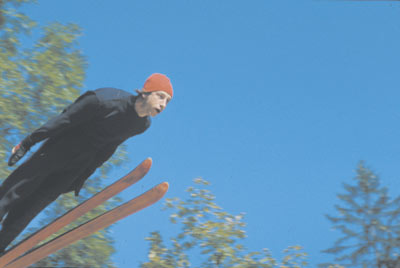 After a ski-jump by Walter Steiner is shown in slow-motion, Steiner explains his conception of one of his own wooden sculptures.Two of his falls while jumping are shown, in slow-motion and stop motion respectively; another skier jumps and describes some of the dangers of the sport. Werner Herzog explains the circumstances of Steiner’s latter jump and the shooting of the present film, which began in autumn 1973 when the Swiss team was training at Bad Ausee, Austria, and Herzog saw Steiner jump 179 metres — ten metres more than the previous world record and ten metres short of what would have been certain death. On the 15th of March at the giant ramp in Planica, Yugoslavia, Herzog observes Steiner in training, where he jumps 169 metres. After Steiner has a bad fall, Herzog learns by walkie-talkie that he hurt his side, but not seriously, and beat the world record by 8 metres; still stunned, Steiner is interviewed in his dressing-room. After a walk in the woods, he makes a third jump of 166 metres, beating the ramp record and landing successfully. The official competition begins the next day, and Steiner starts one section lower than the other jumpers; Herzog describes his 166-metre flight the following day as the most perfect ever recorded. Steiner speaks about a pet raven he raised which he eventually shot after it moulted badly, was unable to fly, and was attacked by other ravens. He ends by declaring that he’d like to be all alone in the world; if he were, he wouldn’t be afraid. 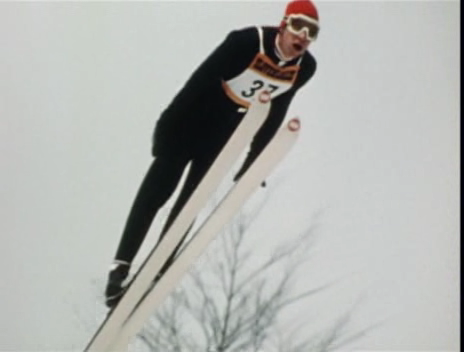 Despite such ravishing and apparently ‘pure’ achievements as the beginning and ending of Aguirre, Wrath of God and the beautiful slow-motion ski-jumps in The Great Ecstasy of Woodcarver Steiner, the present vogue for Werner Herzog as a ‘visionary’ artist is in some respects a curious phenomenon. Acclaimed for the strangeness of his various depictions and/or expressions of ‘madness’ and ‘obsession’, he is a director who approaches these topics with an abandon that invariably seems checked by his manner of presenting them. Perhaps because the transparency of his language is itself so mundane that any amount of ‘crazed’ material can pass through this medium without threatening the spectator’s safe, voyeuristic distance from it, he has managed to reconcile the seemingly irreconcilable realms of ‘humanism’ and self-centered fanaticism without ever forcing the contradictions between these positions into an audience’s consciousness. In contrast to a supposed failure of expression like Hawks’s Red Line 7000, which exploits the death-defying nihilism of car racers in such a way that it directly implicates the viewer in its temptations and absurdities, the ‘weirdness’ of Walter Steiner — like that of Kaspar Hauser or Aguirre — is successfully presented as that of an exotic zoo animal, encouraging sympathy without permitting empathy or any other sort of direct identification. “I’ll have to break my skull before they’ll believe me”, Steiner declares at one point, “…but probably they won’t listen until I give up”; and Herzog later quotes his remark, “50,000 people waiting to see me crash”. it is an implicit aspect of the director’s method that “they” in the first statement, and “people” in the second, are not allowed to rebound openly on the film’s audience. The fascination inherent in observing ‘deranged’ individuals has, of course, a long and venerable tradition behind it, much of which has little to do with art, visionary or otherwise. The curious aspect of Herzog’s work is that it focuses this fascination in such a way that the director himself is seen as an exotic creature — a sort of holy fool who somehow ‘finds’ his strangeness rather than constructs it — and the view is invited to ‘gaze over his shoulder’ at the results. Thus the true subject of this otherwise unexceptional documentary, the real object of its spectacle, is not simply Steiner himself but also the director’s own interest in him; and both, in turn, are presented as a kind of sensationalism — an exhibit of ‘content’ rather than a particular form of address. Unlike the tactics of Tod Browning’s Freaks, such a method cannot afford to confront an audience with its own morbidity. With the director himself on hand as a convenient surrogate, the spectator can emerge from the experience as spotless as a lamb, and the ‘fact’ of Steiner — like the fiction of Aguirre or the semi-fact of Hauser (characters who figure equally as stand-ins for the director) — merely becomes another source of romantic mystification about what the filmmaker is actually doing. 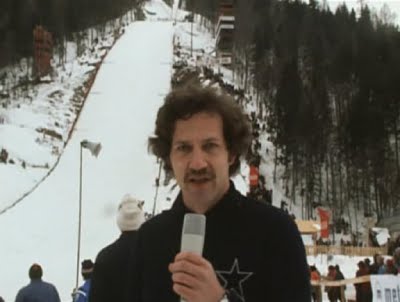