The Audience is Us (THE TRUMAN SHOW) 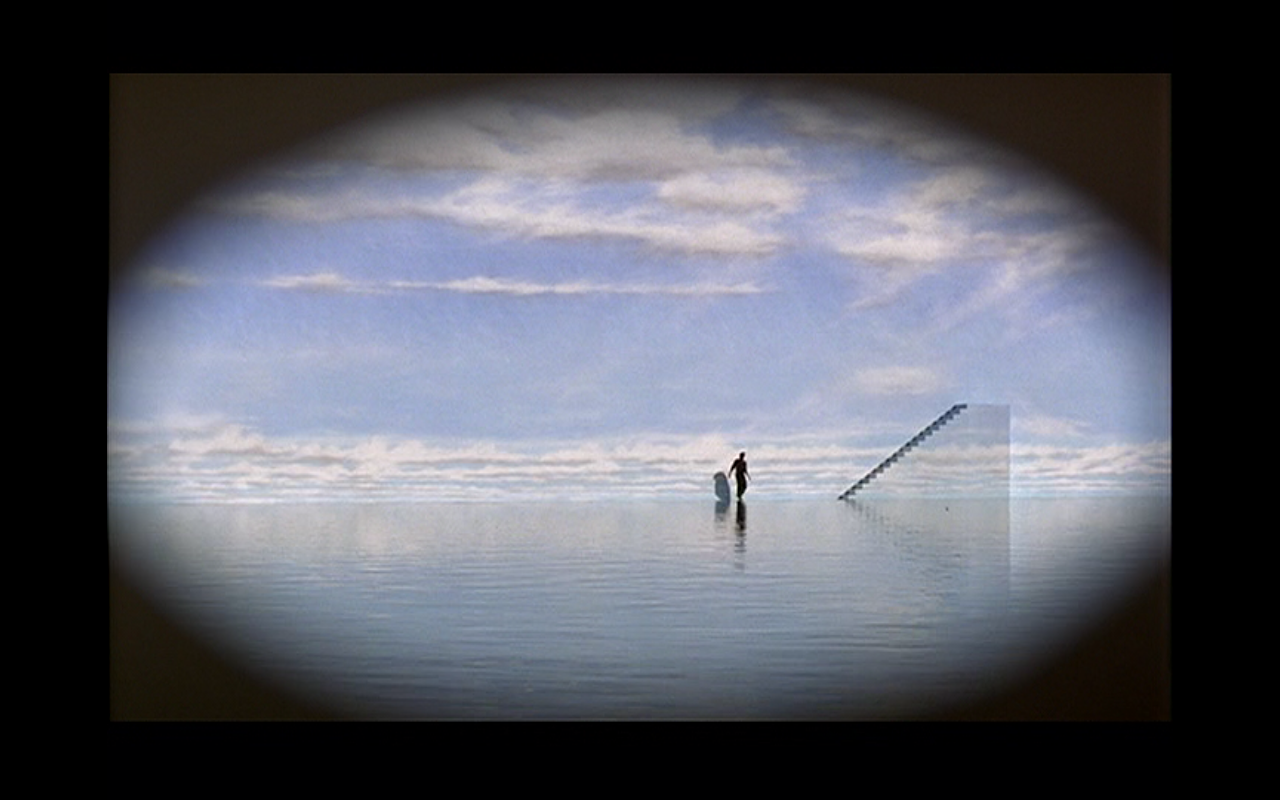 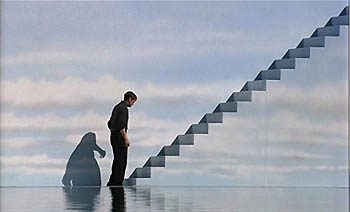 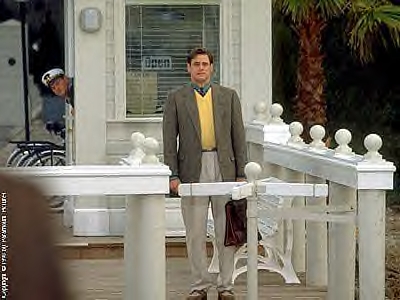 Undeniably provocative and reasonably entertaining, The Truman Show is one of those high-concept movies whose concept is both clever and dumb. Let’s start with the clever part. A 29-year-old insurance salesman named Truman Burbank (Jim Carrey), who lives in a seemingly utopian small town named Seahaven on an island off the coast of somewhere like Florida or California, gradually discovers that he’s the unwitting star of a TV show — a show that’s been running 24 hours a day since his birth. Everyone else on the island is an actor or an extra — including his wife Meryl (Laura Linney), his best friend Marlon (Noah Emmerich), and his mother (Holland Taylor) — and 5,000 hidden cameras are planted all over town to record his every movement. The show has no commercials in the usual sense, subsisting instead on product placements accompanied by advertising patter from Seahaven residents, including Truman’s wife, who extols the virtues of a new gadget she bought at the supermarket or recommends that he try a new brand of cocoa. It turns out that Seahaven is actually a huge TV studio, monitored from a lofty control room by the show’s creator, Christof (Ed Harris), who commands the cameras and cues the actors’ dialogue. 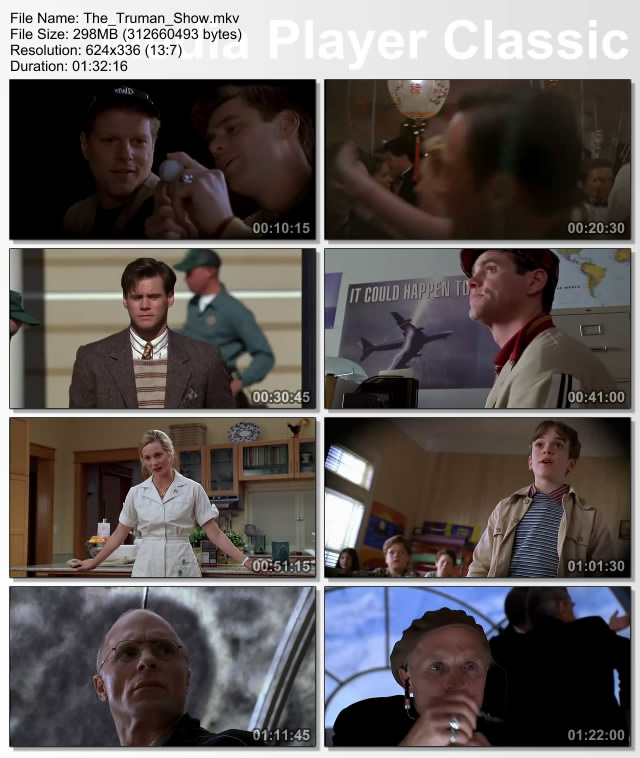 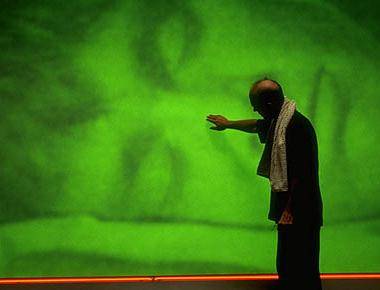 So far so good, I suppose. But this cleverness starts to look dumb as soon as one tries to imagine the concept stretched any further than the movie stretches it. If for the past three decades millions of viewers across the globe have been following Truman’s life with some regularity — presumably taking time off to live their own lives — how many of them have stayed tuned to his dark bedroom during the hours he sleeps every night? (There’s a bit of dialogue to suggest that it’s hard to see much of his sex life in the darkness, but what about the rest of his time in bed?) We know there’s a camera planted behind his bathroom mirror at home, but do viewers get to see him whenever he takes a piss or a crap? And if not, what does the camera focus on in the meantime?

Given the number of undramatic moments that fill Truman’s daily life — moments when, like all of us, he’s simply eating or reading or watching TV or doing routine work at the office or routine chores at home — are we supposed to believe that millions of spectators, a few of whom we see at regular intervals, are taking all this in? Or are they watching merely occasional random slices of Truman’s mainly humdrum existence? And if the latter, how do they know when the good bits will happen? 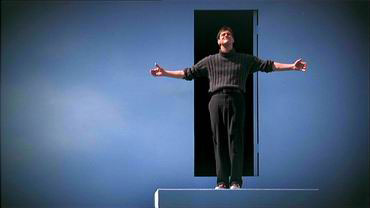 In other words, the concept starts to fall apart as soon as you stop to think about it — just as Truman’s 29-year fantasy that he’s living in the real world starts to fall apart as soon as he stops to think about it. However, if you decide to see this movie as an allegory rather than as an SF construction — and the respectful tone of many reviewers suggests that this is precisely how they see it, even if they don’t say so –then you might choose to overlook the flimsiness of the plot. After all, if The Truman Show is saying something about the phoniness of our lives and our culture — especially since few Hollywood movies ever broach such a topic — isn’t that reason enough to go along with the premise?

To some extent, I suppose it is. But what are screenwriter Andrew Niccol and director Peter Weir actually saying? If they’re implying that TV and life are becoming interchangeable, perhaps poetic license allows them to convert that implication into a shaky plot premise. If they’re commenting on the TV audience’s insatiable hunger for material about a handful of real-life individuals such as O.J. Simpson, maybe that grants them extra license. And if they’re also suggesting that both of the above yield a TV show that comprises all of the culture we’ve got, then maybe it’s time to hand them a cigar.

But I have my doubts, because this conceit is predicated on the assumption that the TV audience is a pack of blithering idiots — everyone, that is, except you and me and a few other media-savvy commentators. Far from being a visionary or original notion, this is one of the root assumptions of our mass culture. And if we’re all living inside the same bad TV show, what else could The Truman Show be saying? It’s merely confirming the message. 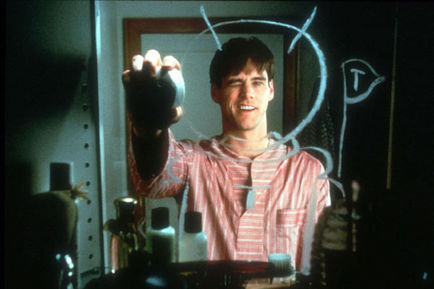 Some reviewers have cited Paul Bartel’s 60s short film The Secret Cinema as a precedent. But the first half of The Truman Show reminded me of Robert Heinlein’s 1941 story “They” (about a patient in an asylum who believes — correctly, as it turns out — that everything that happens in the world is staged for his benefit), and the second half echoed Frederik Pohl’s 1954 story “The Tunnel Under the World” (in which the hero discovers that the town he’s been living in is a controlled site for testing ads, located on a tabletop). Heinlein’s story is a distilled paranoid fantasy, Pohl’s a satire. And it’s clear that Niccol’s script for The Truman Show is adroitly playing in both registers — educating the viewer along with Truman in the paranoid scenario, while setting up a satire of sunny TV depictions of the “good life” until the two projects eventually come together. 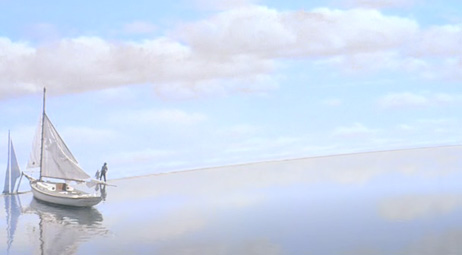 In the May issue of Esquire, critic David Thomson had some interesting things to say about the “aura of bright light” in Seahaven and all that it signifies in relation to “our dependence on and loathing of TV — as if TV had become the base level of visible existence.” Linking this sort of “butterscotch” lighting to images in Blue Velvet, Fargo, Raising Arizona, Trainspotting, My Life in Pink, and The Shining, among other movies, and contrasting its implications and those of film noir, he was moved to hail The Truman Show as “one of the most startlingly original American movies in years, enough to give one faith in the salutary and inspiring nearness of the new millennium.” His giddiness inspired some Esquire editor to proclaim the film “The Movie of the Decade” on the cover — and ads have been spreading this overkill everywhere. 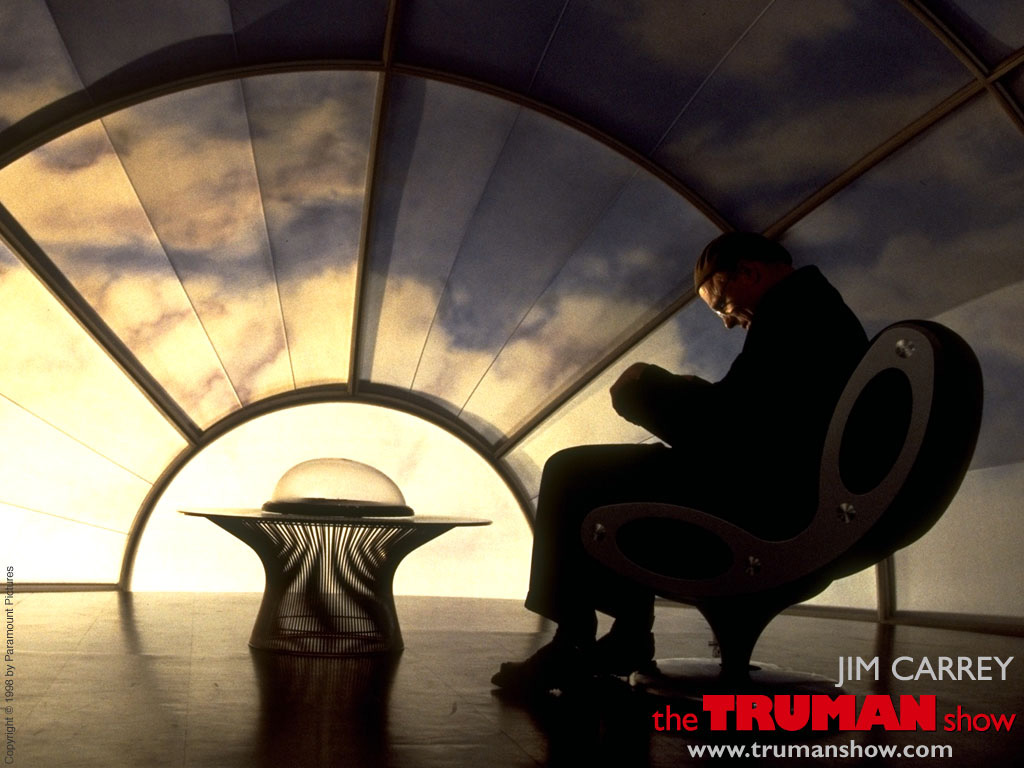 A logical conclusion, if you agree with Thomson and Esquire and this movie, is that our cultural options really are as threadbare as mass culture keeps saying they are — because we’re all blithering idiots. (The circular reasoning is always part of the message.) Around the same time that issue of Esquire appeared, the editorial that launched the New Yorker‘s “Special Europe Issue” began as follows: “Europe, as any self-respecting American businessman will tell you, is history: a quaint place for a vacation (if you don’t mind a room without a shower), appetizing food (if you avoid Ireland), and the odd interesting little movie (if subtitles don’t bother you) — but that’s about it.” You might stop to wonder about all the European hotel rooms with showers, what the swipe at Irish food is supposed to mean, and why those “odd interesting little” movies in Europe — the few not being crowded off the screens by Hollywood fare — are presumed to be subtitled even when the film’s shown in its native country. But the editorial writer isn’t saying that he necessarily believes any of this nonsense — only that “any self-respecting American businessman” does. (Presumably businessmen without self-respect and businesswomen of diverse persuasions are better off.) This same sort of underlying contempt for the American public can be found in most places where cultural decisions are being made. It’s the standard media position right now: don’t blame yourself or your editor or producer or agent or studio or network; blame the audience, which is supposedly calling all the shots. By this reasoning, Christof is a holy seer, and his flock consists of a planet full of jerks. It’s a characteristic form of contemporary doublethink: the public is disparaged for enjoying stupidity, and the media-savvy instigator of that stupidity is declared a genius. 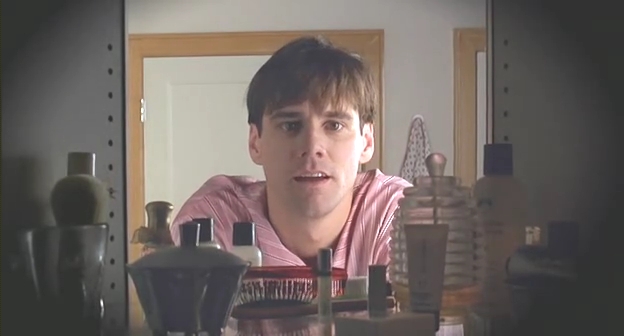 What do we see of the TV audience in The Truman Show? A couple of waitresses at a bar surrounded by customers; a couple of old ladies on a sofa with a Truman sampler cushion, grotesque creatures who (it’s suggested) might be lesbians; a geek splashing around in a bathtub; a few Japanese spectators gawking and gesticulating; a few members of Christof’s crew; Christof himself. They’re supposed to represent us, the real world, not the artificial and phony world of Seahaven. But apart from the film’s bland gestures of affection toward the waitresses and the preternatural awe it expresses for Christof, it’s a world plainly unworthy of redemption.

There’s reason to applaud Jim Carrey’s determination to move beyond his rubber-faced antics and consider the nature of his own medium, especially since he was slapped down for presuming to do that in The Cable Guy. The inhospitable reception reviewers gave that movie and Tim Burton’s similarly subversive Mars Attacks! — even reviewers who were less than enthusiastic about Ace Ventura and Batman — suggests that cleverness that refuses to honor the power of the tastemakers shouldn’t expect a warm welcome. The Truman Show, by expressing the proper amount of contempt for its own audience and dishing up a fully anointed Christof to flatter the self-image of reviewers, doesn’t have to worry on that score; its cultural status is made. 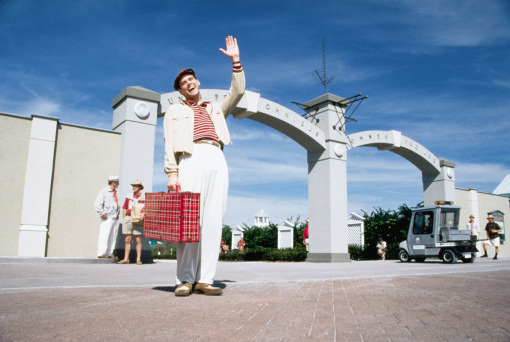