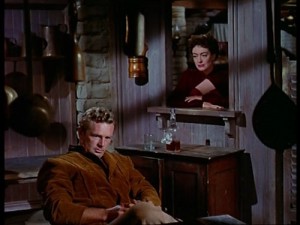 François Truffaut called it the Beauty and the Beast of Westerns, without saying who was the beauty and who was the beast. (One could find many candidates for either role). And Jean-Luc Godard, in his second feature, Le Petit Soldat, offered a spin on the movie’s most celebrated dialogue exchange, before offering explicit references to Johnny Guitar in several other films he made in the 60s:

Vienna (Joan Crawford): Sure. What would you like to hear?

Johnny: Lie to me, tell me that all these years you’ve waited, tell me.

Vienna: All these years I’ve waited.

Johnny: Tell me you’d have died if I hadn’t come back.

Vienna: I would have died if you hadn’t come back.

Johnny: Tell me you still love me like I love you.

Vienna: I still love you like you love me.

Johnny (softly and sarcastically, about to down another shot of whisky):

Véronica (Anna Karina): I’m not sad that you’re leaving. I’m not in love

with you. I won’t join you in Brazil. I don’t kiss you tenderly. 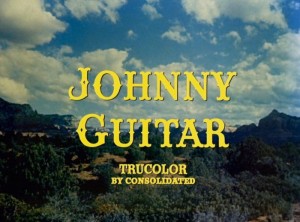 Back in 1954, I was lucky enough to see Johnny Guitar on a big screen, during its first run, at age eleven, and it was already clear to me that this movie was something special. When a wounded teenage gunslinger named Turkey (Ben Cooper) was forced by an angry mob to betray his only friend, Vienna, with a lie in order to save his life but then was lynched anyway, I couldn’t yet read this outrage as a conscious reference to the contemporaneous horrors of the Hollywood witch hunt. But the scene, as shocking as it was, nevertheless felt real and authentic in its awful immediacy, and that was only one of the many shocks that the film had to offer. This is a film, after all, that literally opens with an explosion, and one where even the rolling of a shot glass across a bar counter is made to seem almost cataclysmic. So even if, as I would learn much later, Joan Crawford, Sterling Hayden, and the movie’s director, Nicholas Ray, all initially regarded Johnny Guitar with distaste and disdain, for reasons that I’ll get to shortly, this certainly wasn’t the way that I and thousands of other filmgoers thought and felt about this movie at the time; it was even a hit. Many of the original reviewers were dismissive — especially in the trade press, where the giddy style of it all made them regard it as something like a bad joke — but this only goes to show how unreliable such reviews can be. 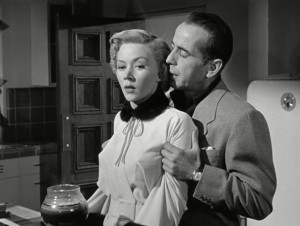 Later on, Johnny Guitar became known as one of the first “adult” Westerns, along with such equally Freudian productions as Pursued (1947) and The Furies (1950), which seems just in some respects. Nicholas Ray was one of the first Hollywood directors of the period who could somehow convey to audiences that his romantic couples actually had sex together — Dixon Steele (Humphrey Bogart) and Laurel Gray (Gloria Graham) in In a Lonely Place (1950), Johnny Logan aka Johnny Guitar and Vienna (not to mention The Dancing Kid [Scott Brady] and Vienna) — even though their relationships remain troubled and unstable. The sexual reunion of Vienna and Johnny is even highlighted by the ironic reprise of Johnny’s line that all a man needs is a cup of coffee and a cigarette by Old Tom (John Carradine).

Yet it’s indeed the troubled relation these characters have to their assigned gender roles, the sense that these are constantly on the verge of slipping out of gear, that makes Johnny, The Dancing Kid, Turkey, Vienna, and even the latter’s major adversary, Emma (Mercedes McCambridge), seem so contemporary in their common neuroses. “Westerns may be an essentially masculine genre,” critic Imogen Sara Smith has aptly pointed out,  “but Ray’s androgynous, operatic film reveals the flamboyance and feverish anxiety ingrained in that anxiety.” Even the supposedly peaceable and affable Johnny Guitar turns out to be “gun crazy” or trigger-happy when Turkey starts shooting up the saloon, as volatile as Dixon Steele was. 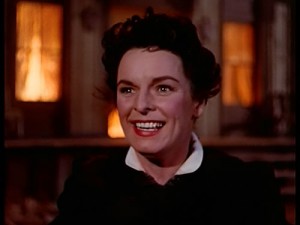 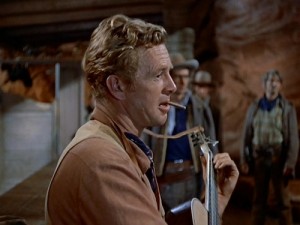 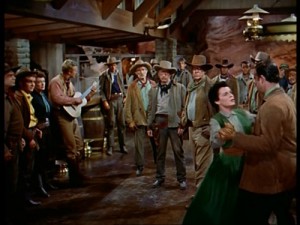 All these characters operate according to the existential postulate that you are what you do and vice versa — and that what you do is most of all what other people see you doing. (“What’s going on with you two?” The Dancing Kid asks Vienna and Johnny, and the latter responds, “Just what you see, friend.”) Thus Johnny proves his identity by strumming his guitar, and The Dancing Kid establishes his credentials by taking Emma for an impromptu turn across the floor of Vienna’s saloon, while the masculine credentials of both men, and Turkey and Bart (Ernest Borgnine) to boot, have to be further tested with various dares, taunts, and acts of bravado. Even more confusingly, Vienna’s shifting status as boss, lover, mother, desperado, or peacemaker has to be continually proven and reproven, sometimes with costume changes to match the various shifts. She first appears in trousers, but when she later comes back downstairs to engage in the dialogue with Johnny quoted above, supposedly because she can’t sleep, she’s improbably wearing an evening dress, as if to contradict her claim that her sexual and romantic interest in Johnny Logan has turned into ashes. At another point, Vienna claims that Emma’s undying hatred for her stems from her inability to accept that she’s sexually attracted to The Dancing Kid, but more than one commentator has surmised that some other form of puritanical repression and transference — maybe even a denial of her lust for Vienna — might be involved. (Indeed, one could argue that the only evidence of visible and unbridled sexual excitement in the entire film is Emma’s look of ecstatic triumph as Vienna’s saloon is going up in flames.)  No one — except, perhaps, for an old-school meanie and self-absorbed villain like Bart — is entirely whom he or she seems to be, despite the apparent necessity to proclaim who and what s(he) is at every turn, which only begins to account for some of the existential conflicts involved. And in keeping with some of Ray’s other films, even though the romantic relationships in Johnny Guitar are peppered with rivalries, resentments, and bitter regrets, many surrogate families abound: Vienna and her employees, her maternal bond with Turkey, The Dancing Kid and his gang, and even the members of a funeral party that quickly mutates into a lynch mob. 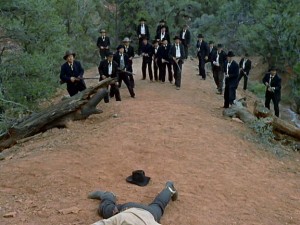 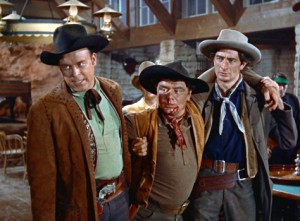 All these characters have troubled and anguished backstories that are only partially spelled out, and the actors’ and director’s backstories play some part in these fragmented legacies. One might even postulate that the fact that all four of the actors playing The Dancing Kid’s gang—Scott Brady, Ernest Borgnine, Ben Cooper, and Royal Dano — were New Yorkers contributed to the contemporary hipster atmosphere that Ray already brought to his more personal projects, in this case lending a touch of city smarts to the pastoral and frontier settings. And even though Nicholas Ray is commonly regarded nowadays as the sole auteur of Johnny Guitar, there’s plenty of evidence to support Joan Crawford as a full partner in some of the creative decisions, for better and for worse, starting with the fact that she was the film’s producer. Her famous feud with Mercedes McCambridge during the film’s production, which led to her shredding Emma’s costumes and scattering them on the street after McCambridge was applauded by the crew for her performance, and was followed by her bringing in Philip Yordan to write “five new scenes,” was clearly stoked by her former romantic and sexual entanglements with both McCambridge’s current husband (the Canadian producer, director, and actor Fletcher Markle, best known for his work in radio and television) and, more recently, with Ray himself.  It was undoubtedly exacerbated by Ray’s friendship with McCambridge, by most of the crew and other actors taking sides with McCambridge in the feud, and by the fact that the local and eventually the national press (including Los Angeles newspapers and Confidential) had a field day with the battling female egos, which may have helped to secure the film’s commercial success. Hayden, who was still traumatized by his recent testimony as a “friendly witness” before the House Committee on Un-American Activities, and who didn’t know how to play a guitar, ride a horse, or fire a gun, was sufficiently alienated from the emotional crossfire and tensions on the set to consider the film a dud, and later declared, “There is not enough money in Hollywood to lure me into making another picture with Joan Crawford. Her treatment of Mercedes was a shameful thing.” 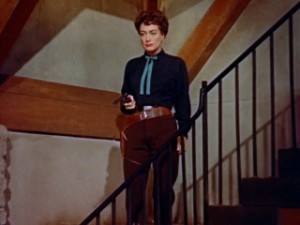 The film’s original script was written by a friend of Crawford’s, Roy Chanselor, adapting his own novel, which was likely written with Crawford in mind, and one of her reasons for summoning Philip Yordan — a celebrated script doctor (as well as a blacklist front) — to the Sedona, Arizona location to write new scenes was to make her part more that of a male lead. As Yordan recounted her instructions to Ray’s first biographer, Bernard Eisenschitz (in Nicholas Ray: An American Journey (London/Boston: Faber and Faber, 1993), “She said that she wanted to play the man’s role. She said, ‘I’m Clark Gable, it’s Vienna that’s gotta be the leading part.’” And according to Ray’s second biographer, Patrick McGilligan (in Nicholas Ray: The Glorious Failure of an American Director, New York: HarperCollins, 2011), Crawford complained to Yordan, “ I have no part. I just stand around with boots on and have a few stupid scenes. I want to play the man. I want to shoot it out at the end with Mercedes McCambridge and instead of me playing with myself in a corner. Let Sterling play with himself in the corner….” 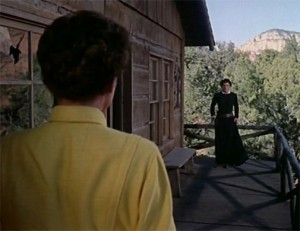 It’s also clear that Ray collaborated with Yordan on writing the new scenes, although the extent of their collaboration has never been fully clarified, so that one can’t establish beyond a shadow of a doubt that it was Ray who wrote the famous dialogue between Vienna and Johnny quoted above, much as Ray’s champions have always wanted to attribute it to him. (According to Yordan again, Ray “collaborated with me less on the dramatic than on the architectural level, creating settings like the saloon, working on the geometrical relationships between places.”)

Ray embarked on this film with expectations of it being his first effort as an independent producer (as well as director), but once Crawford took over enough of the production to crowd out his producer’s credit, his personal stamp, while still visible, wasn’t as comprehensive as what he’d hoped for. Where it flourishes most clearly is in the décor and costumes, the vibrant color-coding and the intensity of the actors’ performances. Having virtually begun his career as a student of Frank Lloyd Wright, a member of Wright’s Taliesin Fellowship (a stint that proved short-lived, apparently due in part to Ray’s bisexuality and Wright’s homophobia), Ray shows that influence most strikingly in the interior design of Vienna’s saloon—the integral use of red rock and the shape of the rafters. As for the color-coding, what he does with red, yellow, and black becomes as integral to the dramaturgy as it would be the following year in Rebel Without a Cause, with such items as Vienna’s and Turkey’s shirts and Emma’s mourning veil playing central roles. 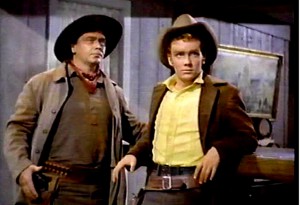 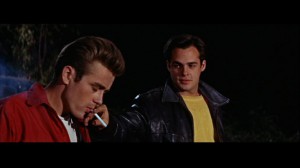 Yet for all its modernity, what still makes Johnny Guitar fit Truffaut’s description as the “Beauty and the Beast” of Westerns is its poetry, its feeling of timeless myth — its ordering of all four elements (red rock, air, fire, waterfall) into the shape of a fairy tale or a folk ballad. Given Ray’s experience during the Depression of collecting and recording folk music with Alan Lomax, his brilliant uses of Victor Young’s evocative title tune, which sounds both traditional and contemporary, encapsulate the film’s double-dealing strategy of seeming both historical and up-to-the-minute. 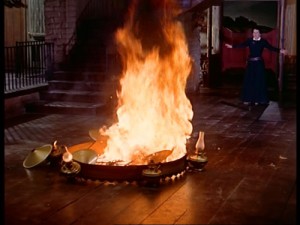 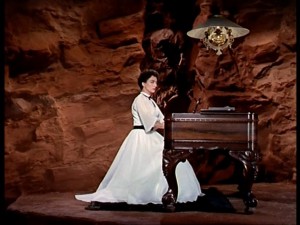