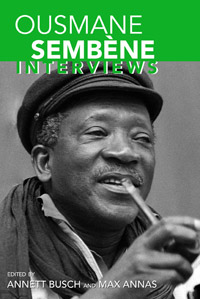 What an absurdly arduous and uphill battle it’s been, to understand even the rudiments of African cinema! I now have three books about the father of African cinema, but it hasn’t been until I started looking at the third that I began to pick up some fundamental, basic data. I’m thinking in particular of Sembène’s first feature, La noire de… (1966), known inadequately in English as Black Girl, only 65 minutes long. Yesterday, on one of my periodic trips back to the Chicago Reader to collect mail that still erroneously or fortuitously gets sent to me there, I was delighted to find a copy of this new volume, the latest in an excellent series of interview collections, unwrapped in my mailbox.

In 1995, I devoted a long review in the Reader to Black Girl, Sembène’s remarkable adaptation of his own story, “Promised Land” (which can be found in his collection Tribal Scars). By the time I reprinted this in my 1997 Movies as Politics, I was able to add a footnote correcting a false supposition I’d made about a color sequence that was in some prints of the film, but not in any I’d seen, after a friend who’d seen this sequence wrote me about it. And I finally was able to see this sequence when I booked the film for my 1960s world cinema course last March. But in the meantime, lamentably, when New Yorker Video finally brought the film out on DVD a few years ago, this color sequence was missing, as I noted in my DVD column in Cinema Scope, and the person in charge of the release later told me she hadn’t even known about its existence.

In the second interview in this collection, Sembène explains that the film was originally meant to be about 90 minutes long, and he had to cut it down so that it could qualify as a short—-apparently the only way he could get the film authorized by the CNC (the National Center of French Cinema) and secure distribution. The original idea was to show everything seen by the title heroine when she first arrives in Antibes “in pink,” and the film would switch to black and white “once reality appeared to her, and she [sank] into it.”

The first piece in this collection is no less illuminating: a polemical exchange between Sembène and Jean Rouch in 1965 in which he accuses Rouch “and the Africanists” of “[looking] at us as if we were insects.” He does, however, single out three films of value about Africa that were made by non-Africans: Rouch’s own Moi, un noir, Come Back Africa, and Les Statues Meurent Aussi. [8/6/08]