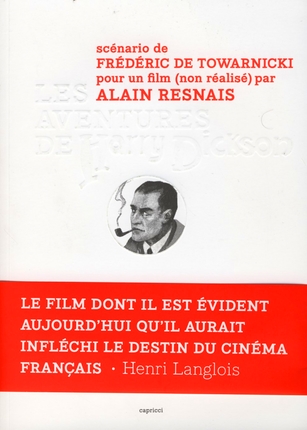 Only in France, I suspect, could a dream book of this kind ever have been conceived, much less realized – or done with so much exquisite beauty and care. The centerpiece here is the final draft of the screenplay for what likely qualifies as the most cherished of Alain Resnais’ unmade films — based on the fantasy dime-novels that first appeared in Germany in 1907, were translated into French the same year, then translated into Dutch in 1927, and finally continued by Belgian writer by Jean Ray in the 30s, who started out by translating the Dutch series into French. All these books recount the eerie exploits of Harry Dickson, “the American Sherlock Holmes” — born in the U.S. but educated and based in London. Resnais’ adaptation, developed over most of the 1960s and prefigured to run about three hours, was to star Laurence Olivier in the title role and Delphine Seyrig as super-villainess Georgette Cuvelier, alias The Spider, with whom Dickson sustains a long-standing love-hate relationship. (She’s the daughter of Professor Flax, a mad scientist who served as the supervillain in some earlier episodes.)

In short, one might say that LES AVENTURES DE HARRY DICKSON would have been Resnais’ own special variant of a Louis Feuillade serial, but clearly no simple pastiche: it was to be shot in color, but a form of color that would gradually evolve into some sort of monochrome (reportedly either black or blue) to match the development from reality to fantasy while the narrative style would gravitate towards opera: the lyrics to no less than 30 songs designed for inclusion were written and are included in this book. Other extras: a lengthy interview with the screenwriter, Frédéric de Towarnicki (a friend and fellow Jean Ray buff whom Resnais met in Nice in 1941); a reproduction of 16 photographs taken by Alain Resnais and drawn from his 1974 book REPÉRAGES (a collection of the 77 location-scouting photographs he took for the film between 1956 and 1971, which I’ve treasured ever since it came out); and a selection of eight full-color covers of the original novels, similar to those reproduced here – plus a list of the 170 previous adventures reproduced from one of them. [5/26/08] 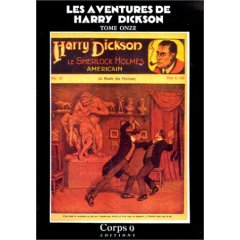 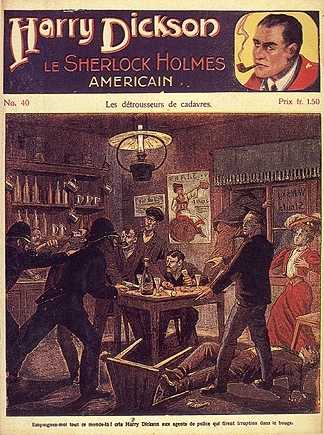