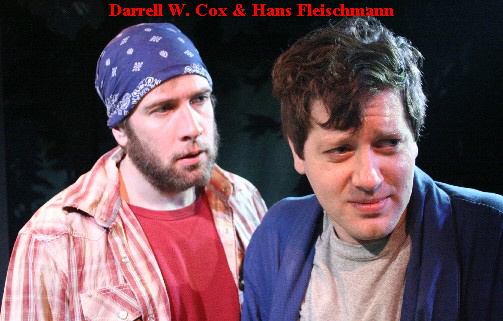 I attended this excellent production exactly a week ago, after discovering that it was playing in my neighborhood, only a few blocks from where I live. As a film critic, I’ve seen five features that LaBute has directed, and liked most of them: IN THE COMPANY OF MEN, YOUR FRIENDS & NEIGHBORS (the only one I didn’t like), NURSE BETTY (the only one he didn’t write or cowrite), POSSESSION, and THE SHAPE OF THINGS (probably my favorite).

This is a fairly compact three-act, three-character play without an intermission, each act running, if memory serves, for about half an hour. Each act begins with one character saying to another, “Go for it,” which is only one of the interesting rhyme effects. Most of it’s about the agonized and edgy relationship between two brothers, both in their 30s, although a teenage girl figures in the middle act, and this being a LaBute play, the onstage flirtation between her and the older brother, which may or may not lead to offstage sex, is really an act of aggression—the brother’s revenge against her offstage father (whom she may also want to get even with), a pivotal offstage character in Acts 1 and 3.

It’s a compelling story and production, but I emerge somewhat unclear about a few plot details, so I order a copy of the play, which arrives a few days later—and which adds to my confusion as much as it clarifies, because it turns out that LaBute has extensively revised the play—what I’ve purchased is called the “Off-Broadway edition”—and the version I saw is the first one. “This one did not come easy” is the opening sentence of LaBute’s Preface (which also reveals that the title comes from Ingmar Bergman’s SCENES FROM A MARRIAGE). It might be interesting to compare the two versions—LaBute himself proposes this as a possibility—but Amazon, which sells only one edition, the second, wittingly or unwittingly offers glimpses only of the earlier version in its Online Reader.

The story revolves around one or more acts of childhood sexual abuse, and LaBute reveals briefly at the end of his Preface that he was abused as a child. Which may help to explain why sex in his plays often turns out to be a form of aggression. [6/1/08]