It’s characteristic of the virtues and limitations of French sexual provocateur Catherine Breillat (Romance, Anatomy of Hell) that they usually derive from the same source—the fearless determination to skirt the borders of camp. In her avowedly free adaptation (2007) of Jules-Amedee Barbey d’Aurevilly’s 1851 novel about the protracted amour fou between a foppish narrator-hero (androgynous Fu’ad Ait Aattou) and his Spanish mistress with a taste for blood (the pouty Asia Argento), both of whom are periodically married to aristocrats, she revels in the kind of overripe French romantic and mythical filigree that the material seems to invite. She may be serious about creating period ambience, but she also can’t resist patterning her heroine after Marlene Dietrich’s Concha in The Devil Is a Woman (even though Argento sometimes suggests Maria Montez in the pleasure she takes in her own company) and using as a location for the hero’s modest country estate what appears to be the same 12th-century fortress in Brittany used in The Vikings(1958) and Jacques Rivette’s Noroit. With Michael Lonsdsale, Roxane Mesquida, and Claude Sarraute. In French with subtitles.

In the “Publications and Events” section of this web site, I’ve written, “I don’t know when `A Few Eruptions in the House of Lava,’ my commissioned piece about Pedro Costa’s 1994 CASA DE LAVA, will be appearing in a bilingual or trilingual collection about Costa edited by Ricardo Matos Cabo, the publication of which has been delayed many times. At some point I hope to print or reprint this essay on my site.”

I hope Ricardo doesn’t mind me jumping the gun. I sent him this essay in mid-January, and I’m moved to post it now as a sort of gesture of solidarity with COLOSSAL YOUTH having just appeared on the cover of the the summer issue of Film Quarterly — and James Naremore writing about it inside the magazine as his favorite movie of 2007. (2010 footnote: Ricardo’s collecion has been out for some time by now. It’s very beautiful, even if it’s only in Portuguese.) — J.R. 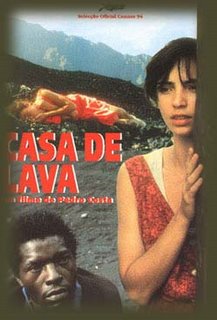 I know I’d go from rags to riches
If you would only say you care
And though my pocket may be empty
I’d be a millionaire.

My clothes may still be torn and tattered
But in my heart I’d be a king
Your love is all that ever mattered
It’s everything. Read more

I’m really sorry that in the Gene Siskel Film Center’s forthcoming and very welcome Manoel de Oliveira retrospective, three of my five favorite films of his are missing. I can be pretty specific about this because I recently ranked all the Oliveira films I’ve seen in order of preference for a lengthy article I wrote about him for FILM COMMENT, which is about to come out. The first five of my favorites, in descending order, are DOOMED LOVE (1978), BENILDE OR THE VIRGIN-MOTHER (1975), INQUIETUDE (1998), PORTO OF MY CHILDHOOD (2001), and MON CAS (1986). The last of these (see first photo below) has never been shown in Chicago and I’ve never even been able to see it in an English subtitled version (assuming that one exists). BENILDE (see second two photos, below–both screengrabs from a mediocre video transfer, so I’m sorry they don’t look better) is a film I was able to bring to Chicago several years ago, when I selected it as a Critic’s Choice at the Chicago International Film Festival (which, if memory serves, has also shown INQUIETUDE and PORTO OF MY CHILDHOOD); it still remains, to my mind, the most underrated and underseen of all of Oliveira’s major works. Read more 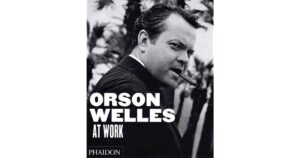 Considering how much popular currency is enjoyed by works about Orson Welles that are poorly researched, possibly because they respond so dutifully to existing attitudes and mythologies about the man — most notably, David Thomson’s slipshod biography Rosebud and Michael Epstein and Thomas Lennon’s Oscar-nominated but fanciful documentary The Battle Over Citizen Kane (both 1996) — a reliable book about his filmmaking that doesn’t stoop to special pleading is always welcome. This one, originally published in French a couple of years ago — in an ongoing series of beautifully and copiously illustrated coffee-table books that has already yielded Bill Krohn’s indispensable Hitchcock at Work — is special not just for the amount of fresh information it offers. It’s also invaluable because of the unusual perspectives its two authors bring to their subject.

Jean-Francois Berthomé, author of a definitive book on Jacques Demy, is also an expert on movie set design, the subject of another of his books. François Thomas, an Alain Resnais specialist, once wrote a dissertation on Welles’s sound work (in film, radio, TV, and theatre) that was over a thousand pages long. Read more