King of the Hill

The most impressive thing about Steven Soderbergh’s third feature (after sex, lies, and videotape and Kakfa) — an adaptation of A.E. Hotchner’s childhood memoirs, rich in period flavor — is that it’s set in Saint Louis in 1933, roughly three decades before Soderbergh was born, yet it offers a pungent and wholly believable portrait of what living through the Depression was like. Soderbergh gets an uncommonly good lead performance out of Jesse Bradford as the resourceful 12-year-old hero, living in a seedy hotel and steadily losing the members of his family: his kid brother (Cameron Boyd) gets shipped off to an uncle, his mother (Lisa Eichhorn) to a sanitarium, and then his German father (Jeroen Krabbe) goes off to try to make money as a door-to-door watch salesman. We also learn a fair amount about the hero’s neighbors (Spalding Gray, Elizabeth McGovern, Adrien Brody) and schoolmates, and Soderbergh does a fine job of keeping us interested and engaged without stooping to sentimentality. This is a lovely piece of work. Fine Arts. 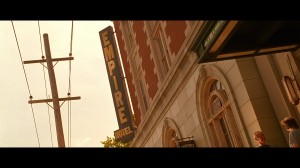