A column for the Spanish magazine Caimán Cuadernos de Cine. I believe it was written circa May 2014-.  J.R. 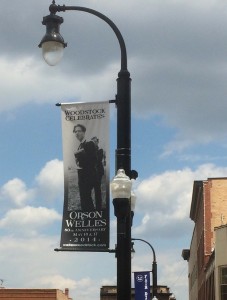 I’ve recently returned from Woodstock Celebrates Orson Welles, a delightful two-day event in Illinois (16-17 May) organized by Kathleen Spaltro and commemorating the 80th anniversary of the Todd Theatre Festival held at the Woodstock Opera House in 1934, orchestrated by Welles at the age of 19 and sponsored by his mentor and one of his lifelong best friends, Roger Hill — headmaster of the Todd School for Boys, which Welles attended from 1926 to 1930. 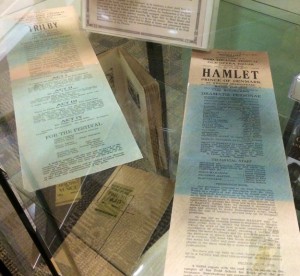 When Welles graduated from Todd, Hill wanted him to attend Harvard while Welles’ guardian, Dr. Maurice Bernstein (whom Everett Sloane’s character in Citizen Kane was named after), hoped he would go to Cornell. But Welles, still under the spell of an article published by one of Chicago’s leading drama critics, Ashton Stevens (who wrote for the Chicago Herald-American, a Hearst newspaper, and was the model for Jed Leland in Kane), predicting that the young genius was destined to become a major actor, didn’t want to go to college. So a compromise was struck:  Welles would travel to Scotland, Ireland, and England on a sketching tour before embarking on any formal education, writing letters home to chart his progress and his adventures. 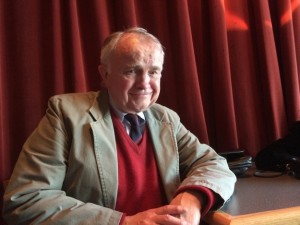 About a month later, Welles found himself virtually penniless in Dublin, where he talked his way into a job working for the newly founded Gate Theatre under the tutelage of Hilton Edwards and his acting partner Micheál Mac Liammóir, where he remained until March 1933. Then, after directing a production of Twelfth Night back at Todd, traveling to Morocco and Spain, and touring for 36 weeks with director Guthrie McClintic and actress Katherine Cornell in productions of Romeo and Juliet, The Barretts of Wimpole Street, and Candida, he collaborated with Hill in the editing of textbook editions of Shakespeare plays entitled Everybody’s Shakespeare, to be published at the Theatre Festival, where Edwards and Mac Liammóir were invited to help stage Hamlet, Tsar Paul, Trilby, and The Drunkard. During the same summer in Woodstock, Welles codirected his first film, a five-minute silent spoof called Hearts of Age. 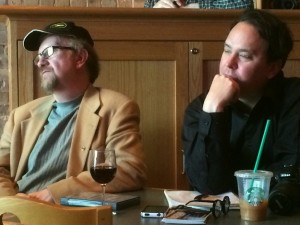 A 90-minute train ride from Chicago, Woodstock retains much of the period flavor of its past, including a town square where its Opera House still stands. Most of the weekend celebration occurred at the Stage Left Café next door, with an audience split between locals with only a slight familiarity with Welles and diverse Welles enthusiasts who traveled from as far away as Seattle (actor and Welles lookalike Erik Van Beuzekom, seen in above photograph with Michael Dawson). Among the participants were Joseph McBride (Welles biographer and actor in the unfinished The Other Side of the Wind, seen on the right in the below photograph), filmmaker Michael Dawson, Josh Karp (author of a forthcoming book about The Other Side of the Wind, seen in the middle in the below photograph), Jeff Wilson (founder of the online Wellesnet.com and specialist in Welles’ radio work, seen on left in the below photograph), Hill’s grandson Todd Tarbox (author of the recent Orson Welles and Roger Hill: A Friendship in Three Acts, seen above, in the third photograph), who delivered the keynote address, and myself. 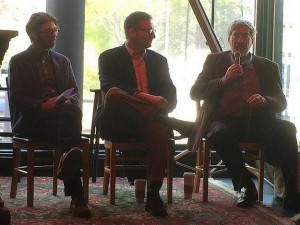 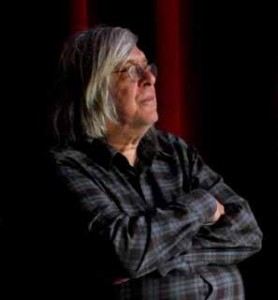 I’d been asked to speak about Welles in Dublin, but I decided that Welles’ underrated gifts as a writer (including his letters home to Bernstein and Hill, some of them excerpted in Tarbox’s book) were far more durable and easy to discuss than his work as an actor in Ireland. Indeed, Welles often regarded writing as a form of acting, and this is no less true of the neglected writerly talents of Chaplin and Stroheim (to cite only two other major writer-director-actors). I went on to argue that the things I’m proudest of accomplishing as a Welles scholar aren’t so much the editing of This is Orson Welles as the publication of his unfilmed 1982 screenplay The Big Brass Ring, which reads more like a novel than a film script (and for me remains the greatest and most revealing of all his “finished” late works), and the posting online of the movie theater sequence from his unfinished film Don Quixote. Both of these creations, I should note, are intimately bound up with Welles’ affinity for Spain (most of The Big Brass Ring is set in Barcelona and Madrid), and it seemed entirely appropriate that Karp’s presentation about The Other Side of the Wind, which started out as a film about Spanish bullfighting, included screening an excerpt from the Spanish TV documentary El Americano (2004). 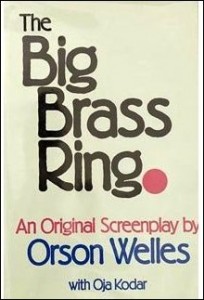 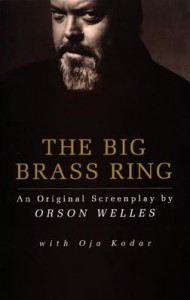 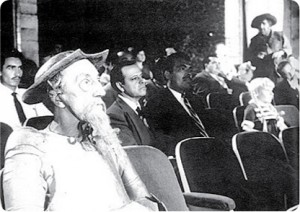