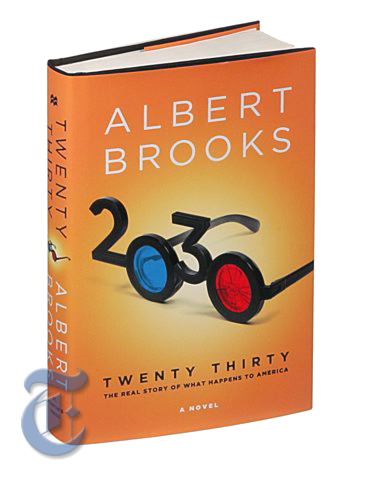 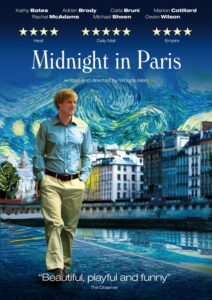 One wouldn’t expect Albert Brooks’s first novel (Twenty Thirty: The Real Story of What Happens to America) and Woody Allen’s latest movie (Midnight in Paris) to have much in common, especially after one considers that the former is set 19 years in the future whereas the latter is set at least partially between eight and nine decades in the past. But the main thing they do have in common is in fact very contemporary — a preoccupation with money, which Brook’s novel is especially up front about. Both are also ultimately more interested in wisdom than in laughs (or, for that matter, in literature, at least for its own sake); Brooks’s own form of humor, which he seems to find impossible to suppress, is mainly a creative form of sarcasm, which he plants in many of his characters (all of them male, as it happens); more generally, much of his novel’s tone is fairly dour and cautionary. And the principal thing it’s dour and cautionary about is a very contemporary preoccupation with not having enough money.

According to Brooks’s novel, the increasing longevity of the elderly thanks to improving health care (including a cure for cancer) gives them the status of a privileged class whereas the young are condemned to lives of indebtedness keeping the “olds” alive and in comfort. (This is an oversimplification of the future America depicted, where an outsized earthquake in Los Angeles also severely limits the options of at least one elderly character, but it does define the overall cultural and social drift.) And even though Brooks doesn’t bother with some of the staples of science fiction representing the future, such as inventing new slang words (he’s more interested in projecting a few new consumerist gadgets), he’s quite plausible when it comes to showing this country’s indebtedness to China as one of the key factors in determining various political aspects of its future.

To be fair, Allen’s film is partially a very apt critique of the fantasy that the past could represent any sort of Golden Age in relation to the present. (The only error that he commits here is his mislabeling Gil’s condition: everyone in the film seems to assume that this malady is called “nostalgia,” a confused use of that term that has been adopted by all the reviews of the movie that I’ve read, but the actual meaning of that term is “homesickness” — referring, in other words, to one’s actual past and background, not to any imaginary substitutes.) Gil, the hero played by Owen Wilson, a west coast screenwriter wrestling with his first novel while vacationing in Paris with his fiancée (Rachel McAdams) and her wealthy parents (in Paris on a business trip) at a classy hotel, wishes he were back in Paris in the 20s with Hemingway, the Fitzgeralds, Gertrude Stein, Picasso, Dali, Buñuel, etc., and it’s quickly made clear that his fantasy about this — like Allen’s and his intended audience’s fantasy — is (a) far from actual nostalgia and (b) strictly a middle-class notion about what’s alluring about chic and privileged bohemia, which is both classless and choked with celebrities, all of which seemingly makes everyone (Dali and Picasso, Hemingway and Stein, and even, say, Fitzgerald and Djuna Barnes, or T.S. Eliot and Cole Porter) artistic and social equals of one another as well as Gil. To all appearances, it’s retroactive celebrity itself that makes all of them kin.

So Picasso’s mistress can become entranced with Gil’s novel-in-progress after hearing Stein read aloud just a couple of (pedestrian) opening sentences, and Stein herself can later read the whole manuscript and also be duly impressed, although what actually impresses her is never made clear. It’s ultimately suggested that Stein’s acceptance is social rather than any sort of aesthetic evaluation, which is really the point — as it almost always is in Allen’s world, where scoring socially is everything. (By contrast, you’ll never find any hankering after bohemian life in Albert Brooks’ work; his turf is exclusively the mainstream.)

While the spending habits of Gil’s fiancée’s snooty, intolerant, and philistine parents are made to seem deeply offensive and anti-democratic, the spending habits of Fitzgerald & Company, as they dart off in their taxis to various parties and bistrots, are made to seem wholly egalitarian and reasonable, even enlightened. And what’s most egalitarian of all, it seems, is that everybody’s middle-class, to a demonstrable fault. (For me, the film’s funniest gag is Buñuel’s square inability to comprehend the outlandish premise of his 1962 The Exterminating Angel when Gil proposes it to him, thus making Buñuel in effect the blood brother of Gil’s odious prospective in-laws.) This is ultimately why Hemingway’s semi-authentic nostalgia about his own (allegedly) impoverished early years in Paris in A Movable Feast has no place in Allen’s version of nostalgia, which is chiefly about all the upper-crust parties Hemingway went to and the cabs he took to get to them. [5/21/11, amended 4/20/21] 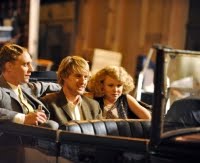