Lanzmann’s Second Thoughts: THE LAST OF THE UNJUST Claude Lanzmann, The Last of the Unjust, 2013, 16 mm and 35 mm, color and black-and-white, sound, 218 minutes. Claude Lanzmann and Benjamin Murmelstein.

THE LAST OF THE UNJUST, the latest of Claude Lanzmann’s footnotes and afterthoughts to his 1985 masterpiece, Shoah, functions even more than that earlier film as a dialectical palimpsest, so its successive layers — which remain in perpetual dialogue with one another — should be identified at the outset:

December 1944: Benjamin Murmelstein, a Vienna rabbi, is appointed by the Nazis as the third (and last) Jewish “elder” of Theresienstadt (Terezin, in Czech), a “model” or “showcase” ghetto set up in the former Czech Republic in 1941, his two predecessors having been executed the previous May and September. Murmelstein retains this position through the war’s end. Then, after spending eighteen months in prison for his collaboration with the Nazis, he is acquitted of all charges (although still widely despised as a traitor) and moves to Rome.

1975: Lanzmann films an interview with Murmelstein over a week in Rome — the first interview that he films for Shoah, although he later decides to discard it, donating the unedited footage to the United States Holocaust Memorial Museum in Washington.

October 2007: At the Austrian Film Museum in Vienna, Lanzmann views part of the unedited footage and decides to make a film out of it.

2012: In The Last of the Unjust, at age eighty-seven, Lanzmann revisits and films himself at the train station and camp of Terezin, reading passages from Murmel- stein’s book and other relevant texts and interspersing recovered artworks depicting camp life by inmates; he also films the Polish ghetto in Nisko that Murmelstein organized and visits synagogues with war memorials in Vienna and Prague, footage he intercuts with his 1975 interviews.

It’s obvious why Lanzmann left these interviews out of Shoah, where his focus was restricted to the mechanics of the Nazis’ extermination of Jews, not the means by which these deaths might have been delayed or prevented. But why did he wait so long — more than two decades after Murmelstein’s death — before airing this footage elsewhere? The question is not one the filmmaker seems prepared to answer directly, but The Last of the Unjust itself can be seen in part as an indirect answer, and one that entails some revisions to the methodology used in making Shoah. If there all archival material was systematically excluded, here some newsreel footage and drawings of the camp by inmates are permitted. Furthermore, Lanzmann has restricted his testimonies this time to those of Murmelstein, thirty-odd years ago, and his own today, sometimes reading the accounts of others. And once again he employs an achronological, associative structure — revisiting, for example, the execution site of Murmelstein’s predecessor, Paul Eppstein, quite late in the proceedings.

Part of the difference between the two films is signaled in the opening sequence, on a train platform, where, after watching two trains pass, Lanzmann gestures dismissively and declares, as if in defeat, “We can’t control the traffic” — something he was able to do with trains throughout Shoah. But, as if to vouchsafe his control of the mise en scène and decoupage all the same, he figures as much more of a physical presence here; the images we’re likeliest to carry away are of his own squat and stocky body, not those of Murmelstein. And if this seems at times oddly skewed, Lanzmann also convinces us it is unavoidable, because in effect he is the only witness left. Indeed, the strongest common thread between Shoah and this film is himself as existential witness.

As I wrote for this publication’s website a few years ago, “Shoah’s devastating impact and structure are predicated on a confrontational shotgun marriage between Lanzmann’s Judaism (signifying the past) and his existentialism (signifying the present) in which faces and voices recount remembered events while the camera lingers over locations where they once happened.” The refusal of archival material gave the words uttered in the present a privileged status; but if archival material is permitted in The Last of the Unjust, the work is no less an act of witness: Lanzmann witnesses his younger self as well as Murmelstein and various texts, and we’re asked to witness these along with the places that are filmed. In Shoah, Lanzmann was mainly interrogating other people; here he is interrogating Murmelstein, himself, his audience, and the places where the events occurred, and the fact that he lingers once again over the sites he films is, as it was before, a way of getting us to fill in those empty spaces with reflections.

We first see Murmelstein at the end of a pan across a Roman balcony that settles on the back of his thick neck, recalling the previously imparted information that both of his predecessors at Terezin were shot “in the back of the neck” — and thus suggesting that Lanzmann, the most confrontational of filmmakers, is doing the same thing, figuratively, with his camera. Yet, in the opening titles, Lanzmann has already said of Murmelstein, “He does not lie; he is ironic, sardonic, harsh with others and with himself” (though we don’t know if he would have said this back in 1975).

What does it mean to say “he does not lie”? The whole notion of the “showcase” ghetto, as Murmelstein’s own testimony confirms, was founded on lies he was coerced into supporting, and he even persuasively compares his own function with Nazi officials to that of Scheherazade, the tale-spinning queen of The Thousand and One Nights, who delays her own and others’ executions with her guile. And whether or not he tells only the truth to Lanzmann and to us — which seems to be what Lanzmann means by his assertion — is ultimately as subjective and unprovable as whether Eichmann should be regarded as banal, despite the fact that Murmelstein furnishes us with plausible countertestimony to shoot down certain aspects of Hannah Arendt’s thesis in Eichmann in Jerusalem: A Report on the Banality of Evil (1963). We know that Murmelstein was operating under impossible circumstances, and what he says to Lanzmann sounds convincing, but we also know that arriving at the truth about his actions thirty years later can’t be as simple or definitive as we would like it to be. This is where Lanzmann’s art as a filmmaker—as distinct from his skills as a journalist, historian, or thinker — comes into play, creating a space for us to ponder such issues. 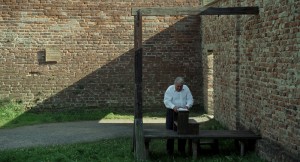 Indeed, the world is a big and complicated place, and surely there’s enough room in it to accommodate both Lanzmann and Arendt. But this is hardly the impression one gets from reading many of the recent responses to The Last of the Unjust. Lanzmann’s own “cleaving of the world into heroes and monsters” (as David Rieff put it in his eloquent and perspicacious review in The Nation of Lanzmann’s memoir, The Patagonian Hare) seems to provoke an automatic demonizing of Arendt in some of his champions. For instance: “In Shoah, [Lanzmann] worked against the grain of the dominant viewpoints of the time, most notably that of Hannah Arendt, who famously insisted on a blurring of responsibility between torturer and victim” (Kent Jones in Film Comment). Or, “The Last of the Unjust forces us to take another look at the efforts of people like Murmelstein, and the moral and intellectual bankruptcy of the arguments Hannah Arendt makes in Eichmann in Jerusalem” (Saul Austerlitz in Tablet).

Even more decisively, Mark Lilla, who is somewhat more careful in parsing the issues (though he blatantly mischaracterizes The Last of the Unjust as “a straightforward, chronological documentary”), writes in the New York Review of Books: “Lanzmann refuses to understand the Holocaust, let alone make peace with the world that made it possible. A short essay only three paragraphs long is his most powerful retort to Arendt: ‘All one has to do, perhaps, is pose the question simply, and ask, “Why were the Jews killed?” This shows its obscenity. There is an absolute obscenity in the project of understanding. Not understanding was my iron law during all the years of preparing and directing Shoah: I held onto this refusal as the only ethical and workable attitude possible. . . . “Hier ist kein Warum”: this, Primo Levi tells us, was the law at Auschwitz that an SS guard taught him on arriving at the camp: “Here there is no why.”’”

Yet clearly Eichmann in Jerusalem is concerned not with “why?” but with “how?” — the same question that preoccupies both Shoah and The Last of the Unjust (after all the “whys” of Murmelstein are addressed). And surely Arendt, like Lanzmann, needs to be judged separately as a journalist/historian, as a thinker, and even as an artist. Faulting her for errors in judgment regarding her tone as a journalist/historian, as Lilla does, is hardly the same thing as faulting her as a thinker. (Similar distinctions should be drawn regarding Lanzmann. As Rieff argues, his limitations as a journalist, historian, and thinker in Shoah, which often derive from “cleaving of the world into heroes and monsters,” clear the way for what he is able to achieve as an artist.) And to some degree, Eichmann in Jerusalem needs to be considered alongside Chaplin’s Monsieur Verdoux (1947) as a poetic, speculative, and suggestive reflection on the mediocrity of mass murderers, not simply or exclusively as a journalistic or historical “report” to be accepted or rejected for factual accuracy.

At no point did Arendt “insist” on or even faintly suggest any “blurring of responsibility between torturer and victim.” What was “famous,” alas, was the blurring of any clear distinction between messenger and message on the part of her accusers when a few of her remarks were taken out of context — which, as Jones’s assertion demonstrates, continues up to the present, and will continue as long as such “paraphrases” are deemed acceptable as substitutes for Arendt’s prose.

Fortunately, Lanzmann’s achievements as a filmmaker and artist surpass his attainments as a journalist, and are even likely to outlive them — though the principled journalistic act of offering us hard-won and difficult material to sift and ponder is a key prerequisite for his artistry. Above all, the conversation that he launches is as much with his audience—and with the silence of history — as it is with his interview subject.