ROOM 237 (and a Few Other Encounters) at the Toronto International Film Festival, 2012

MUBI’s posting of this film prompted me to repost the following. — J.R.

Like so much (too much) of contemporary cinema, Rodney Ascher’s Room 237 is at once entertaining and reprehensible. Alternating between the extravagant commentaries of five analysts of Kubrick’s The Shining (Bill Blakemore, Geoffrey Cocks, Julie Kearns, John Fell Ryan, Jay Weidner), it refuses to make any distinctions between interpretations that are semi-plausible or psychotic, conceivable or ridiculous, implying that they’re all just “film criticism” and because everyone is a film critic nowadays, they all deserve to be treated with equal amounts of respect and/or mockery (assuming that one can distinguish between the two) -– that is, uncritically and derisively, with irony as the perpetual escape hatch. Thus we’re told, in swift succession, that The Shining is basically about the genocide of Native Americans, the Holocaust, Kubrick’s apology for having allegedly faked all the Apollo moon-landing footage, the Outlook Hotel’s “impossible” architecture, and/or Kubrick’s contemplation of his own boredom and/or genius. Images from the movie and/or digital alterations of same are made to verify or ridicule these various premises, or maybe both, and past a certain point it no longer matters which of these possibilities are more operative. Unlike his five experts, Ascher won’t take the risk of being wrong himself by behaving like a critic and making comparative judgments about any of the arguments or positions shown, so he inevitably winds up undermining criticism itself by making it all seem like a disreputable, absurd activity. Read more

A Vigilance of Desire: Antonioni’s L’ECLISSE

A 2005 essay commissioned by Criterion for their DVD of Eclipse. — J.R.

Your vigilance as an artist is an amorous vigilance, a vigilance of desire. 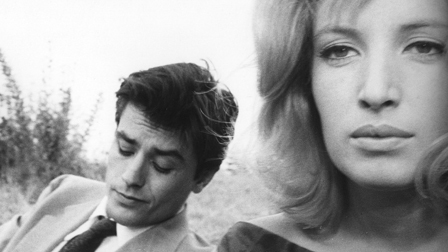 It’s lamentable that Michelangelo Antonioni, one of the most fashionable vanguard European filmmakers during the sixties, has mainly been out of fashion ever since. Part of this may be due to the sixties themselves — an era of artistic innovation when making ambitious films about the zeitgeist was still considered both possible and desirable — and all they’ve come to represent in ensuing decades. It seems that the curiosity and metaphysical doubts about the world, which resemble at times agnosticism about reality itself, are more easily tolerated when the glamour of that world is more readily apparent.

This was a time when intellectual activity about the zeitgeist could be debated, if not always welcomed, with Godard and Antonioni the two most commanding figureheads. L’eclisse (1962) appeared the year after Chronicle of a Summer, Last Year at Marienbad, and Paris Belongs to Us, the same year as The Exterminating Angel and Vivre sa vie, and the year before Contempt and Muriel — a period, in short, when large statements and narrative innovations often came together. Read more