Smell of Camphor, Fragrance of Jasmine 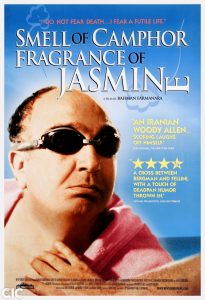 One of the more interesting personalities of the Iranian cinema, Bahman Farmanara produced a controversial early feature by Abbas Kiarostami (Report) and won praise for his own work, including the 1974 feature Prince Ehtejab. But he hit a government roadblock in the mid-70s, when all his proposals for films started getting rejected, and for much of the past quarter century he’s lived in the West (in Vancouver, among other places). In this welcome comeback (2000) he plays a middle-aged filmmaker rather like himself who ruefully accepts a commission to make a documentary for Japanese television about Iranian death rituals. His wife has been dead five years (though Farmanara’s wife, to whom the film is dedicated, is alive and well), and after discovering that the cemetery where he expects to be buried has planted someone else next to her, he embarks on the strange experience of witnessing his own funeral, one of many fantasy sequences. This oddball comedy, a selection at last year’s New York film festival, is full of wry asides and unexpected details that tell us more about contemporary Iran than we’d normally expect to find in a recent feature. I’m not sure how successfully all the pieces fit together — ultimately this is more a film of ideas than of memorable sounds and images — but it’s still a fascinating and entertaining piece of work. 93 min. Music Box, Friday through Thursday, September 7 through 13.