I devoted almost an entire page in my first book, a memoir, to this unsung obscurity, a low-budget comedy western that I saw in Florence, Alabama with my brother Alvin on November 14 or 15, 1951, when I was eight and he was six, on a double bill with Edgar G. Ulmer’s The Man from Planet X. I can very nearly classify this viewing as my first cinematic encounter with the avant-garde, by which I mean something akin to what J. Hoberman calls Vulgar Modernism — eight months after what might have been my first non-cinematic encounter with the avant-garde when I attended a Spike Jones concert one Sunday afternoon at the Sheffield Community Center. Bear in mind that I saw Skipalong Rosenbloom a full year before the first issue of Mad (the comic book) appeared and almost two years before I bought my first issue (no. 6, August-September 1953); this was also a full year before I saw Frank Tashlin’s Son of Paleface. It’s quite possible, of course, that I’d already seen one of Tex Avery’s cartoons by then, but if I had, this fact couldn’t be traced by the same methods of research that I employed in my memoir, Moving Places: A Life at the Movies, which mainly involved combing back issues of the local Florence newspaper on microfilm for movie ads. 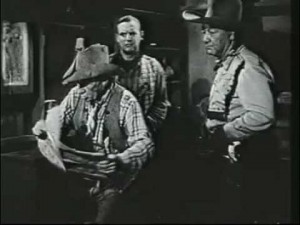 The movie presents itself frankly as a western seen on TV, complete with mock commercial breaks, and is full of deconstructive gags and details. The title hero, played by former (1930-34) World Light Heavyweight Champion Maxie Rosenbloom, is overweight, has trouble climbing on or getting off his horse, can’t carry a tune or read or even recite the alphabet, but like Avery’s Droopy he can usually outsmart and outshoot everyone in sight. When one villain tries to steal his stash of alleged riches (which later proves to be a collection of bottle-tops) while he’s sleeping, Skipalong manages to shoot the bag from his hands in his sleep, and then, while the varmint hurriedly rides off, calls out, “Don’t stop to pick up no daisies,” though a quick cutaway shows the thief stopping long enough to do precisely that. In my favorite surreal touch, occurring much later, a map to a lost gold mine that will enable Skipalong to pay off his grandpappy’s mortgage turns out to be a mail-order square dance lesson from Sears and Roebuck. 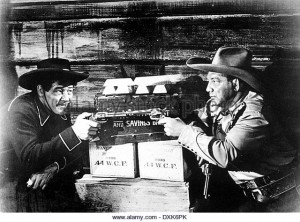 This movie was so scarce when I originally posted this in late 2008 that the only illustration I could dredge up, quite unrepresentative, was one measly poster, now replaced by a better one, and no stills. But I managed to recall many more details in this movie after coming across the script, quite by chance, in the Information Department of the British Film Institute while researching Moving Places in December 1977. Reseeing the movie was a lot harder to accomplish and took me roughly three decades. I finally managed to track down a VHS copy circa 2007, under its rerelease title Square Shooter, from Movies Unlimited, which has subsequently removed it from its hefty catalog, and I finally watched it all the way through this afternoon. [2016: Eight years later, it has become widely available on DVD–see below.] 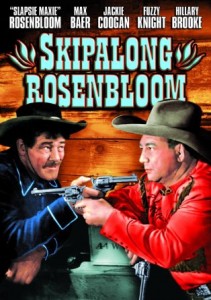 I’m sorry to say that the movie’s precredits prologue, recounted in Moving Places, is missing from Square Shooter (so named because Skipalong carries guns with square barrels and bullets). But Junior — the little boy in a cowboy suit in this prologue who orders his father at gunpoint to switch channels from either Round Table for Square Heads (Father’s favorite show) or Nellie Nylon’s Latest Creations (Mother’s favorite) to Skipalong Rosenbloom — does appear to turn up in the movie itself much later, shortly after a commercial for a breakfast cereal called Crummy, as The Pecos Kid (Whitey Haupt), who identifies himself as the son of the show’s sponsor. If I’m right about this hunch, this close association of spectator with advertiser may have been the most avant-garde gesture of all. [11/16/08] 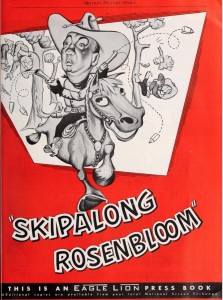